Ratings, rankings and lists worth clicking

So much of our lives revolve around lists. We have grocery lists and to-do lists. We make wish lists for the things we want, and do our best to stay off mailing lists. There are lists of baby names before we enter the world, and lists of our worldly belongings when we leave it. Is it any wonder we’re so drawn to them as a way to record, organize and understand the world around us? 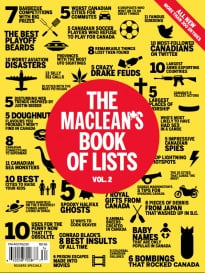 That was our thinking last year when we set out to produce the first-ever Maclean’s Book of Lists, a compilation of all things Canadian. Like last year’s book, we knew this edition had to inform, entertain and surprise. Because of the phenomenal response we received last year, we also knew it had to be bigger and better. So we’ve packed it with even more lists, rankings and countdowns—322 in all.

The Maclean’s Book of Lists, Vol. 2 is now available at www.macleans.ca/bookoflists, in the iBookstore, and on newsstands as of June 24. In it, you’ll learn in which parts of the country Canadians are most satisfied in bed, which cities have the most UFO sightings, the nine strangest things to ever fall from the sky and even what Mark Twain thought of Canadian girls. We also went to prominent Canadians for personal lists, so you’ll get tips from Rick Mercer on how to rant, while Don Cherry sets out his nine steps to looking good in a suit.

We’ll be sharing a range of those lists here, at our newly-revived Blog of Lists, over the coming weeks and months.

FILED UNDER: Book of Lists