A fearless child, he was the first to try anything. After years living the life of a nomad, he finally found a place to call home. 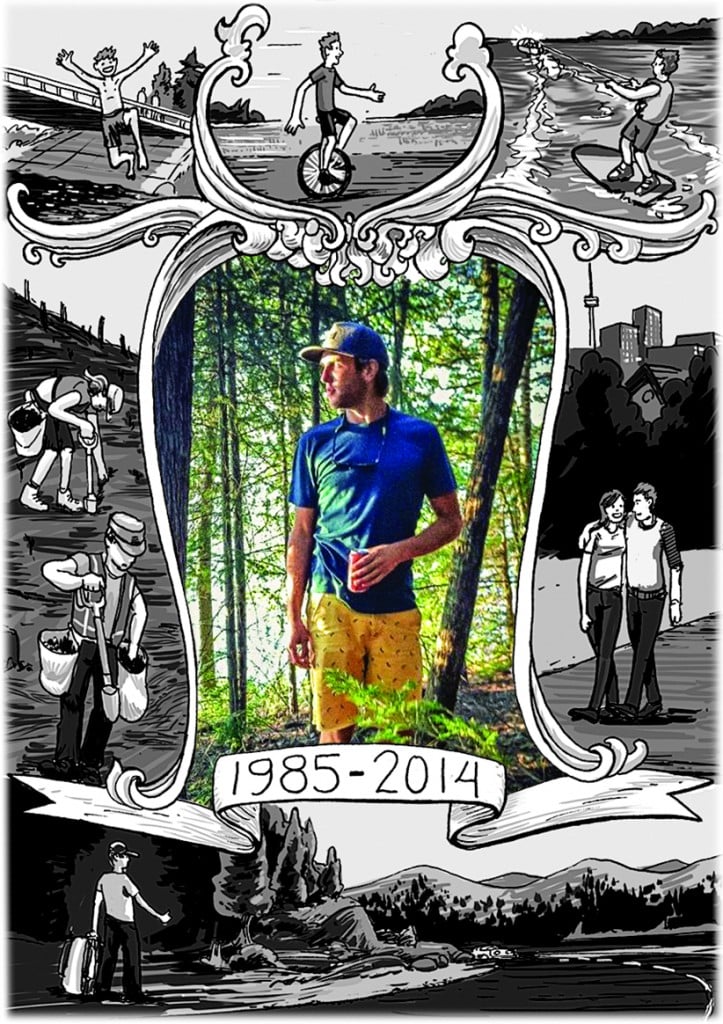 Jay William McGinn was born in Barrie, Ont., on Aug. 7, 1985. His arrival by C-section was delayed three hours after a thunderstorm knocked out the power at the Royal Victoria Hospital, recalls his mother, Lisa, a teacher. She and Jay’s father, John, who worked at private business colleges, separated a few months later.

Jay’s siblings, Jimmy and Molly (three and six years older, respectively), were delighted with the new addition to the family. (Another brother, Thomas, died shortly after birth in 1983.) “The day mom brought him home, my best friend and I sat on the couch and just took turns passing him back and forth,” Molly recalls. Around Jay’s first birthday, Lisa started dating Gerry Falls, a fellow teacher and father of two young boys, Nick and Tim. Soon, they melded into a family of seven, and the clan moved into a house in the Ottawa suburb of Kanata in 1991. Lisa and Gerry got married in 1993 at the family’s cottage on the Ottawa River.

Jay “was always the first one to try anything: jumping off a bridge, wakeboarding, riding a unicycle—if he wanted to do it, he would do it,” says Tim. During a family ski trip at Mont Cascades, Que., five-year-old Jay stuck his arms straight out and whipped down a run ahead of his siblings, maintaining remarkable balance until he wiped out and ran into a ski rack at the base of the hill. “He didn’t have a lot of fear,” says Jimmy.

Jay didn’t like being the centre of attention, but his warm, often offbeat sense of humour always roped people in—and sometimes the family Shih Tzu, too. “I could look at the top of the refrigerator, and there Ching would be in my salad bowl,” says Lisa.

In adolescence Jay was no angel, says his mom. In the wee hours of New Year’s Day 2000, after one too many drinks and getting lost on his way home from a party, Jay passed out on a stranger’s porch in the -30° C night. He was found the next morning near death with severe hypothermia and spent five days in hospital.

In 2003, when Jay was 17, John died in his sleep from a heart attack. His father’s death left a “pit of despair” inside him, says Molly. One summer, while hiking deep in the woods near the family cottage, his mom spotted an inscription Jay had secretly carved into a tree: “In memory of John McGinn.”

Jay also struggled in school and fell behind. In 2006, his teachers, charmed by his personality, appeared at the house to make sure Jay showed up to write his final exam to earn his high school diploma.

Jay was a true “nomad” at heart, Jimmy says, and after high school he moved from coast to coast. He worked odd jobs and snowboarded in Whistler, B.C., for a time. Once, he shipped home a pair of moose antlers he found while hiking. In the summer of 2010, he met Colleen Oldfield when the two were partnered as tree planters in Quesnel, B.C. They hit it off, spending their nights talking by the fire. “We started sharing a tent halfway through the season,” Colleen says, a tradition they would continue for four summers as they tree-planted in B.C. and northern Alberta.

Colleen returned to Toronto each fall, but Jay kept travelling. The night before his best friend Simon Taggart’s wedding in 2012, Jay showed up at his doorstep unannounced, “with long hair and a beard,” having made a three-day trek from northern B.C. “He had to hitchhike, catch a train, catch a bus and I think he caught a flight or two,” Simon recalls with a laugh.

Colleen was a grounding influence for Jay, and after years on the move, he moved in with her and some friends in Toronto in January 2013. It was the first time in his adult life he had a fixed address. In April, Jay found a job maintaining the greens at the Rosedale Golf Club. “I think he was comfortable with where his life was, so he didn’t need to keep being a nomad anymore,” Colleen says.

On May 9, Jay headed out with friends to celebrate Colleen’s 24th birthday. “It was the best birthday,” says Colleen—filled with drinks and dancing at a downtown bar. After last call, as the group headed out to fetch a cab, Jay wrapped his arms around Colleen and her roommate. “He kept saying, ‘The music was amazing, this night was amazing,’ ” she says. Exiting the cab Jay opened the passenger door for Colleen and stepped into the street as the cab’s passengers unloaded. As Jay was waiting, an allegedly impaired driver hit him, fleeing the scene. Jay was rushed to hospital and put on life support. He succumbed to his injuries five days later. He was 28.