A gregarious, gifted joke-teller, he missed just one Hamilton Tiger-Cats game in the 31 years he spent as the team's Pigskin Pete 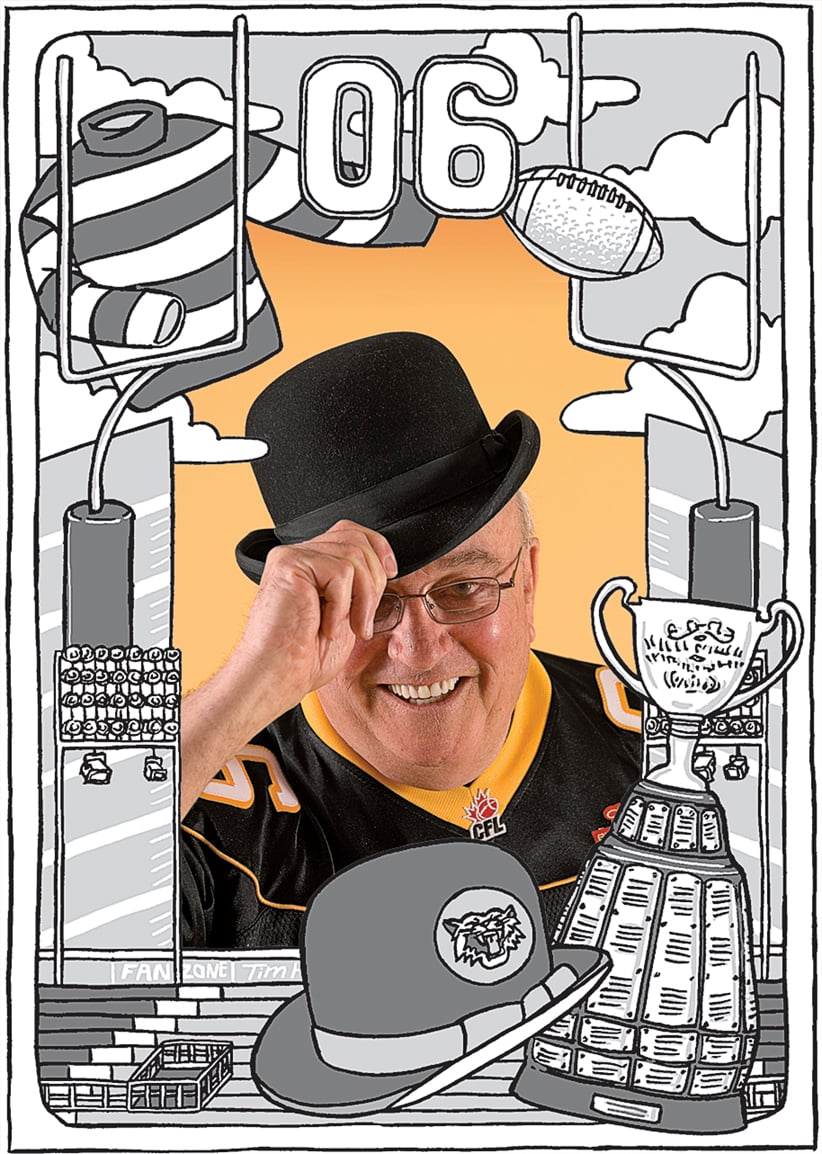 John Paul Weiler was born on June 29, 1934, in Montreal, to Wilbert Weiler and Olive Fallon. Olive was a stay-at-home mom and Wilbert worked as a seat upholsterer on railroad cars, a skill he taught Paul, who later covered seats for friends and in his own home.

Paul was one of six children in the Weiler family, which was known for its boisterous Christmases and Thanksgivings. He attended high school in Montreal up until Grade 10, after which he went to work for CN Rail as a brakeman. Next, he worked as a city bus driver. In 1962, he attended a friend’s wedding, where a friend of the bride, June Barrie, caught his eye. The pair began dating, spending their time with friends or at nightclubs. “I liked bowling, so he took up bowling with me,” June says. Two years later, in 1964, Paul got a job as a train operator for Dofasco, which took him to Hamilton. June decided to go with him. Shortly after, they got married. “It was a Monday morning at 7 a.m. We didn’t have a lot of friends, because we didn’t know that many people in the city, and we had the caretaker and the housekeeper of the church as our witnesses,” June says. “The housekeeper even made breakfast for us after our service.” After the wedding, Paul adopted June’s two sons from her previous marriage, Glenn and Douglas, aged 7 and 8.

In 1973, the pair bought tickets to a Hamilton Tiger-Cats game on a whim. “The first game we went to, it just poured,” June says. “But we thought it was a fun time.” Paul had always been a football fan, originally rooting for the Montreal Alouettes. The couple continued to go on and off for a few years, until June got a job doing clerical work at the Quarterback Club, a football society. There, the Ticats team president, Ralph Sazio, met Paul and was struck by his gregarious nature. “Paul always loved to tell jokes,” says June. “It was like a tape recorder in his head—he could rhyme them off like crazy.” The Ticats were looking for a replacement for the team’s second Pigskin Pete, the tireless cheerleader who’d been donning a bowler hat and black-and-yellow striped jersey to rally the crowd at games since the 1920s. At first, Paul was nervous. “He said, ‘Do you think I can do it?’ I said, ‘Well, you’ll never know until you try,’ ” June says.

In June 1976, Paul led his first of the famous Ticats cheer, the Oskee Wee Wee: “Oskee wee wee! Oskee wa wa! Holy mackinaw! Tigers! Eat ’em raw!” He’d lead nearly 20,000 more cheers during the 330 games he’d attend as Pigskin Pete, and go to countless events, including weddings, charity fundraisers and even a funeral. When the Ticats won the Grey Cup in 1986, Paul and June both got to guzzle champagne from the trophy. He missed just one game in 31 years. “He loved doing it. I think he was proud to be an example for the city of Hamilton and the fans,” June says.

Paul retired in 2006, when climbing the stairs of Ivor Wynne Stadium grew too much for his knees. That meant more time to spend with his family—his two sons, their wives, five grandchildren and one great-granddaughter. The family would head down to Paul and June’s trailer in Youngstown, N.Y., on summer weekends, and spend Saturday mornings scouring garage sales. “He could get us all toys for 25 cents,” says his granddaughter, Stephanie Weiler. “He spoiled us rotten.” In the evenings, Paul would fire up the barbecue and cook for everyone. He’d later teach Stephanie to cook, too, whipping up meals such as his beloved spaghetti or pork in white wine sauce. “All my friends used to call him Papa. Dinner at his place, everyone was welcome,” she says. And, of course, he continued going to Ticats games, bringing his grandchildren along and giving them the VIP treatment.

Paul passed on his bowler hat to Dan Black in 2007. (The actual hat, size 7 7/8, was too big for Dan.) “He’d tell me, ‘Some days, you’re going to feel like a cheerleader at Santa Claus’s funeral,’ ” Dan says. “When you’re down 36-0 in the first quarter, nobody wants to hear a cheer.” It never stopped Paul, he says, adding that it seemed as if Paul was friends with all 15,000 of the Ticats core fans. “He was just so friendly and out there, always with a smile.”

One day before the Ticats’ new Tim Hortons Field stadium was set to open on Sept. 1 for the Labour Day Classic, Paul came down with pneumonia and was admitted to hospital in Hamilton. There, even on medication, he watched on TV as his Ticats beat the Toronto Argos 13-12. On Sept. 10, he died in the hospital of a heart attack. He was 80.