Modern travel: Keep calm and carry it on 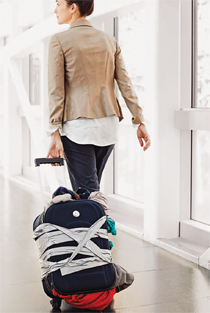 For the modern airline passenger, boarding a plane has morphed into a torturous Tetris-like ordeal—finding that last nook in the overhead bin to jam in your own, probably oversized, carry-on bag. And that’s after waiting ages in the aisle as the passengers ahead of you do the same. Carry-ons: such little bags, such huge headaches.

When the recession hit and fuel prices skyrocketed, airlines started charging for checked luggage as a way to boost margins. Now well into their recovery, airlines have stuck with the additional fees. Depending on the route, a second checked bag with Air Canada or WestJet can cost anywhere from $20 to $100. Air Canada’s passengers to the U.S. pay $25 for a single checked bag. The predictable effect has been passengers trying to avoid extra fees with carry-on bags ready to burst at the seams.

“Airlines somewhat have brought this on themselves by starting to charge [for checked bags] because people are going to try to avoid those charges,” says Karl Moore, a McGill professor and aviation expert. “If you’re going to have to pay $50, you’re certainly incented to avoid putting that luggage [in cargo] below.”

Those on the front lines are all too aware of the ways passengers try to outsmart the airlines. “It’s the domino effect,” says Michel Cournoyer, the CUPE airline division president, whose union represents Air Canada flight attendants. “It creates delays because at some point there are too many bags on board the aircraft.”

The first domino is already teetering by the time passengers buy their bags, since even those promoted for carry-on use are woefully oversized. Take the Heys “Equator” carry-on, advertised as taking “full advantage of the maximum allowance for carry-on luggage.” Yet its dimensions (21” x 15.5” x 9”) exceed WestJet’s carry-on size restrictions (21” x 15” x 9”). (Air Canada size restrictions are slightly larger.) Heys isn’t the only luggage company pushing the limits. Most bags now come with zippered expansion systems that, when used, will fatten bags to the point they’d never fit in the rigid metal measurement contraptions at airport gates.

Not that anyone is likely to ever check. On-time performance targets set by the airlines mean employees at baggage counters and gates rarely check carry-ons for weight or size. After three years of airlines charging for luggage, passengers have trained themselves to cram heavier items into the carry-on, putting them over the weight restrictions for those bags—approximately 22 lb. for most airlines.

Once on board, flight attendants are seldom around to help with the heavy lifting. One Air Canada flight attendant, who asked not to be identified, said the company instructs them to not to lift passengers’ bags because they are not insured in case of injury. And so passengers struggle in the aisles to hoist their bags, causing even more boarding delays.

Passengers may fume about a lack of space, but airlines aren’t complaining. The move to charge for luggage has been a boon to their bottom lines. While figures for Canadian airlines aren’t broken out, U.S. figures show the top five U.S. airlines pocketed a combined $2 billion in baggage fees during the first three quarters of 2013. That’s a 470 per cent jump over the same period in 2007.

But use of carry-ons isn’t entirely driven by fee avoidance, says airline consultant Jay Sorensen. Part of it is convenience. “I think it’s a love of carry-on,” he says. Passengers want to avoid the wait at the luggage carousel and horror stories of lost bags have passengers keeping everything in close reach.

Solutions to the carry-on crush vary from risk to reward. The U.S. low-cost carrier Spirit enforces carry-on bag size with a substantial fee. “You are financially encouraged not to take large bags to the gate,” Sorensen says. “I’ve flown Spirit and I have never witnessed such a smooth boarding process.” Last year, American Airlines also tested letting passengers who don’t have carry-ons board first.

Then again, with no hulking carry-on to store, what’s the incentive to board early? Other than to watch everyone else struggle.