Mainly Because Of The Meat 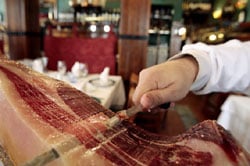 When Gwyneth Paltrow and celeb chef Mario Batali visited the region of Castilla y León on a recent episode of the PBS travel/foodie series “Spain…On the Road Again,” the non-red-meat-eating Paltrow titled her subsequent blog “What to Eat When Everyone’s Eating Jamon (Ham).”

“I don’t think it’s possible to live here and be vegetarian,” said Susana Rivera, our guide, on my first day in Spain, “at least in Castilla y León.” She’s right. Food is almost a religion in this region of rocky plains and mountains in the historic heart of central Spain. So it’s only natural that most of what you find on your plate is meat.

Locals wax lyrical about jamón Ibérico–the finest cured ham that comes from free-range pata negra (black-foot) Iberian pigs, who are fattened on a diet of acorns. The nuts give the meat a unique taste, also producing a fat infused with oleic acid, the same “healthy” fat found in olive oil.

At Restaurant Casino del Tormes in Salamanca, considered one of the most spectacular Renaissance cities in Europe, the leg of ham is presented bone-in on a specially designed stand, and then reverently hand-carved in paper-thin slices. “You must slice it fresh,” says Rivera firmly, “no more than five minutes before serving and the meat must be covered so the fat doesn’t dry out.” 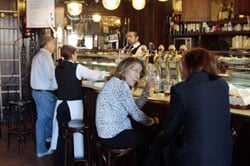 Equally worthy of worship is the Avila beef that comes from a special breed of cows raised on the high plains. I learned that when cattle don’t have to navigate hills, they aren’t muscle-bound and the meat is more tender. For Castilians, messing with a fine cut of meat by shaking on a whole lot of spices à la North America or—perish the thought—adding a sauce, is anathema to their approach to food. The proper way to eat Avila beef in all its sizzling deep-flavoured glory is simply with a shake of salt and dash of pepper.

Other foodie favourites in Castilla y León include roasts of suckling pig, lamb and goat and slow-cooked hearty stews. In fact, just about anything that walks on four legs is consumed with gusto.

That’s not to say that you can’t find a single veggie-based meal. The chickpea—long a staple of the peasant diet—is held in great esteem. It shows up in hearty soups and stews, albeit frequently with meat or at least meat broth. You might also dine on a traditional Spanish tortilla – not the flatbread, but rather a fluffy combination of potato, egg and a sprinkling of coarse salt, more akin to an Italian frittata.

Despite Castilla y León’s host of culinary delights, however, if you’re a diehard herbivore, you will likely have to search far and wide for sustenance. At one point, when I was craving for something in more of an emerald hue, I gestured to a salad on the menu. “What is this called?” I inquired. Our host thought for a moment. “We call it duck-ham salad.” Of course.