Colouring books for Christmas? Make sure to warm up!

For millions of adults, colouring books bring inner peace—but it can also bring tendonitis, back problems and worse 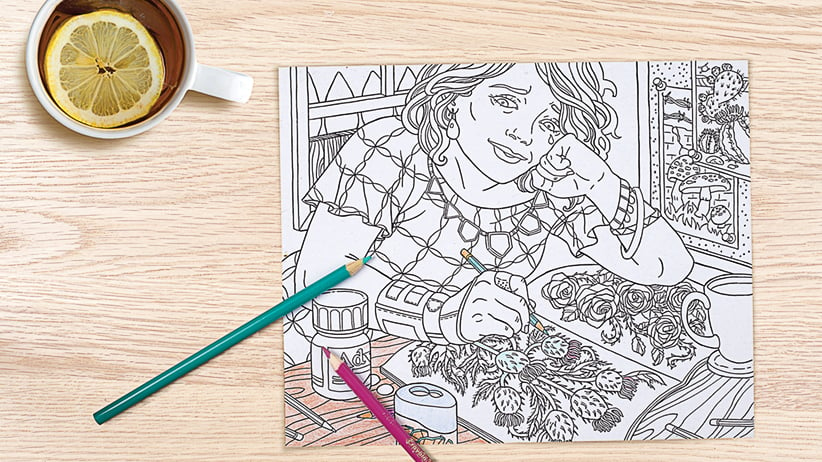 Before Sandi Jones begins colouring each evening, she takes at least one painkiller. Her warm-up exercises, recommended by her physiotherapist, include rotating her wrists, stretching her forearms and curling a small weight in her right hand, preparing her tendons for the work ahead. Jones straps an ice pack around her shoulder and heating pad to her back. Also on site at her colouring station: Voltaren Gel to reduce inflammation. She opens her colouring book and pinches a marker or pencil in her fist. Soon, like an athlete, she starts to feel the burn.

“It’s a radiating, burning pain that starts in my joints and shoots up through my arm,” says Jones, a 55-year-old living in Victoria. She has swelling in her colouring hand after clocking two hours a day, sometimes four, colouring intricate pictures, and pressing hard for a crisp look. She took up the activity in May, shortly after adult colouring books exploded in popularity across North America. Currently, four of the top 20 bestselling books on Amazon are colouring books, some having sold more than a million copies. The primary consumers are middle-aged and older women who find delight or tranquility in colouring between the lines.

But colouring is not for cowards. Three months since Jones began, the calluses on her fingers are just the surface symptoms of her devotion to her hobby. After she admitted to her family doctor she was colouring each evening until her hand went numb, the GP told her she must do hand and wrist exercises to prevent the onset of arthritis. “She certainly didn’t want me colouring at the kitchen table,” says Jones. “I was swelling up all over.” Jones switched to using a lap desk on her couch, which sits in her living room next to a trolley of colouring gear, and doing exercises to train her muscles. With her new work station and warm-up regime, she has quadrupled her colouring endurance. “I’ve gotten stronger,” she says. “I used to only manage one hour at a time.” Her doctor generally approves of colouring as a creative activity, but urges her to colour with caution. “I restrict myself to evenings only,” Jones explains. “But it’s very, very tempting.”

Bizarre as it may sound, Jones is not an outlier in suffering colouring-related injuries. Jackie Ducker, a colourer in Philadelphia, has lost sensation in her hand. “I haven’t felt my thumb in months,” she says. Emily Mei Reid, who lives in London, England, developed a repetitive strain injury after colouring intensely for three weeks to meet a deadline for her art class. She finished her project but was forced to withdraw from the class. “It can happen if people don’t pay attention to what their body is telling them,” she says. People with existing joint conditions feel their discomfort worsen. Dianne Cannizzo, who has lower back problems and carpal tunnel syndrome after years at a desk job, describes the effect of colouring. “The back starts barking after 30 minutes. I push it for another 20 to 30 minutes and by then the right hand is very painful and I know it’s time to lay down the pencils.”

The notion of people suffering for colouring shouldn’t be as surprising as it seems. We routinely injure our bodies and court pain to play amateur hockey, or basketball, even tennis. And while colouring ought to be less strenuous than those activities, most people today are not accustomed to holding a writing utensil for anything but scribbling a grocery list. “It’s like going from never running to running a marathon,” says Sabaa Aziz, a chiropractor at a medical clinic for artists in Toronto. Her clients include drawing artists who spend hours each day with pencils in their fists. They commonly develop carpal tunnel syndrome, arthritis and chronic pain. Amateur colourers who are addicted but not conditioned to the activity face even greater risk, Aziz notes. “I can guarantee they’re going to have issues,” she says. “They would actually exhibit worse symptoms than my patients because they’re not used to it.” 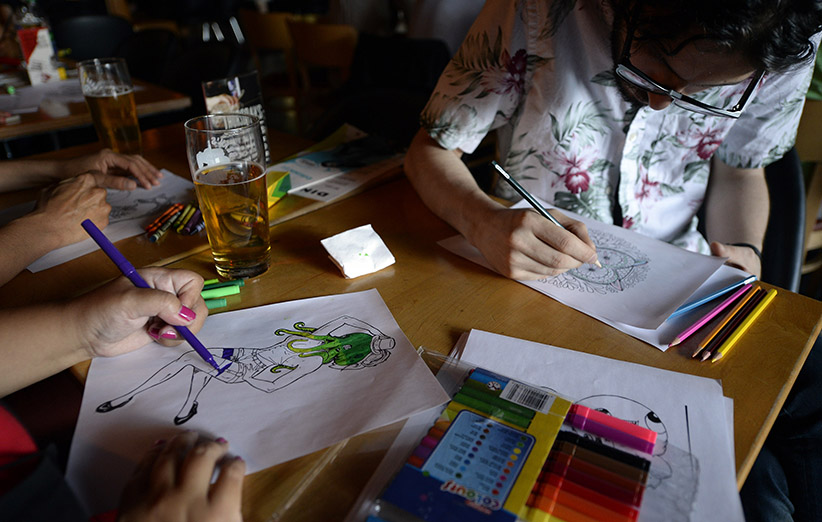 Ergonomically, intensive colouring can, in some cases, be worse than typing. Pinching a pencil involves less finger freedom, and pushing hard on a page demands more exertion from the hand muscles. “It creates more pressure through the palm,” says hand therapist Doug Fox, “especially if you’re colouring hard to get dark shades.” Unless hobbyists have custom tilted desks—which some do—they often end up leaning with their backs and bending with their necks. As for the colouring clubs that sometimes meet in parks or backyards—where they lay down blankets for picnic-like parties featuring clipboards instead of plates—the meet-ups are pleasurable, but also mean hours of contorted legs, tucked-in elbows and cranked necks.

Ironically, some people colour precisely to manage pain. Titles like Color Therapy: An Anti-Stress Coloring Book are popular among people with fibromyalgia, multiple sclerosis and other forms of chronic pain. Colourers also say the activity can help erase depression and anxiety, and books including Color Me Calm: 100 Coloring Templates for Meditation and Relaxation are written by registered art therapists, although some therapists distinguish colouring from art therapy. Richard Merritt, a contributing author of The Art Therapy Colouring Book, says customers have never complained to him of discomfort caused by colouring, although he has experienced hand cramps himself. “Taking breaks is essential, but I understand that it can become engrossing,” he says. In some cases, colouring may even verge on becoming spiritual; one artist is creating adult colouring pages with Bible verses written between the lines.

Colourers have become creative with solutions. Aside from fortifying their wrists with splints, braces and sports tape, some soak their hands in hot wax or Epsom salts. Annette Clyde, who colours for up to 10 hours a day, gets hand massages at a manicure salon and does exercises before and after colouring. “It helps extend colouring time by usually 25 per cent and helps me recover faster,” she says. Others place gel pads at the base of their colouring books, or wear therapeutic gloves to help with joint pain. Facebook group pages are full of tips from hobbyists who’ve adopted diets full of anti-inflammatory foods or swim regularly to build forearm strength. Colourers sometimes wrap narrow hair curlers around their pencils for a cushion grip, or store their pencils in the freezer so the graphite spreads more easily on the page. Tiger Balm, peanut oil, and hot water bottles are frequent saviours. “I lather my hands with [anti-inflammatory] gel every day,” says Jones. “Absolutely, absolutely every day.”

The market presents solutions, too. Faber-Castell, a German brand of art tools and stationery, sells pencils with “integrated cushion groups,” which are rows of rubbery dots to coat the wood, and triangular grips, which mimic the natural position of the hand. “The more strategically it sits in your hand, the more sustainable the colouring becomes,” says Michael Pons, who distributes Faber-Castell products in Canada. Pons’s sales of regular coloured pencils have increased from 300 per month last year to 4,000 per month since the spring, but sales of the ergonomic pencils are comparatively dull. “People don’t realize the impact of squeezing a piece of wood for a very long time,” he says. “Adult colouring is not a fly-by-night trend, so it could be a very long time indeed.”

Since pencils demand pressure on the page, many people switch to markers. “My preferred medium is Sharpies,” says Jones. She colours mandalas and medieval-style scenes, but she skips the pages with gardens. “I do none of that granny floral stuff,” she says. Jones colours simply for bliss. When she completes a page, she leaves it attached to the spine of the book and never looks back. “It’s mentally liberating,” she says. “Colouring has tapped into something we all need.” To her doctor’s amazement, colouring has also led Jones to drop eight pounds. “I get so engrossed in what I’m doing, I forget to eat.” She colours for hours each evening, then sleeps off the pain. She takes another round of painkillers before going to bed, but the activity, to her, is worth it. “I will not give up my colouring,” she says. “Oh, hell, no.”

Still want to give colouring a spin? Download and print the top image and colour it at home. Just make sure to warm up.