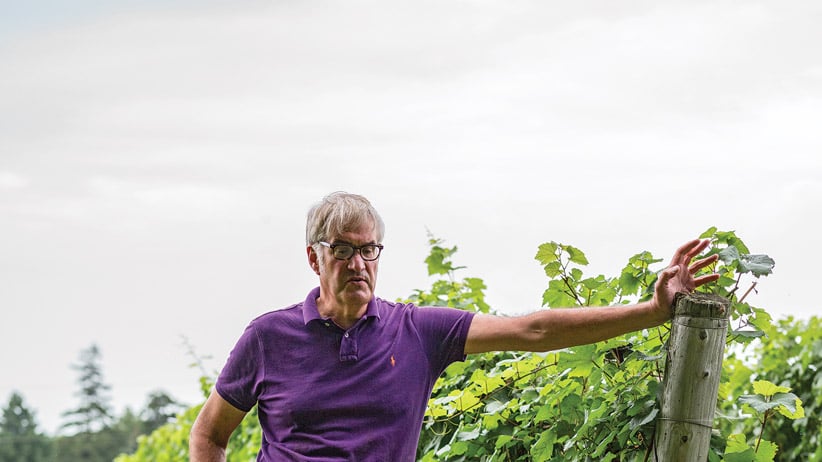 Thomas Bachelder is on a rescue mission, trying to save chardonnay from itself. “I want to make it sexy again,” proclaims the 55-year-old Niagara winemaker. “A tight, minerally, food-friendly wine.”

For too many North Americans, the great white grape has become synonymous with cheap Californian plonk: a sweet and heavily oaked default drink for summer barbecues and lazy cottage evenings. But it doesn’t need to be that way, Bachelder argues. Europeans know and embrace it as a far more challenging tipple: complex, acidic and refreshing.

It was a discovery Bachelder made for himself when he began studying and apprenticing in Burgundy in the early 1990s. A confirmed ABC—anything but chardonnay—drinker, he was astounded to find that a second, or even third, glass of the French version (also known as white burgundy) could be rich and rewarding instead of “sugary and disgusting.” It was a revelation that he always carried with him in his work in a winemaker for Lemelson Vineyards in Oregon and Le Clos Jordanne in Niagara. And, in 2009, when he and his wife, Mary Delaney, were casting about for a new challenge, it became the germ for an audacious experiment. Taking what they had learned about cool-climate viticulture, and using the classic Burgundy techniques, the couple set out to make the same wine in the three different places they had lived and worked, showcasing the nuances of both geology and geography. Renting production space and cellars in Oregon, Burgundy and at home, their virtual winery (Bachelder, a Montrealer, prefers the French term garagiste) started with chardonnays and has since moved into pinot noirs. And the pair has branched out to single-vineyard editions, as well, revelling in even subtler differences. “Having started in France, I was indoctrinated in the terroir mindset,” Bachelder explains, “and the great surprise of my career was discovering that those changes in drainage or elevation that make certain parts of a vineyard special exist in the U.S. and Canada, too.”

The grapes he sources are all organically—and sometimes biodynamically—grown. Fermented with wild yeast, his wines are made with minimal intervention, then aged in mostly older, and lightly toasted, oak barrels. “The ultimate expression for any wine is the place from where it comes,” says Bachelder, “not how much wood you put in it.” His chardonnay from Oregon (where the only whites once produced from the sandy and volcanic soil were pinot gris) is dense and fruity and carries the slight tang of the sea, says Bachelder. The French version, from the classic limestone slopes, he describes as refined and textured. But he takes even greater pride in the Niagara white that he terms as a perfect mid-Atlantic fusion. “It’s got New World fruit with an Old World mouth and acidity,” he says. “I think it can stand up to the rest of the world.”

The trilateral experiment has been a demanding one. Between his winemaking and marketing responsibilities, Bachelder is generally away from his home in Fenwick, Ont., and his wife and two teenage daughters, for close to four months each year. But he feels it’s starting to pay off in a growing awareness among opinion-makers and consumers. The annual International Cool Climate Chardonnay Celebration, which started off as a party around a campfire in his backyard, has grown into a truly global affair, attracting producers to Vineland, Ont., each summer from France, Italy, Spain, South Africa, the U.S. and Canada. It all inspires hope that his favourite white might finally be on the road to rehabilitation. “People had lost sight of what chardonnay could be,” says Bachelder. “We just want to make people drink a little less Yellow Tail.”