From the Maclean’s archives: Anne Kingston on Au Pied de Cochon from February 12, 2007 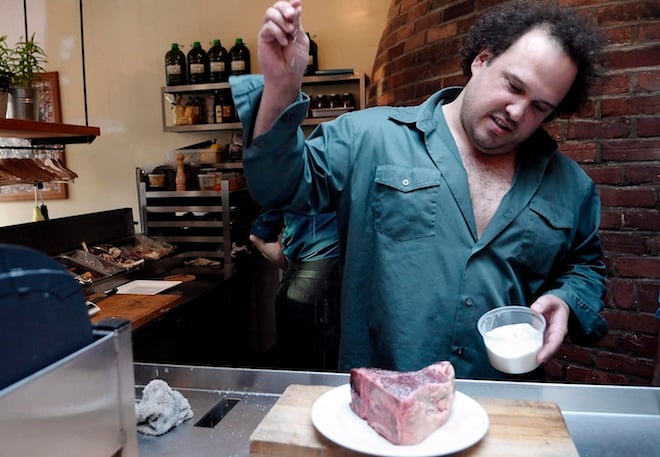 Martin Picard, the wild man of Quebecois cuisine, used to be an insider’s secret. In culinary circles the 40-year-old chef is known as a Rabelaisian enfant terrible — passionate, profane, a proponent of sourcing local, seasonal, natural ingredients, and an outspoken critic of all that is processed, factory-farmed and banal. Diners pack his Montreal brasserie Au Pied de Cochon six nights a week for Picard’s renditions of sugar-shack classics: pig’s feet, venison tongue in tarragon sauce, tourtiere, pea soup, oreilles de crisse, pouding chomeur and his signature foie-gras-topped poutine, a wicked invention now on the menus of famous pretty-boy chefs inToronto and Vancouver without attribution.

His fame is spreading. Last year, Gourmet ran a mash note to the restaurant written by Anthony Bourdain, the chef, author and fellow wild man. “Chefs told me ‘You have to go to this restaurant. You’re going to love this guy,’ “says Bourdain, who calls Au Pied de Cochon “the restaurant I’d been waitingfor my whole life.” The first time he visited, he recalls, Picard instructed a chef to “Kill him.” “And he nearly did.” The brilliantly gonzo self-published Au Pied de Cochon — The Album, published last October, became the year’s unexpected cookbook sensation. The New York Times called it “a publishing phenomenon.” A documentary about Picard is in the works. He was the only Canadian selected to appear with 50 chefs, among them Ferran Adria, Jamie Oliver, Gordon Ramsay, Alain Ducasse and Mario Batali, in photographer Melanie Dunea’s book The Last Supper, due out later this year.

In an age of nervous food sanctimony and celebrity-chef endorsement, Picard,with his five-day stubble, black-eyed intensity and untrammelled appetite, provides welcome relief. Next to him, the carnivorous Batali looks like a pussy. Picard merrily sends up his bon vivant reputation in the cookbook, posing in one photograph naked save for a strategically placed sash, chugging from a bottle of wine in a bacchanal tableau with TV host Gaston L’Heureux,who’s attired in a red boa. “Everything is abundant with Martin — food, wine, work, everything,” says the Montreal chef Normand Laprise. Bourdain agrees: “For him, too much is never enough.”

Like the British chef Fergus Henderson and Batali, Picard embraces the”snout-to-tail” approach to cooking, wherein no animal part is too humble to eat. He rejects the preciosity of tasting menus on which duck is presented”three ways” and ingredients are reduced to foam, air and gel abstractions.”I want people to see the reality of food,” he says, sitting in his restaurant on a January afternoon as his staff readies for the night. His Gallic comfort food is primal, harking back to a time before industrial farming, before naturally grown food was sold at a premium. Plainly put, Au Pied de Cochon is vegan hell. “Heart-smart” and faint-hearted diners, too, should take a pass: the second instruction in Picard’s recipe for beans and meatballs reads, “Using a saw, cut the top of the piglet skulls to remove the brains.”

Born in Repentigny, Que., Picard attended the Institut de tourisme etd’hotellerie du Quebec before taking a job at Montreal’s fashionable Citrus, run by Laprise, who fostered artisanal food production in Quebec. When Laprise opened the nouvelle cuisine shrine Toque! in 1993, Picard was his sous-chef. He left to travel and cook in France and Italy, brieflyconsidering opening a restaurant in France before returning. “I realized I had my roots here,” he says. After a stint as chef at Le Club des Pins, he opened Au Pied de Cochon in 2001 in the Plateau neighbourhood.

Picard detests the uniformity of most high-end cuisine: “It’s all the same: a square plate with three things on it.” He praises the Spanish culinary wizard Ferran Adria of El Bulli for his originality and conviction, if not is food. “El Bulli is good for gastronomy,” he says. “They’ve done something new with taste. But you end up eating 25 small courses. Come on, you smell the orange air and go ‘Ah, ah, ah.’ ” He rolls his eyes. “It’s very intellectual.”

Picard’s approach is visceral: to honour, not disguise, what is being eaten; a clear line exists from the barnyard, the forest, the garden. In the cookbook he’s pictured with a freshly gutted deer, his hands bloody. “I have no qualms about hunting in today’s world,” he writes, noting, “When I go out hunting, I feel I must respect the animal I am killing.” At his annual “hunter’s banquet,” the table is laden with moose tongue, moose heart, woodcock and pigeon presented crucified on a tiny cross.

Picard revels in the playful pairing of high and low. His deep-fried foie gras cromesquis releases a Bubblicious gush of foie-gras fat when bitten. His whimsical $36 “Duck in a can” is half a mallard duck, foie gras, garlic and balsamic demi-glaze, canned, cooked, then ceremoniously opened at the table and dumped over bread and celeriac puree. He’ll do fast-food fare but with top-notch ingredients. “It’s my pop art,” he shrugs. “It’s not going to change the world.”

Bourdain calls Au Pied de Cochon “review-proof.” “Either you get it or you don’t,” he says. “It’s the antithesis of the hot restaurant. [Picard] couldn’t care less if the beautiful people come. He holds all of the superfluous nonsense of restaurants in contempt. He respects craftsmanship but he’s not a guy who stacks food. Knowingly or unconsciously he’s raising a middle finger to all of that. He’ll present a pig’s head in maple syrup with gold flake on the nose. “It’s a real screw-you.”

He ranks Picard “one of five or six classic figures in culinary history dating back to Roman times,” observing that “a common denominator of great chefs — be it Ferran Adria or Thomas Keller — is the food reflects the place they’re cooking, the culture they’re coming from and also a wider worldview.” That world view is aired in Au Pied de Cochon — the Album. Part manifesto, part scrapbook, part recipe collection wittily illustrated and designed by Pied de Cochon waiter Tom Tassel, the album is a collaborative effort that pays homage to staff, suppliers, mentors and the restaurant’s zany spirit. It’s now in its third printing, having sold 15,000 copies in French and 2,000 in English. “It flew off the shelf,” says Allison Fryer, the manager of Toronto’s Cookbook Store. “It was all word of mouth.” Orders have poured in from chefs in London and the U.S. “It’s a very ballsy thing to do,”says Bourdain, who wrote the introduction to the English translation. (The French version begins with a 48-page graphic novel about the “history of pork”; its humour was deemed “too Quebecois” to withstand translation.) “No sane publisher would have given him money, but now they’re all kicking down the door and we’ll see pale imitations.” Included is a DVD showing Picard trying out new recipes, setting out on a comic, quixotic journey in search of poutine’s origins, and visiting suppliers to commune with the produce. At the Ardennes pork farm where pigs are spared the cramped, filthy conditions of corporate production, he cuddles a pig and coos: “Do you want to know how I’m going to cook you?” In Picard’s view, ethically raised animals make for a tastier dinner. He eschews beef and chicken unless he can vouch for the producers, preferring the gamier taste of venison farmed on a ranch outside Montebello.

As for the fuss over the force-feeding of ducks for foie gras, an Au Pied de Cochon staple, Picard has little patience. “It’s very stupid,” he says. “They photographed some duck who was force-fed improperly. But if you think about it, it’s just an animal; it’s just a duck. We’re now killing people all over the f—ing world for religion and now we have people dying for a duck. “Priorities are skewed, says the father of two. “A lot of kids are so fat they can’t move because they are eating that f—ing fast food. People should care about the kids and not the ducks because we’re treating the ducks very well.”The degradation of food quality inflames him. “We’re working like assholes,” he says. “Everything fast, fast, fast and we’re eating very badly. We want to save money, we want convenience, and we lose everything.”

Lack of respect for culinary tradition is another sore point. “We have a government that doesn’t care about food,” he says. “They just say ‘Eat five vegetables a day.’ That’s so stupid.” He believes the government should support the restaurant industry as they do in France and Spain. “You think at El Bulli those guys are paying for everything?” he asks. His next project, one that could take a decade, is to create a Quebecois ham on par with that of France’s Bayonne. He’s recently returned from southern Spain, where he observed the production of pata negra, the nutty, marbled meat regarded as the holy grail of pork. “Martin is a big dreamer,” observes Laprise, who says Picard approached him for assistance in setting up a sugar shack to make maple ham. “I’m not quite ready for that but I want to help him. I love Martin because he’s so intense.”

Of his new celebrity, Picard is unfazed. Don’t expect a Martin Picard line of butcher knives anytime soon. “I have a problem saying ‘no’ but I’m learning,” he says. “I have priorities. Maybe they’re not the ones people want me to have but they’re mine.” He shrugs. The suggestion that success could change Picard makes Bourdain laugh. “I would be shocked,” he says, “if he changes his T-shirt.”