Bookish and bright, he had read the Quran by age four. As a doctor,he ignored risks to help those in the city where he was born. 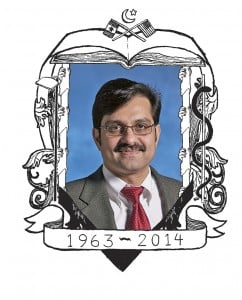 Mehdi Ali Qamar was born on Sept. 23, 1963, in Rabwah, a city in Pakistan’s Punjab region. He was the youngest of seven children born to Najum Un Nisa, a housewife, and Farzand Ali Chaudhary, a farmer; Farzand had six children from a previous marriage. His father owned rich land that produced wheat, rice, sugar cane and cotton. “We were fortunate,” says Samina, Mehdi’s older sister. In hard times the Chaudharys took people into their home. Farzand opened a herbalist clinic for the needy and the family also handed out their fresh milk and yogourt. “Our parents, they always said, ‘You must do productive things. Do something good,’ ” recalls Samina.

The family was religious, members of the Ahmadi sect—a minority group within the Islamic faith. Mehdi would join his father at the mosque before dawn, and when it was time for prayers, he would rush around the house to notify everyone. “My parents would baby him,” recalls Samina, with a laugh. In fact the last name he adopted, Qamar, was initially a pet name from his mother that means “my moon.”

Mehdi was gentle and bookish. While the Chaudharys were strict about all their children studying hard, Mehdi stood out: By the age of four, he had finished the whole Quran; not long after, he started reading the newspaper before school and engaging his father in conversations about current affairs. One of Mehdi’s other pursuits was cricket; he would steal away to watch tournaments on television and he played, too, although at “not a very good level,” jokes Hadi, his older brother. He also took up painting and poetry, two pastimes shared by some of his siblings. “He was the best of us,” Hadi said.

Najum Un Nisa had long wanted one of her children to become a doctor and when she asked Mehdi, who had earned top marks at every level of school, he agreed. He took to it early; as a teenager, he and two friends realized Rabwah did not have a blood bank. So they raised funds to start one, which still stands today. He eventually enrolled in Punjab Medical College in Faisalabad, graduating in 1988 near the top of his class. In 1991—the same year their father passed away after a year-long illness—his older brother, Asharaf, moved to Toronto. The year after that, Asharaf sponsored Mehdi and their mother to join him, and Mehdi became a Canadian citizen. While in Pakistan, he had entered into an arranged marriage with Wajiha Khan, the daughter of a family friend. She soon joined him in Canada.

While in the process of choosing a specialty for his medical degree, Mehdi’s mother died suddenly of a heart attack in 1994. “He felt helpless,” says Samina. He decided to specialize in cardiology, and he and Wajiha moved to New York City to complete his residency before settling down in Columbus, Ohio, to raise three sons: Abdullah, Hashim and Ashar.

“He was soft-spoken, but patients would always trust him,” says Richard Bardales, who worked with Mehdi at Ohio’s Fairﬁeld Medical Center. Despite long hours at work, Mehdi was a devoted family man. Bardales remembers paintings that Mehdi had made of his family hanging in his office, including an oil portrait of his father. He was active in the community, helping to found a cardiovascular institute and donating to help build a mosque in Columbus. Last year, he used his vacation time to return to Rabwah and volunteer at the Tahir Heart Institute, a clinic offering affordable health care.

In May, as Mehdi prepared for another trip to Tahir, friends and family tried to talk him out of going. In recent decades, many Ahmadis have fled due to persecution— in Pakistan they cannot call themselves Muslims and cannot refer to their prayer halls as mosques. But he insisted it was safe. Before he left, he told his family he was planning to move them back to Toronto—it had become home base for the Chaudharys, with three more of his brothers joining Asharaf there.

On May 26, two days after arriving in Pakistan, Mehdi took Wajiha and his youngest son, two-year-old Ashar, to the early morning prayers he had so looked forward to as a child, before heading to a cemetery to pay respects to his parents. Two people on a motorbike approached Mehdi and—because it is suspected they knew he was an Ahmadi from America, thus making him a high-profile target—they fired at least 10 bullets into his body in front of his wife and Ashar, who were unharmed in the attack. He was 50.