At age three, she started riding horses and never looked back. ‘She was poetry on a horse.’ 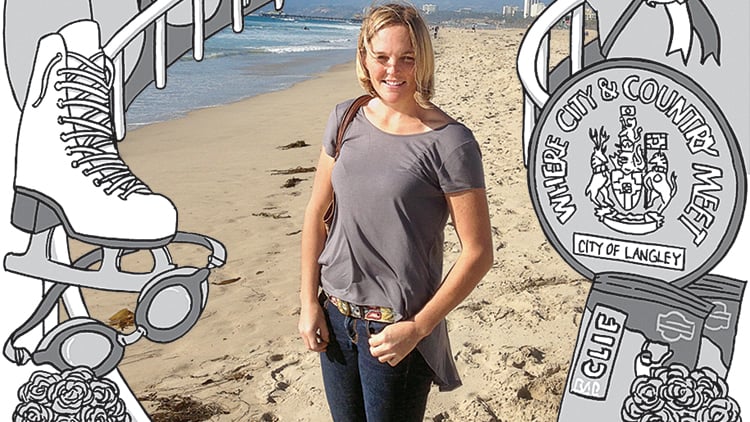 Melanie Ann Walters was born in Vancouver on May 28, 1976, to Ken Walters, a dentist, and Maralee Rutley, a figure skating teacher and stay-at-home mom. She had an older brother, Kenneth.

Her family lived on an acre-and-a-half property across the street from the Southlands Riding Club in Vancouver. At age three, Melanie got a pony named Flicka. From the instant she got on, she wanted to ride. Before long, Melanie was entering small horse shows and worked her way up with Flicka to jumping. “From there, she just went up the ladder,” Ken says. She was a naturally gifted rider, and soon competed as a show jumper in competitions across the continent.

In her final year of elementary school, Melanie learned of a high school that offered a sports program that would allow her to start classes earlier in the day and finish around 12:30—leaving more time for riding. She asked her parents if she could attend, and they agreed. “We knew she had talent,” says Ken. “I said, ‘Sure, as long as you get your homework done.’ ”

After graduating in 1993, it was a competition in Harrisburg, Penn., that made her a name in the show-jumping world. She won the prestigious Hunter Seat Equitation Medal riding a horse called New Generation. From there, at just 18, she went on to win the Canadian Equestrian Team Finals in 1994 at the Royal Agricultural Winter Fair in Toronto and placed second in the Maclay Medal standings in New York—a competition her father refers to as “the Super Bowl.” Never one to let her ego get in the way, Melanie would congratulate her competitors after every race with a big smile.

Melanie rode, trained and worked in California and Vermont before deciding to return home and only compete in smaller, local shows. “Once you get to the elite level, you have to have two or three top-tier horses to compete on a national scale,” Ken says. “It’s a different ball game.” She started her own business, Showcase Farms, offering lessons and training show horses. Her reputation as a top show jumper brought students from all over the province to her stable. “She was poetry on a horse,” says her friend and former pupil Danielle Clark, recalling her ability to ride unbroken horses. “She just spoke the horses’ language. They trusted her. When they didn’t like other riders, they liked Melanie.”

She worked tirelessly on the Langley farm, rising with the sun and was happiest putting in 10- to 12-hour days in the barn. She also met Jim Ellickson, a horse trainer, and dated him for several years before they married and had two children, Laurel in 2005 and Caden in 2007. They separated shortly after Caden’s birth.

Two years ago, Ken, himself an avid horseman and owner of many successful racehorses, encouraged Melanie to pursue her licence to train race horses—a certification required by racetracks. When she first expressed an interest in training his thoroughbreds, Ken teased her, asking if she was certain she understood the time commitment involved. Her first season, in 2012, proved she did; her horses won 15 of her 64 races. Her biggest client was her father. “We would walk the horses after we rode them and she would say, ‘Dad, you walk the easy ones. I don’t want you to get hurt,’ ” Ken says.

While she enjoyed attending concerts with riding friends, seeing bands such as Mumford & Sons and the Dixie Chicks, she most cherished time with Laurel and Caden, swimming, skating, or at the racetrack, where they’d watch the horses and their riders flying down the track. A year and a half ago, Melanie attended a barbecue with her kids. There, a handsome exercise rider from Vancouver’s Hastings racecourse, Cenek Kottnauer, caught her attention when he drew Laurel a picture. On the pair’s first date, they went to a vegetarian restaurant, a departure for meat-eating Melanie and, before long, she was extolling the virtues of Clif bars to her friends. The pair moved in together, living in a double-wide trailer on her parents’ farm in Langley. Later, he drew a mural on the wall at the racetrack of Melanie riding a horse.

On Feb. 13, Melanie went to her parents’ arena with Ken to work 10 of his horses because the racetrack was frozen. After tiring out nine of them, she started on the last one, a two-year-old. She fell off, and the horse stepped on her stomach. Melanie was rushed to the Royal Columbian Hospital but died later in surgery. She was 37.