As a boy, he built his own outdoor rink to play hockey. A career minor leaguer, he was called up to join the Leafs’ 1967 Stanley Cup run. 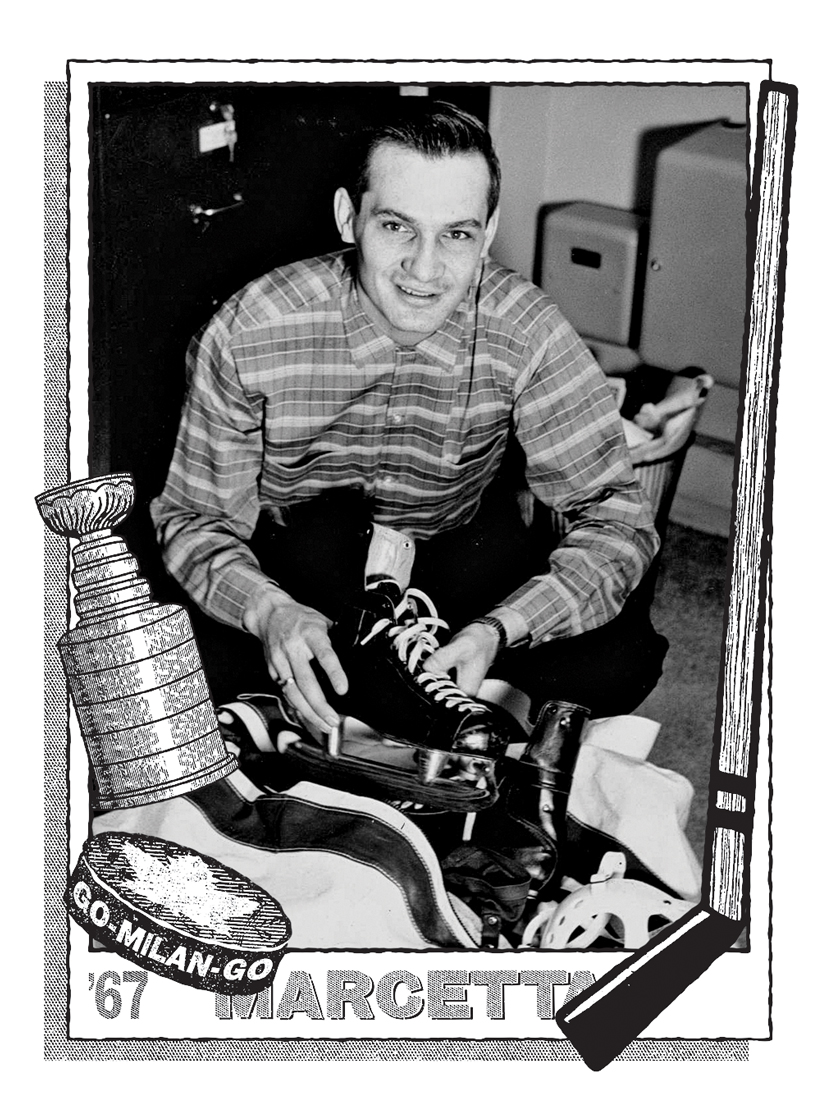 Milan Marcetta was born Sept. 19, 1936, in the coal-mining town of Cadomin, Alta. His father, Mile, met his mother, Perka, after immigrating to Minnesota from Bosnia to work in a mine.

Living in a tiny two-room house that Mile built, the couple had four boys, starting with Pete in 1934, then Nick, Milan and Marko. Life was tough along Alberta’s coal branch. During the Depression Milan’s father found only part-time mine work. His mother washed clothes in the river. Winters were harsh, but Cadomin had a covered ice rink where kids played hard-knocks hockey. As a boy, Milan quickly distinguished himself on the ice. He built his own rink alongside the family house to practise as much as possible, even in -30° C weather.

His skills got noticed further afield. In 1953, at 17, Milan left home to join the Medicine Hat Tigers. At the time “Wild Bill” Hunter, who later founded the Western Hockey League, called Milan the best junior prospect in Canada. A six-foot-one, 195-lb. centreman, Milan was a natural goal-scorer and a magical stick-handler.

In 1959 Milan was playing for the Sault Ste. Marie Thunderbirds when a trainer introduced him to Arlene Menard after a game. She worked for the local telephone company. “I thought he was quite good looking, but he was very quiet,” Arlene says. “It took a while to build up a relationship.” They dated for two years, during which Milan went back each summer to Cadomin to drive trucks at the mine. The couple married in Sault Ste. Marie on April 29, 1961.

Milan and Arlene had two boys, Michael in 1960 and Milan Jr. in 1964. Milan loved family road trips in their Winnebago. They once drove from Alaska to Louisiana and back up to Victoria, a five-month journey. But Milan never enjoyed the constant moving his family endured as he was traded from team to team—13 minor league teams in all, in places such as Victoria, Buffalo, Denver and Memphis. The family stuck tightly together. “We just coped,” says Arlene. “And our children had to cope when it came to going to school. But they managed fine.”

Christmases were hectic but fun. “A lot of Christmases we had the single players over,” remembers Michael. “We’d open our parents’ presents in the morning. Then the guys would come over for dinner and bring us presents too.”

The highlight of Milan’s career came in 1967 when he was playing for the WHL’s Victoria Maple Leafs. The Toronto Maple Leafs’ legendary general manager Punch Imlach unexpectedly called up Milan and teammate Autry Erickson to help Toronto during the Stanley Cup playoffs that year. Milan debuted in the NHL on April 11, during the quarter-finals against the Chicago Blackhawks. He skated in two more playoff games, including in the final victorious series against Montreal. (It was the last time Toronto won a Stanley Cup.)

Milan was quickly flown back to Victoria, even before the victory parade and before getting to see his name on the Cup. Soon after, he was picked up by the newly created Minnesota North Stars. He played in a total of 54 NHL games and scored 22 points. After retiring from play in 1973, the family moved to Anchorage, where Milan ran a hockey school for several years.

At the end of the ’70s the family sold their Victoria home, planning to fulfill Milan’s dream of buying and operating an RV park in California. They waited in Seattle five months for the necessary green card, but it never came. So Milan moved his family back to Richmond, B.C., where he managed apartment buildings. He later did the same in Coquitlam, B.C., until declining health forced him and Arlene to move to Enderby, B.C., in 2003 to be closer to Michael and his three sons.

Milan had smoked from age 12. Over the past 15 years he suffered from chronic obstructive pulmonary disease. He also battled prostate and bladder cancer. He was too sick in 2007 to attend the Leafs’ 40th anniversary reunion of the famous 1967 championship. One joy during his illness was getting fan mail, which still came monthly. “That really made him feel good to know that people still thought about him,” says Arlene.

Milan died of complications from cancer surgery in Vernon, B.C., on Sept. 18, one day before his 78th birthday. He never did get to see his name on the Stanley Cup. But he wasn’t bitter, says Michael. “He always told us; ‘I had the best life. I had the best childhood. I played a game I loved.’ ”