This pub-style restaurant brings an unadulterated English vision to Toronto

Every time I read a review of this new tribute to contemporary English cuisine I feel bad for chef Ben Heaton and his business partner, Richard Reyes. Not because of the assessments, which thus far have all been positive, but rather because critics are apparently incapable of touching the subject of new British cookery without first writing disparagingly at length about overcooked roast beef and grey lamb with mint sauce, ho ho ho.

A more salient fact is that it has already been a quarter of a century since the London chef Marco Pierre White became the youngest ever to earn a Michelin star—and that was back in the era before they were given out like Halloween candy. That signalled a culinary revolution that helped make London a better dining city than Paris.

Heaton is far from our first chef to try to transplant something of that culinary vision. In Vancouver, David Hawksworth owes some of his skill set to his former bosses White and Raymond Blanc. Toronto chefs like Michael Bonacini and David Lee learned under Anton Mosimann. As did Marc Thuet—who also did some time with Pierre Koffmann, who, long before anyone had heard of “nose-to-tail eating” or Fergus Henderson, was putting offcuts like pig’s trotters on the menu at his three-Michelin-starred Chelsea restaurant La Tante Claire. On the casual end of things, Montreal chef Derek Dammann learned a lot from Jamie Oliver. 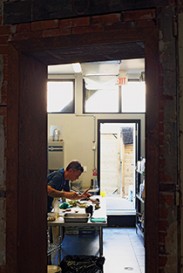 But Heaton stands apart from the rest of them in that he seeks to transport that English vision unadulterated. Settle in at the long bar at his pub-style Toronto restaurant, and the first thing that may catch your eye on the menu is the “Quo Vadis” eel sandwich. It did mine, anyway—Quo Vadis being a celebrated Soho pub that once belonged to Marco Pierre White and now thrives under the new ownership of Sam and Eddie Hart (and upstairs, where Karl Marx once shacked up, is home to my favourite private club). At Quo Vadis, the eel sandwich costs £7.50 ($11.70). Heaton’s is a relative steal at $8–and it is a most excellent bar snack, stuffed with more slender eel, but possessive of the same smokiness offset by the same horseradish.

But the Grove is about a lot more than bar snacks: Heaton is the well-trained product of many a fine kitchen, serving most recently as Mark McEwan’s executive chef at One. Somewhere along the journey he acquired a lovely light touch with fish, which he serves in colourful and unusually pretty compositions. The room is casual and fun, the influences are right, and the concept fresh. It is so much more enjoyable and interesting than the predictable Italian rooms that keep opening of late that, despite its short menu and casual setting, what it does right it does so well that it is the best new restaurant of the year.