A wild child, he left school in Grade 6. He worked with Stampede Wrestling (‘Mr. X’ in the ring), and later as a bus driver. 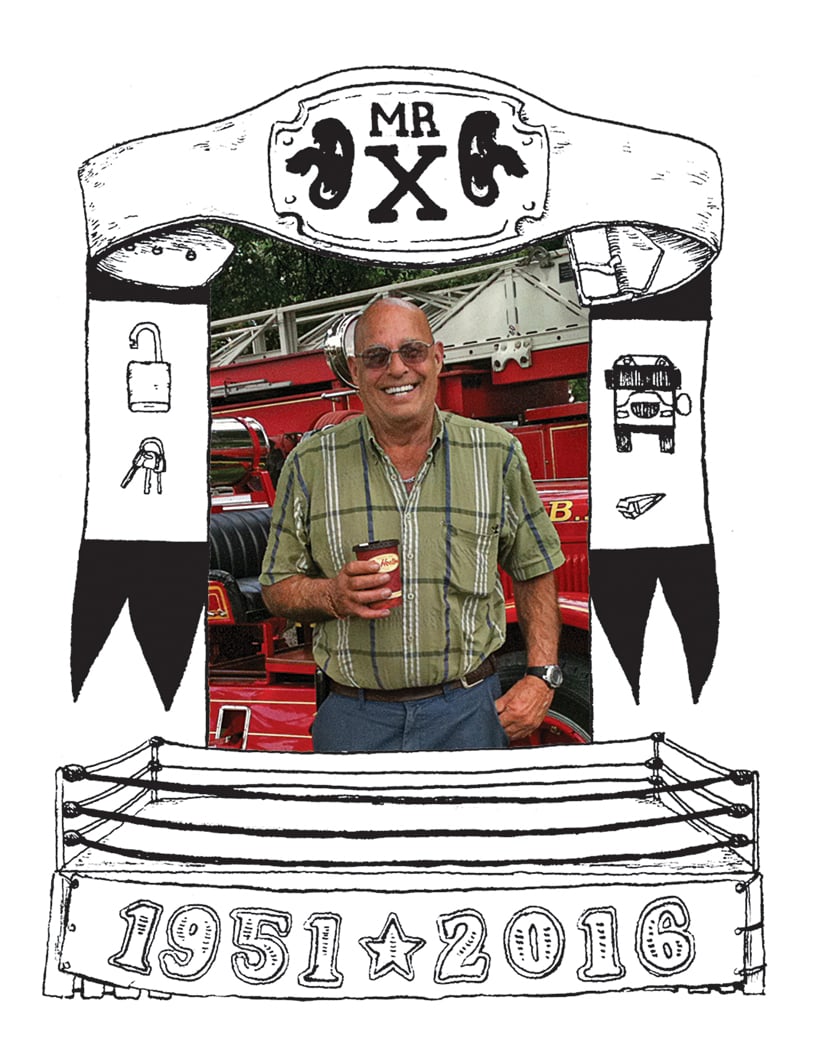 Norman James Kenney was born in Calgary on Jan. 26, 1951, to Doris, a homemaker, and Benjamin, a maintenance supervisor at Western Co-Operative Fertilizers. Norm had an older brother, Charles, who was raised by his paternal grandparents, and a sister, Pat.

Norm was very athletic. He taught Pat how to ride a bicycle, even though he was two years younger. He was also mischievous. He starting smoking at 10, trying impress some older kids. In Grade 6, teachers advised his parents to pull Norm from school. “They said that he was not interested in it and he didn’t pay attention,” says Pat. Norm began doing odd jobs; he walked dogs, had a paper route and worked at a car wash. “He was always on the go,” recalls Pat. “If he lost a job, he was out the next day, looking for something.”

In the late ’60s, Norm started working as an usher for Stampede Wrestling, under the direction of Stu Hart. Stu noticed Norm’s knack for fixing anything and the two became friends. Norm was moved up, working as a promoter, a driver and a referee. Sometimes, Norm would don a mask and jump into the ring as “Mr. X.” While refereeing a match Norm got a chunk of hair ripped out. He never liked his dark, curly hair, anyway, and shaved his head after that.

The wrestling gig was only part-time. Norm also worked cleaning out fertilizer bins at Western Co-Op, did rooﬁng and was a nightclub bouncer.

Norm met Mary Lou Brown, a nurse, and they married in 1973. They moved to West Kelowna and had a son, Christopher, in 1979. Norm continued with Stampede Wrestling, travelling around B.C. for shows. They would open their home to whomever needed a place to stay. Mary Lou would provide meals and help the wrestlers mend their costumes. For two months, King Kong Bundy slept in the Kenneys’ basement playroom.

For many years, Norm hauled the wrestling ring around hitched to his GMC van, which was custom painted, half baby blue and half light pink, with a trailer to match. Norm also worked as a locksmith. The van doubled as his mobile shop. He built the back suspension up to carry the weight from his trailer and tools. His pockets, too, were always heavily loaded: two or three wallets (one just for receipts and notes), a pocket knife, nail clippers, toothpicks and dozens of keys. “He went though quite a few belts, just from the weight of his pants,” says Norm’s son, who goes by the name Kray.

By the ’90s, Stampede Wrestling’s heyday was over. Norm started working for the school division as a custodian, and then as a bus driver assigned to Westside Road—a twisting route above Okanagan Lake. One winter day, Norm was on his way to pick up kids, when he encountered another truck whipping around a tight turn. It was icy and Norm’s bus careened over the cliff, only stopping when it hit a tree. “If a less experienced driver were driving, he probably would have gone over the edge,” says Mary Lou. Norm took pride in his job. He would decorate the bus with lights at Christmas and wax the floors.

Norm’s marriage with Mary Lou ended in 1998. He remarried in 2000; this marriage lasted seven years. All the while, he continued driving Westside Road. In 2007, Norm met his new boss, Sue Doucet. “Come on my bus route,” Norm told her. She went for a ride-along and the two hit it off. They tried to hide their romance, but it didn’t work. Sue quit her job after less than a year to be with Norm.

A year later, Norm was getting a bus headlight fixed when he had a stroke. It didn’t leave much physical damage, but affected his short-term memory and ended his bus-driving career. Norm was devastated. He filled the hours by tinkering, doing locksmith jobs and setting up “Wanda’s Bar” in his garage, giving his friends a place to share a beer. He also took great pleasure in playing with Sue’s grandchildren.

In 2013, Norm started complaining about not being able to catch his breath. Doctors initially wrote it off as related to his pack-a-day smoking habit, something he had tried to quit three times before. But a chest X-ray showed asbestos scarring, probably from working in fertilizer bins, or roofing. Norm’s health deteriorated. When he couldn’t manage the stairs in his own home, he moved into Sue’s condo. Norm died on Feb. 6 with Sue, his sister and his niece, Sandy, by his side. He was 65.