Even before Caitlyn Jenner, there was Quebec teen Olie Pullen

Maclean's catches up with Olie Pullen, who shared her story of gender variance in January 2014, and discussed Caitlyn Jenner's Vanity Fair cover 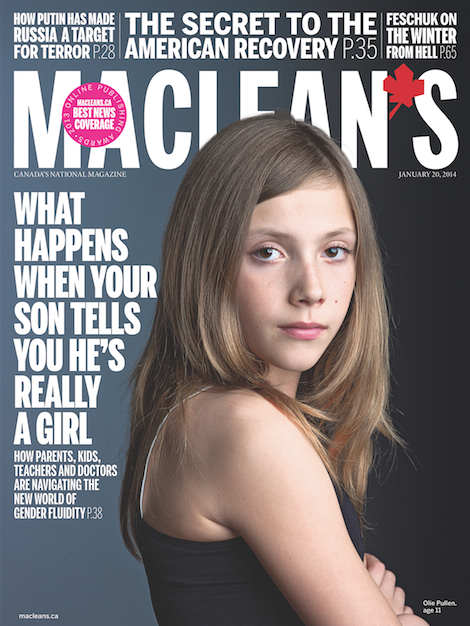 Before Caitlyn, there was Olie.

In January 2014, then-11-year-old Olie Pullen appeared on the cover of Maclean’s for a story—Cathy Gulli’s “What happens when your son tells you he’s really a girl”—that explored the lives of families embracing the new world of gender variance.

In the year-and-a-half since, trans rights have increasingly entered the public consciousness. Vancouver decided to enforce gender-neutral washrooms in public buildings. Laverne Cox soared to success on Orange Is the New Black. Ontario politicians voted to become the first province to ban “conversion therapy” by passing Bill 77 last week.

Maclean’s spoke with Pullen and her mother, Annie Pullen Sansfaçon, about what’s changed for trans people since the Maclean’s cover story—and why “Call me Caitlyn” is just a start.

Q: What sorts of reactions did you receive after the original Maclean’s cover story was published?

Olie: People said congratulations. They thought it was very brave to be able to put myself out in the world rather than in the shade or background. People were really supportive, and I had a lot of good comments.

Q: Since then, your family has helped found GenderCreativeKids, an online resource for young trans people and other gender-non-conforming children.

Olie: It’s important that people feel good in their bodies, not ashamed. We made it so that people can express themselves and meet other children, so that they get to know how other people’s lives go and see that they’re not the only ones . . . I get to know new people. It’s fun to see new faces. Some people struggle more and others are already [comfortable].

Annie: These are big issues to experience, when you’re a kid. It’s probably fun to be just kids and not wonder about what people think.

Q: How else have you stayed involved with trans advocacy?

Olie: We went to the Parliament. We were trying to get [the way sex is disclosed on] identity cards changed for young children, so they don’t have to encounter confusion when they change schools or go on trips. There are delays and people get sad and it ruins the whole thing.

Related: Laverne Cox on a ‘revolutionary moment’ for trans people

Annie: In Ontario [and other provinces], there is a law that allows young people and children to change their sex designation on their birth certificate. In Quebec, we don’t have that yet. We have been working really hard to follow Ontario. Olie has been to the National Assembly and had the chance to speak with the minister of justice and explain [the issue].

Q: What sorts of legal obstacles are preventing that change?

Annie: Let’s just say it’s not going fast. We’ve been trying to work with the government to get the law changed, and we also launched a human-rights complaint just under 18 months ago. That’s been proceeding; we still don’t know what’s going on with that. Until we can get that law changed, young people won’t be fully able to enjoy society. They face issues every time they pull out an ID card. Life chances are totally destroyed by not passing this. People can’t flourish. The other thing, I think, is that we shouldn’t need a sex marker on [pieces of identification]. Before, you had religion on that, you had race on that. Then we realized it was highly discriminatory. Maybe the next step is to have a collective reflection as to whether we should indeed have sex markers on a birth certificate or not. A lot of sexual minorities are really forgotten in that . . . We really need to educate people about the challenges of living as a trans person in this very transphobic society. Legal change is a first step, but we really need to move on to social change.

Q: Over the past couple of years, trans people have been increasingly public: Laverne Cox on Orange Is the New Black, Laura Jane Grace of [the band] Against Me! and, of course, Caitlyn Jenner. How did you think that’s affecting the general attitude toward trans people?

Annie: I totally take Olie’s point about opening people’s minds about the existence people. At the same time, it can make people think that you need to look a certain way, or that you go on the cover of a magazine and everything is great for you. I think much of the general population thinks, “Oh, we’re all right now, with trans rights. They’re on the cover of Vanity Fair, so everything is fine.” But nobody has the same experience, especially people of colour. These groups of trans folk are very oppressed. I just saw a superb initiative, #MyVanityFair, a hashtag where people take their own Vanity Fair covers.

Q: What sorts of challenges are you facing?

Olie: Sometimes, at the border, instead of taking 10 minutes to pass through, it takes 50. It’s really annoying. People can’t just mind their own business? We have to go in, and they do a whole report on it. I don’t mind answering questions, actually, but sometimes I feel like really getting into the trip, and it gets in the way. I used to tie my hair up or wear a cap [to avoid it].

Annie: Trying to be androgynous [really requires planning] . . . The barriers are so amplified for trans people, to the point where some people don’t even want to travel because they get in trouble travelling with the “wrong” ID.

Q: On the flip side, you mentioned that your school is very accommodating.

Annie: We have worked with the school and they have been sublime. They’ve been very good and very supportive. The problem is that those experiences are left to the subjectivity of the people who run the institution. Olie’s school is fantastic, but I know lots of young people who don’t have that experience. She’s going to middle school next year. There have been lots of struggle with that, such as with entrance exams.

Olie: A lot of the exams that I took, they said, “You have to write your gender.” And then they would pass down every single aisle and double-check everybody. [Because I didn’t mark my gender], it made me lose 10 minutes on the exam, and I didn’t get to finish it.

Olie: But the school I got into had very good people—very supportive.

Q: Your goal as of last January was to be an astrophysicist. Is that still the plan?

Olie: Yeah. I really like space; it’s a mysterious place, and no one really knows about it. It’s fun to explore something you don’t know and go further than you think would be possible.