Williams was first parented communally by members of the Black Panthers, before meeting Fonda at a summer camp and moving in with her. 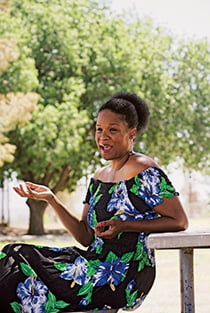 This interview was originally published on April 22, 2013

Although only in her mid-40s, Mary Williams has lived several lives. Born to members of the Black Panther Party, the infamous African-American rights movement, she was raised as a revolutionary. Then came years of poverty and privation. Still in her teens, she met Jane Fonda at a summer camp she sponsored and eventually became her adopted daughter. Williams’s 2013 book, The Lost Daughter, tells the story of her journey from Oakland, Calif., to Hollywood and back.

Q: Your parents were both members of the Black Panthers, and that movement shaped your early life.There was a lot of violence associated with that fight, but your own memories of the Panthers seem to be mostly good. Why?

A: Because it was a family. I would say that the Black Panthers were my first family. I wasn’t able to distinguish who my blood sisters were, from my Panther sisters, because we were all living in communal housing, and I wasn’t even sure, really, who my parent was because we were all parented by each other. It was very communal. There was a very strong feeling of: “you’re special, you’re wonderful, you’re part of something bigger.” There was no real sense of hierarchy. As a kid it was a very safe and empowering climate to be in.

Q: Many of your birth mother’s problems with alcohol started after she left the party.

A:I think if we had stayed it still would have gone south because the party was going south. The FBI had targeted the Panthers and was infiltrating and trying to destroy it from within, but at the same time the party leadership was corrupting. And so the party was deteriorating and turning in on itself, and becoming violent toward other Panthers. So I think my mother got out at a good time.

Q: It must have been a huge shock to leave the confines of the party and find yourself out in the wider community in Oakland, Calif.

A:It was, because I thought everybody thought the Panthers were wonderful, but when I got out I noticed that [in] the black community, many members [thought] that they were a bunch of thugs and so they were looked down upon. I came into public school and I said, “Well, my father’s in prison.” I was proud because he was a political prisoner, but outside of the Panthers, “Oh, your father’s in prison?”—it was like a stigma.

Q: One of your older sisters became addicted to crack and then turned to prostitution, and another had a baby at 15 and ran away from home, but you withdrew into books and dreams of becoming an actor. How much of that escape route was shaped by meeting Jane Fonda?

A: Well, my escape into books was before Jane. Books saved my life. And I read a lot of horror fiction, because my life seemed so scary. I thought, “If this kid can overcome this monster then I can overcome the fact that my family is falling apart.” I started thinking about being an actress after I went to the camp [where I met Jane] years later because it was a theatre arts camp and we put together these little plays, and so you get in your head that you’re this great actress.

Q: Those acting ambitions ultimately led you to being raped by a predator who was posing as a director, but you write it was almost a relief to finally be brutalized. That’s a hard thing for people to understand.

A: Growing up a girl in that community—and I think it’s in a lot of communities, even Oprah told me the same thing—there’s a point when I was a little girl that I felt very strong and empowered and I was a tomboy and I could go off by myself and wander in the woods, but the minute you hit adolescence and you start developing, I felt preyed upon. I’m 12 years old, and I felt suddenly like I had to protect myself, I couldn’t go out alone, and I had to disguise my body with the clothing that I wore. And not a lot of girls escaped that, but somehow I was getting away with it, and so when it finally happened I thought, “Of course it’s supposed to happen,” you know, “How am I any different from anybody else?” I thought, “Okay, I got caught.” Now I can think about something else.

Q: When you returned to the camp that next summer, after being raped, you confided to Jane what had happened and she offered to let you live with her at the end of that coming school year. Why was it important to you and her that you would go back to Oakland?

A: Even though my mother probably wouldn’t have cared—and she didn’t, obviously—but I had my Uncle Landon. He’s the one who got me to go to the camp—so it was more to tie up loose ends so it didn’t seem like she just snatched me. So she also—that was part of the deal, too—told them what happened.

Q: You moved in with Jane and her then-husband, Tom Hayden, to their house in Santa Monica. It must have seemed rather weird.

A: They really eased me into it, because I had a chance over the course of four summers at camp to acclimatize myself to this different culture. After four years of that, she wasn’t a star anymore because at the camp she had no make-up, she was always wearing sweats, so I kind of got used to her as just a normal person, so that by the time I lived with her that’s how I saw her. Initially when she took me I don’t think that she planned that “this was going to be my daughter,” and I didn’t plan that she was going to be my mom, she was just going to try to help me do school.

Q: That move to Santa Monica was effectively the end of your contact with your birth family for decades. Why?

A: There was one last trip when my sister was murdered when I did go back, but a lot of teenagers go through a period where they think, “Oh, I hate my mother.” I literally hated my mother.

Q: A couple of years later Ted Turner entered Jane’s life and your life, and you suddenly find yourself on a plantation with an oil portrait of Scarlett O’Hara in the living room. Were you surprised at how little race seemed to matter to you?

A: I was. I’m so glad you said that because race was everything when I was a child. When I became a part of this family I saw that class was more of a stronger issue even than race, even though race is a problem too. When the TV series Roots came out I remember watching that with Panthers, we were all, like, in this little Panther housing and everybody’s yelling at the screen and cursing out the slavemaster on the plantation, and then to be on what used to be a plantation was so bizarre. And I arrived in the middle of the night, by myself, and all those thoughts ran through my head, and when I opened the door there was Ted at the top of the stair yelling my name and had his arms out and welcomed me.

Q: He really became your father. Has that bond endured after the divorce?

A: Absolutely. I just saw him in December for my mom’s 75th and he’s just the sweetest. He always made time for the both of us to have time alone together.

Q: How did Jane and Ted’s separation play into that next restless phase of your life?

A: The great thing is that they remained friends, so I didn’t lose him. But it did send me in this frenzy of travel and searching.

Q: What were you looking for?

A: I had so much anger. I did expect when I left my mother—I was a minor—for her to say at some point, “Well, you can’t have my daughter,” and that never came, and I was relieved that that never came, but then I was also hurt. As I was hiking the Appalachian Trail, I had seen a story about an African-American woman who had been kidnapped and tortured. It made me think about my sister, which made me finally mourn her, and which made me want to go back and see people, but it took another couple of years to get up the courage to go back.

Q: During that period your relationship with Jane really became strained.

A: I was striking out at Jane as if she were my birth mother, because Jane told me early on, “You’ve had a lot of happen to you, and if you ever want to let out your anger you can do it, I can take it.” It was in my 40s that I finally let loose on her because I think I didn’t believe that she would really love me if I showed her my anger. And when I saw that she was true to her word, I think that’s when I truly felt, “Okay, she does love me, she is my mother, and she’s there for me.”

Q: The process of reconnecting with your birth mother was easy, but reconciling wasn’t.

A: In my mind she was a monster, she let awful things happen to her kids. It hit me one day—she was 23 years old when I was born and I was her fifth child. She was a single mother and she was poor, and no wonder she turned to alcoholism. Even with all that neglect and the abuse that we had she still managed better than most women in her situation. When that became clear, I was able to go back.

Q: In 2012 you arranged a meeting of your two mothers.

A: They laughed. Both of them are really funny. They shared their ailments.

Q: How has writing the book changed you?

A: I thought, “If I had a book deal and I tell them that I’m going to reconnect with my birth mother, then if I don’t do it I’ll get sued by them,” so it was like a nice incentive. I think I’m changed because I do have my birth mother in my life,and I’ve forgiven her. Because that was a hard thing for me, I was a person who would hold a grudge. If it were an Olympic sport I would be on the Wheaties box. I was damn good at holding a grudge.