On spring miracles and monarch butterflies

The monarch can rise to 10,000 feet. But every journey has its version of airport hell with bad food. 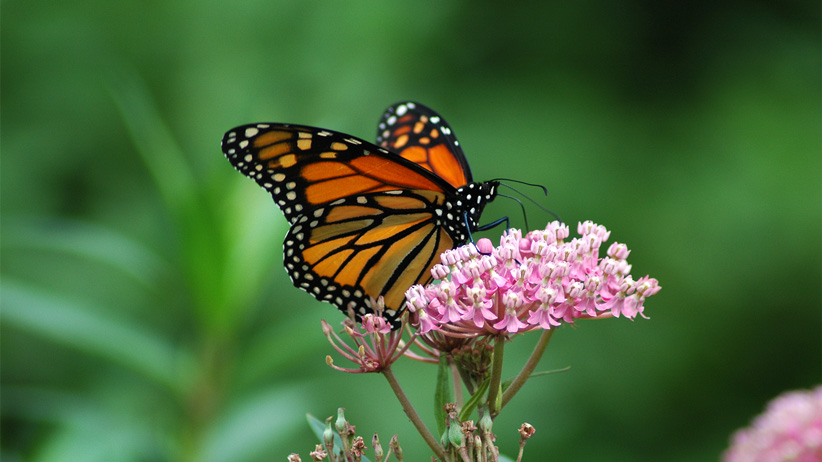 “Do you remember,” I asked the butterfly, “how you felt when you came out of your chrysalis and discovered you could fly?” The butterfly quivered. This was last October when I was chatting to lingering monarchs in our garden. “Did you have any memory, as your wings dried and you began to soar toward the sun, of what it was like to be a caterpillar, all wriggly and earthbound?”

I knew that in posing the questions out loud, I was getting perilously close to being a tree hugger. This dialogue is best kept to oneself, I expect, but when in spring miracles explode day by day, such conversations become irresistible until autumn’s end.

Yesterday the first warbler arrived all the way from—well I don’t know exactly—perhaps a condo garden in Florida. Now it flashes showy yellow feathers to the blue jays and cardinals who have lived here all grim winter long under the box hedges sharing sunflower seed, probably unwillingly, with foraging raccoons and squirrels.

Spring comes, the snow melts and our dogs discover bits of semi-frozen bodies half eaten by other animals. I swap the pathetic pieces of tail and intestine for cheddar cheese and wonder if this was a muskrat or squirrel felled by hawks before the snows came? The Cooper’s hawks are back too, a large pair soaring in swooping parabolas over the ravine garden. I found their signature, a small pile of red feathers underneath one of the feeders. Nature red in tooth and claw. Last week there were several small birds lying dead outside the dining room, whose glass windows reflect trees and branches—a false haven that kills when beaks slam into its mirage. You can get a coating for the glass, I was told, that will prevent this.

“In spring, at the end of the day, you should smell like dirt,” wrote Margaret Atwood. My dogs certainly do, wallowing in mud, glorious mud, everywhere. I’ve expanded my butterfly garden and we’re digging new channels all along the orchard fences for more milkweed. “Is that really necessary?” asked my husband. I had forgotten to mention the new beds of topsoil, which he unfortunately encountered in pouring rain when taking the dogs out at midnight. “It’s the best place for the monarchs’ milkweed,” I explained. “Far away from the nectar plants so the hummingbirds won’t eat eggs and larvae.” I am beginning to sound worryingly like a butterfly version of Bleak House’s Miss Flite, with her room full of birds to be released on the day of judgment.

Butterﬂies lend themselves to exquisite metaphors in literature, as well as less elegant ones on land, such as the black butterﬂy—allegedly the reincarnation of Ms. Amy Winehouse—that landed, it is said, on the shoulder of Kelly Osbourne at Winehouse’s funeral. The monarch is aptly named—the hero butterfly, circumventing airport security lines to make the longest insect migratory journey in nature each spring and autumn between back gardens like ours in Toronto to mountains in central Mexico. Weighing about half a gram or less and grabbing onto thermal currents, the monarch can rise to more than 10,000 feet and glide in an energy-efficient manner to make its journey of up to 5,000 km.

But every journey has its version of airport hell with bad food. Only milkweed can feed the larva, and milkweed reserves are going the way of the hedgerow as modern farming uproots everything to plant bloody corn. I blame a large part of this on a good acquaintance, Dwayne Orville Andreas, chairman emeritus of Archer Daniels Midland. Andreas was a sort of genius who fanned the faux notion that fuel made from corn (ethanol) was the way of the future. He wiped the floor in his fight with oil companies and environmentalists and now ethanol farm subsidies are major corporate welfare and everything gets plowed down to create those waving fields of gold—for ADM.

Butterfly expert David Gibo, who clearly loves all Lepidoptera, felt compelled to point out that that the monarch has no intrinsic agricultural or medical value and receives far more attention than it logically deserves. It is, wrote the University of Toronto professor emeritus, “just an insect . . . just a butterfly.” True. But as he agrees, there is little in our sophisticated world so accessible to imagination and inspiration as this creature’s migratory journey. This is a voyage in which the seemingly fragile traveller fights death in flight if the temperature goes over 33° C, flight failure if it drops below 12° C, death from black-eared mice on the ground and black-beaked orioles and grosbeaks in the air; death when high temperatures in Mexico and Texas force it to flee north too early, where nectar and milkweed have not yet bloomed. All creatures, humans included, battle for survival, but perhaps none with such extremes as the ﬁercely determined migratory monarch.

And they do remember something of life before “that perturbing mystery of metamorphosis,” as Primo Levi wrote of butterflies. Georgetown University scientists trained caterpillars to associate certain odours with mild shocks and discovered that the emerging adult moths and butterflies retained this dislike of the smell. Some memory cells had survived the extinction of the caterpillar and lodged in the winged adult. Perhaps we will come to understand the memories and instincts that make it possible to navigate routes across borders, lakes and even ocean to a fixed destination, whether alone, in small groups or the great clouds of thousands that flash overhead like rippling coloured fabric.

And here in Canada’s own backyard, we have a monarch hero in the form of David Suzuki, whose foundation can tell you everything you need to bring this brave little insect to your garden. I’ve never met Suzuki but I expect he will sit in the hereafter happily chatting away with millions of monarchs. And larva, pupa and butterfly—they will all, each one, remember him.