This special 55-year-old single malt may be one of the rarest, and most expensive, of its kind

It’s not often you see a Brinks truck parked outside an LCBO guarded by three men in kilts armed with bagpipes and a drum. But then it’s not often the cargo is a 55-year-old bottle of scotch heralded as one of the rarest–and most expensive–single malts in the world. 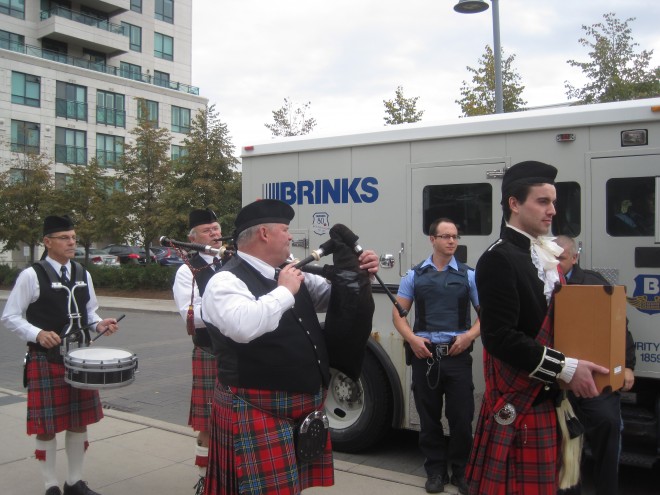 The bottle of Glenfiddich Janet Sheed Roberts 50 Year Old is one of 15 filled with the golden-hued spirit that the distillery’s then-Malt Master Gordon Ross deposited into an oak barrel  on New Year’s Eve 1955. The occasion? To honour “Wee Janie,” granddaughter of William Grant on her 110th birthday. Eleven of the bottles, which took four days to craft from hand-blown glass, will be auctioned off with proceeds going to charity. The sale of six has already raised more than $340,000. (The last was picked up by a U.S. buyer in March for $94,000 U.S.) Four bottles will remain with the family at the distillery.

The bottle of Janet Sheed Roberts 55 Year Old was carried from the Brinks truck into the Summerhill LCBO. Of course it was for ogling, not for sampling.

Instead we tried four other Glenfiddich single malts, starting with a 12-year-old. 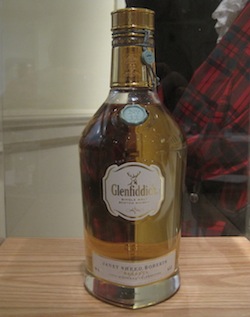 Full disclosure: Despite my father and brother attempts to educate me in the pleasure and pursuit of single malts, I’ll always reach for a glass of Barolo over a siphoning of Balvenie. But rest assured, these single malts did not get sniffed by an entirely undiscriminating nose. Previously, the fanciest scotch I ever tried was a bottle of  1978 single malt from the Islay region Port Ellen. My brother had bought it to drink with loved ones New Year’s Eve 10 years ago, the night he got married, which may be why I consider it the nicest single malt I’ve ever tried.

I thought about trying to put the 50-year-old into my mouth and then spit it into an empty water bottle or something, like a mother bird might do for her little baby bird, such was my desire to share it with family. Unconvinced the plan would work, I did the tasting. They used a lot of peat back in 1938/39 at the distillery when they were still drying it in-house. But remarkably, the fruit still popped and the peat and smoke didn’t overwhelm some pretty spectacular floral notes.  And the colour! It was so light, like a heavily oaked chardonnay, like autumn sunshine in a bottle. Most memorable, however, was how it felt going down, or rather didn’t feel: There was no burn. It was simply sublimely smooth.

The Toronto auction will take place Oct. 19 at 8 p.m. at the Trump Tower, though you can bid online from home. Reserve bid is $50,000. Proceeds will go to Wounded Warriors, an non-profit organization that helps full-time and reserve Canadian Forces members who have been wounded or injured in their service to Canada since 1990.

Founder and fundraising chair Captain Wayne Johnson was at the LCBO tasting and in heartfelt speech he articulated how fantastic it was that one of the last family-owned businesses is helping out families in great need. “I’d rather lose a little finger than have to battle with some of this mental health stuff, ” said Johnson. “You have no idea what [these programs] do for their souls.”

I’d drink to that.