One man's mission to find the presidential origins of his cabinet 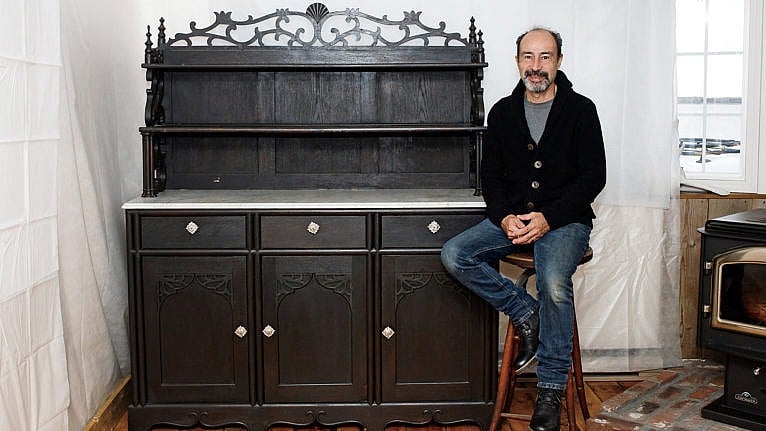 Brian Doucette’s yard was strewn with old tables and wagon wheels for a Saturday morning garage sale in the summer of 2017 when an older couple pulled up to his red Victorian home near the coastal town of Shelburne, N.S.

The couple showed Doucette a piece of paper with a photograph of a 1930s dark-stained oak hutch. Would he be interested in buying it? “Sure,” said the antique buff, who is now 54. He needed furniture for his newly purchased farmhouse.

Two days later, Doucette paid the couple $350 and loaded the heavy, marble-topped cabinet onto the back of his black F150. The New York couple said they’d received it as a wedding gift in 1975. Their friend had bought it from a family friend who was an antique dealer, and who said it came from an auction at the Franklin D. Roosevelt estate in Hyde Park, N.Y. A tad skeptical, Doucette took it home, placed it up against the green-striped wallpaper in his dining room and didn’t think much more about it until about two weeks later.

He was at work, sandblasting a minesweeper in a shipyard, when his feet suddenly felt heavy, as if his boots were soaked in water. That’s weird, he thought. The next day, he felt it again—a brief numbing sensation, this time all the way up his legs. Doucette was scared. He had always been healthy, and worked hard on his feet and with his hands. Now, he worried there might be a cancerous tumour on his spine. He lay on a red overstuffed sofa in his living room, nervously awaiting doctors’ appointments and test results, distracting himself by looking up the history of several antiques he had around the house on his iPad. Eventually, he turned his attention back to the cabinet. Could it really have come from the White House?

Doucette started reading about the Roosevelts. He learned that the former first lady Eleanor Roosevelt had established a small furniture factory called Val-Kill Industries in 1926. He noticed that the frame and the scroll patterns on the bottom of the cabinet appeared to be the same as the pieces made at Val-Kill. “By geez, they were telling the truth,” Doucette remembers thinking. But when he reached out to experts, they told him they had never seen or heard of a piece of Eleanor Roosevelt’s furniture with a white marble top. They also said his cabinet was a foot lower than other pieces.

Meanwhile, Doucette’s health worsened. He suffered falls, dislocating both of his elbows. The doctors knew there was something neurological going on with him but they didn’t know what it was. His legs no longer felt like his own but like two stilts made of rubber. The numbness reached his belly button. There were long afternoons languishing on the sofa with his German shepherd, Rhine, stretched out next to him. Doucette grew increasingly worried that he might never walk again, or worse, that he was dying of cancer. Engaged to be married, he felt anxious that he might never feel his partner’s touch again. Delving deeper into the origins of the cabinet helped take his mind off it all.

Eventually, Doucette found an email for the Roosevelts’ granddaughter, Nina Roosevelt Gibson. He reached out to her in Arizona, and she encouraged him to keep going. Then one day, on the advice of an expert, Doucette scoured the interior of the cupboard with a flashlight. Inside one of the drawers, wedged between two adjoining pieces of wood, something shiny and silver caught his eye. Doucette wrenched out the object with a pair of pliers. It was a salt spoon—a tiny utensil used to dish salt out of a salt cellar. He peered at it under a magnifying glass: it was monogrammed with an “R.” After searching an inventory list for the Roosevelts’ Top Cottage in Hyde Park, Doucette discovered that the former president owned a silver salt and pepper pot set.

In spite of all these clues, Doucette doesn’t have definitive proof that the cabinet is a presidential antique. Experts at the National Park Service and the Franklin D. Roosevelt Presidential Library and Museum have stopped responding to his inquiries, having advised him that, without photographic evidence from the Roosevelt estate, there is no way to confirm the cabinet was part of the presidential home. Still, Doucette is not deterred. He says he plans to continue searching for evidence, possibly in the Roosevelt archives, which have been closed to the public due to the pandemic. “The proof is out there,” Doucette says in an email. He evokes Winston Churchill’s 1940s wartime speech, adding that he will “never surrender.”

RELATED: The joy of clutter

On the matter of his health, Doucette did receive a clear-cut answer. He was diagnosed in January 2018 with multiple sclerosis. He walks with a cane and is off work permanently, on disability. He predicts someday he will get around in a wheelchair like Franklin D. Roosevelt, who suffered from polio. And maybe the lower, more accessible shelves of the cabinet, where he displays a Chinese carving and a German metal toy motorcycle, will accommodate him, just as he believes they did the former president. It’s an incredible twist, he says, that of all people, the cupboard found its way to him.

This article appears in print in the April 2022 issue of Maclean’s magazine with the headline, “Following a hutch.” Subscribe to the monthly print magazine here.