Open minds and dazzling possibilities: An excerpt from The Spark

In this book excerpt, Kristine Barnett introduces her son Jacob, a 15-year-old boy with an IQ higher than Einstein’s

Maclean’s political editor Paul Wells’ profile of a 15-year-old autistic boy who’s now one of the world’s most promising physicists has been a top story on our site for days. Jacob Barnett eventually landed at Waterloo’s Perimeter Institute for Theoretical Physics. His mother, Kristine, chronicled her son’s incredible life in a recently published book, The Spark: A Mother’s Story of Nurturing Genius.

On Sept. 10, Wells will chat with both Barnetts. Join us at 1 p.m., when Wells will discuss other Perimeter personalities, debates in modern physics, and the future of Kitchener-Waterloo. Then, at 1:30, join the Barnetts in conversation.

In the meantime, here is an excerpt from The Spark: 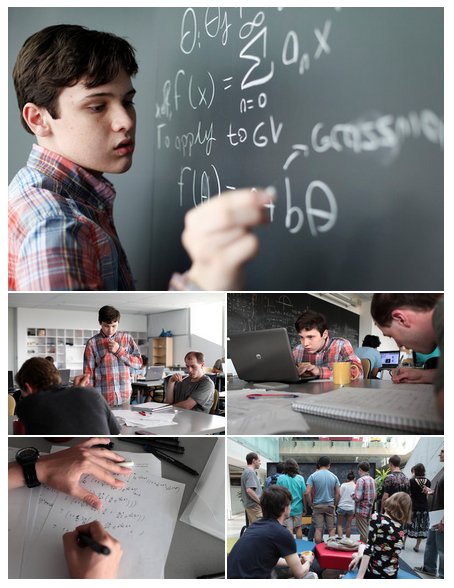 I am sitting at the back of a university physics class while the students cluster in small groups around the whiteboards lining the lecture hall, ready to tackle the day’s equation.

Work proceeds in fits and starts. There’s a great deal of erasing. As the teams of students begin to bicker, I catch a glimpse of my nine-year-old son at the front of the room, chatting easily with the professor. The frustration level in the room mounts. Finally, my son pulls a chair over to a whiteboard and steps up on it. Even so, he must stand on his tiptoes, straining his arm as high as it can go.

This is his first encounter with the equation, just as it is for all the other students in the class, but he doesn’t pause to deliberate. Instead, the numbers flow fast and fluently from his pen. Before long, everyone in the room is watching. The students from the other teams stop their work to stare at this little kid in the backward baseball cap. My son doesn’t notice the gaping onlookers because he’s happily engrossed by the numbers and symbols flying onto the board. They mount up at impossible speed: five lines, then 10, then 15, spilling over into the whiteboard space of the group next to his.

Soon he’s talking to the others on his team, pointing and explaining and asking leading questions, the way a teacher would. A serious woman with a French braid breaks away from her own group, drawing closer to listen. She’s joined by a stoop-shouldered young man, who nods his head vigorously as comprehension dawns.

In a matter of minutes, all of the students at the front of the auditorium have gathered around my little boy. When he points out a trick he’s found in the equation, he bounces on the balls of his feet in delight. A bearded student calls out a question. I glance over at the professor, who is leaning against the wall with a smile on his face.

Now that they get the problem, the college students rejoin their own groups, and their markers begin to move as well, but the tension in their body language is unmistakable: No one in the room loves the equation like my son.

Class is dismissed, and the auditorium empties. My son packs up his markers, talking animatedly to a fellow classmate about a new NBA video game they both want. As they come up the stairs toward me, the professor approaches and extends his hand.

“Mrs. Barnett, I’ve been wanting to tell you how much I enjoy having Jake in my class. He’s bringing out the best in the other students, to be sure; they’re not used to being lapped like this. To be honest, I’m not completely confident I’ll be able to keep up with him myself!”

I laugh along with him.

“Oh, gosh,” I say. “You’ve just pretty much described the story of my life.”

My name is Kristine Barnett, and my son Jake is considered to be a prodigy in math and science. He began taking college-level courses in math, astronomy and physics at age eight and was accepted to university at nine. Not long after, he began work on an original theory in the field of relativity. The equations were so long they spilled over from his gigantic whiteboard onto the windows of our home. Uncertain how to help, I asked Jake if there was someone he might show his work to, and a renowned physicist I contacted on Jake’s behalf generously agreed to review an early iteration. He confirmed that Jake was indeed working on an original theory and also said that if the theory held, it would put him in line for a Nobel prize.

That summer, at age 12, Jake was hired as a paid researcher in physics at the university. It was his first summer job. By the third week, he had solved an open problem in lattice theory, work that was later published in a top-tier journal.

A few months earlier, in the spring of that year, a tiny article had appeared in a small local newspaper about a small charity my husband, Michael, and I had founded. Unexpectedly, that piece led to a story about Jake in a larger newspaper. The next thing we knew, camera crews were camped out on our lawn. Our phone rang off the hook with film people, talk shows, national news outlets, talent agencies, publishers, elite universities—the reporters and producers all desperate to interview Jake.

I was confused. I can honestly say that at the time, Michael and I had no idea why so many people were interested in our son. Sure, we knew Jake was smart. We understood that his abilities in math and science were advanced and that it wasn’t “normal” for him to be in college. But Michael and I were squarely focused on celebrating different victories: the fact that Jake had a decent batting average, a close group of friends his own age who liked to play Halo: Reach and watch movies together in our basement, and (although he’ll kill me for mentioning it) his first girlfriend.

These typical things in Jake’s life are, to us, the most extraordinary. So when the media descended, we were utterly baffled. It wasn’t until we had talked with some of those reporters and read or heard the stories they wrote that we began to understand our disconnect. The truth is, it took a glaring spotlight to show Michael and me that the story line of our lives with our son had changed.

You see, what those reporters didn’t understand was that Jake’s improbable mind is all the more remarkable for the fact that it was almost lost. When the media showed up on our lawn, we were still living inside the diagnosis of autism Jake had received when he was two. We had helplessly looked on as our vibrant, precocious baby boy gradually stopped talking, disappearing before our eyes into a world of his own. His prognosis quickly went from gloomy to downright grim. When he was three, the goal the experts set for him was the hope that he’d be able to tie his own shoes at 16.

This is the story of how we got from there to here, the story of a mother’s journey with her remarkable son. But for me, more than anything, it is about the power of hope and the dazzling possibilities that can occur when we keep our minds open and learn how to tap the true potential that lies within every child.

Excerpted from The Spark: A Mother’s Story of Nurturing Genius. Copyright © 2013 Kristine Barnett. Published by Random House Canada, which is a division of Random House of Canada Limited. Reproduced by arrangement with the Publisher. All rights reserved.