Q&A: Our complicated relationship with zoos

From 2015: Sociologist David Grazian on the evolution of the zoo, the false authenticity that it purveys—and the underpaid women who do all the work 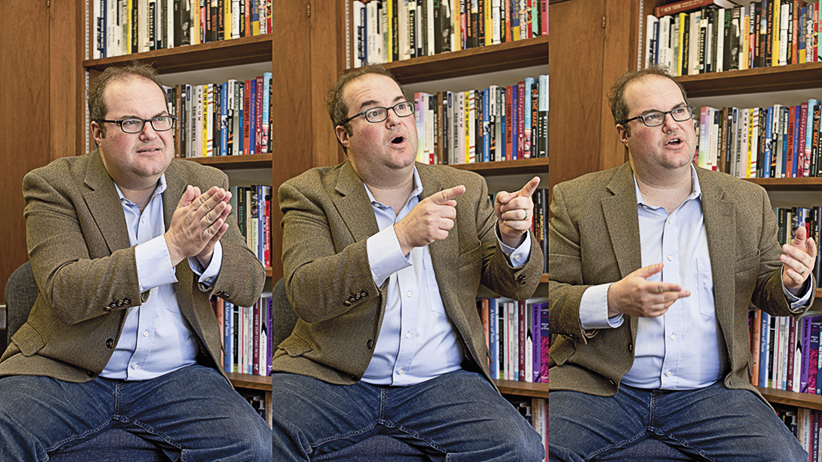 A professor at the University of Pennsylvania, David Grazian spent years studying the intricacies of American nightlife. When his son was born, he traded shot glasses for poop shovels, working behind the scenes as a volunteer zookeeper. The result, American Zoo: A Sociological Safari, is a troubling—and sometimes nauseating—glimpse into how it all comes together, from feeding rituals to fake landscapes. Along the way, Grazian uncovers just how deeply humankind misunderstands the wild kingdom it has long controlled.

Q: Up until now, your research specialty has been urban nightlife: bars, dance clubs, blues lounges. Why the shift to zoos?

A: The most honest answer is: Once my son was born, I could no longer stay out all hours of the night. I was still hoisting a bottle at 2:30 in the morning, but it was a bottle of formula instead of beer. The nightlife scene was no longer a possibility, nor did I have much of a thirst to do it during my new life stage as a father. But I did find myself at the Philadelphia Zoo every weekend, taking my son to see the elephants, the gorillas and the orangutans. Over time, I began to see some of the ways in which the zoo sort of resembled a nightclub: these extraordinarily staged environments where a kind of authenticity was performed for a visiting public.

Q: If nothing else, you were certainly willing to get your hands dirty for this research project, volunteering at two different zoos. How did fellow zookeepers react to a sociology professor conducting field work?

A: I wasn’t like any other volunteer. The volunteers at most zoos are either high school or college interns, or they are retired men and women who work as docents or educators. They are not thirtysomething guys with professional jobs and kids in grade school. The fact that I worked hard and was committed to learning what I could about the zoo helped me gain a lot of trust—that, and the fact I was willing to shovel literally wheelbarrows full of poop. I shovelled all kinds of s–t: chicken, cow, horse, duck, goat. I got bitten by small mammals. I got puked on by vultures. I suffered all these humiliations along the way, and I think that helped ingratiate me to the zookeepers around me.

Q: Not to mention that you became pretty adept at preparing lunch for the animals.

A: It’s funny. On the one hand, when you’re doing work that under normal conditions would feel extraordinarily repulsive—like using a ladle to pour blood over the ground horse meat of an animal’s meal, or slicing up rats to be fed to a falcon, or slicing up a mouse’s body cavity so I could insert raw meat into its guts—it’s amazing what you get used to in a very short time. At a certain point, the volunteer staff counted on me to work with raw meat and to slice up the rodents because I was used to it. It no longer bothered me in the way it clearly bothered other volunteers. There are volunteers who quit on the first day because they can’t stomach it.

Q: Most visitors wouldn’t be able to stomach it, either. Which is why zoos go to extraordinary lengths to sanitize what the public actually sees, including, for example, any sign of a wildcat chewing on a Bambi-like deer carcass. What does that reveal about us?

A: Humans want very much to interact with the natural world, but only on their own terms. We claim that we want to see nature in all its authenticity, but the truth is much of what we identify as natural and authentic has been reconstructed for our own benefit. Niagara Falls was reconstructed at the turn of the century in order to get more water over the falls and create a more scenic view. Most North Americans experience the natural world by visiting national parks and forests, which are carefully regulated by 300-page manuals that tell us what we can and cannot do. And when we go to the zoo we want to see animals that are at play or extraordinarily active, even if their natural behaviour is to remain dormant. People love to hear a lion’s roar but lions tend to roar at dawn and at dusk when most zoos are closed, so people will bang on the glass enclosures to try to wake up them up so they’ll roar like the MGM lion does before a film.

Q: Can you blame us? We are programmed to see tigers as breakfast cereal mascots and panda bears as cartoon kung-fu fighters. We think killer whales were born to entertain us.

A: I would be lying if I said that I myself don’t get bored when I walk around the zoo and I see lots of animals at rest. In a lot of ways, the history of zoos has taught people to expect that animals will be on stage—that animals are in captivity in order to perform for us. But zoos have changed a lot.

Q: How have they changed?

A: Today’s zoos routinely serve as sanctuary for animals that have been injured in the wild and are rehabilitated, and have to live in captivity because they could no longer survive in the wild. And that can help reorient the zoo visitor into thinking about our relationship to the natural world as stewards of the environment. Secondly, zoos can serve as schools that can teach the general public about not only human evolution, but the lessons we need to learn about environmental crises, particularly global warming and global climate change. Maybe not in the Canadian context, but certainly in the American context, global climate change has become so politicized and partisan. Zoos are really these special institutions because they attract a mass audience: young and old, religious and secular, Republican and Democratic. And so in a lot of ways, zoos provide an apolitical ground that can really sound the alarm bell on what it would take to save endangered species threatened by climate change.

Q: One of the things that struck me most about your research was the “feminization of zoos.” Today, three-quarters of American zookeepers are women, earning barely US$12 an hour. What’s behind that trend?

A: It’s happened for a number of reasons. Part of it is that the role of the zookeeper was traditionally thought of as the grunt work done by a field hand, based on domination. Today, animal care relies much more on providing environmental and behavioural enrichment to animals to stimulate their senses, so as the job has turned from one characterized by domination, zoo professionals now see their role much more as caregivers. So in a way, that has attracted women and discouraged men, and as these jobs have become more associated with caregiving, the wages have stagnated in the same way that all caregiving roles are often underpaid because they’re associated with women’s work.

Q: Not surprisingly, your book explores the tension at the heart of all zoos: Should they exist? But the ethical debate about keeping animals in captivity is not as black and white as it may appear, is it?

A: Very often, what people consider to be inhumane conditions are far from it. People will look at a gorilla lying out in the sun on an 80-degree day and complain that the gorilla must be really hot because [the people] are hot. But in the wild, that gorilla lives in equatorial Africa and lives under conditions of heat and humidity that far surpass what any animal would experience in a North American zoo. People will ask zookeepers: “Wouldn’t that gorilla be more comfortable if you gave him a swimming pool?”—not realizing that most gorillas can’t swim and would likely drown in a swimming pool. People very often misunderstand or misinterpret what they imagine to be the experience of animals in captivity. On the other hand, there is a great deal of complexity that zookeepers themselves think about. The moral lines are very blurry.

Q: Even you argue that the time has come to reconsider whether some of the most highly intelligent mammals, from great apes to elephants, should remain in zoos or be transported to much larger animal sanctuaries.

A: I think it’s time for a debate, but it’s hard for me to really know the answer. Chimpanzees share 98.4 per cent of their genetic makeup with humans, and so once you start to think about that—that chimps are genetically closer to humans than they are to gorillas and other apes—it makes you think about where we might start drawing a line. On the other hand, I think about how many people really begin to understand the science of human evolution by looking into the faces of great apes, and how it’s apes in captivity that inspire so many people to feel a kind of affinity with nature and the animal kingdom that they otherwise would not experience.

Q: So you don’t judge which side is correct?

A: That’s absolutely right. Lord knows I’ve met enough animal rights activists and zookeepers to know that these are all deeply thoughtful people that care an awful lot about animals. In a lot of cases, there are no easy answers. One of the goals of the book is to present these complexities so at least we can have a learned discussion based on realities as opposed to our prejudices and desires for what we think the natural world ought to be like.