Leaving behind bush camp life, she started a booming cosmetics business. She was happiest on the open road on her motorcycle. 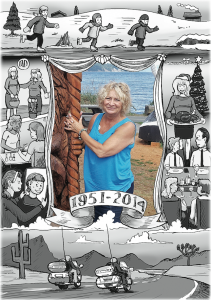 Patricia Dale Root was born on Feb. 13, 1951, in Oshawa, Ont., to Frank McCammond and Geraldine Clark, who owned a variety store. Her childhood winters were spent skating down the creek near her parents’ house to school, and summers meant playing with her siblings, Penny and Derek, in the alley behind the store, where barrels of birch tar offered an endless supply of homemade chewing gum.

In high school, Patricia met John Heinen and the sweethearts were married in 1969. After their first child, Eric, was born that same year, the pair moved to northern British Columbia, where John found work building highways. As he moved from Deep Lake to Mica Creek to Honeymoon Creek to work on projects, Patricia and Eric followed. “They lived in teeny camps in the middle of nowhere, living in little trailers with no water,” says Anita Wlasitz, her daughter, who was born seven years later in 1976. “She was a city girl in the wilderness.” Although Patricia developed a taste for moose meat, she left bush camp life behind when she and John moved to Kamloops and separated in 1980—and she swore she’d never touch wild meat again. Four years later, she moved to Campbell River on Vancouver Island.

Within the year, she saw an opportunity in a faltering cosmetics shop inside the town’s mall. She bought it and over the course of a couple of years turned the business around, doubling its size to eight employees. Along with selling makeup and piercing the ears of nearly every girl in town, she became Campbell River’s go-to manicurist.

In 1986, Patricia decided to pursue a dream of getting her motorcycle licence. She had remarried to a man in Campbell River named Don Root, an avid biker, and had grown tired of riding as his passenger. Now in the driver’s seat, summer vacations were spent taking road trips through the Rocky Mountains with Anita on the back of her mother’s Yamaha Virago (until she turned 16, when she got her own). “The sun on her shoulders and the wind on her face: that’s when she was happiest,” Anita says. Patricia and Don were members of the international Gold Wing Road Riders Association (Don rode a Honda Gold Wing), and Pat ran rider safety sessions for the association’s Campbell River chapter, setting up orange cones in empty parking lots so riders could practise manoeuvres. On their travels, they’d often stop at Gold Wing rallies, where Pat would enter her beloved bike in the beauty contests. She and Don separated in 2001.

Over the years, anyone who didn’t have a place to go at Christmas would receive an invitation from Patricia. Her little house would fill with people serving themselves turkey and freshly baked bread. The town’s RCMP constables would stop by to pick up plates she prepared for them. Patricia also volunteered for the Delaware Program, a youth drop-in run by the John Howard Society offering career counselling, literacy courses and life skills. Among other things, she would do nails for free for teens from the program who graduated high school.

When Eric and Anita grew up and started families of their own, Patricia’s four grandchildren spent summers picking blackberries and eating corn on the cob in her backyard, calling her abuela, or grandmother in Spanish, a reference to the weeks every winter she spent vacationing in Mexico. Two years ago, she became a great-grandmother.

In 2012, she got a call from Warren Burd, a retired car dealership owner in Campbell River. “You should phone Pat, she’s a single lady and rides motorbikes,” one of Patricia’s nail clients told Warren, also a biking enthusiast. He called her up and asked her out. Before long, the couple was biking together, touring Vancouver Island. Patricia, whose loud voice and sarcastic wit were known to fill up a room, softened and fell in love.

Last fall, Patricia decided to retire. In November, she and Warren left for a five-month-long dream trip to Palm Springs, Calif. They spent their days gardening and doing day trips through the mountains on their bikes. Patricia had recently got a Harley-Davidson. “She was having the absolute time of her life,” Anita says.

On April 6, they were riding near Joshua Tree National Park when another motorcyclist, a 27-year-old who was new to riding, came around a corner, lost control of his sport bike and collided with Patricia. She was pronounced dead at the scene. The other rider died later in the hospital. Patricia was 62.