How a pesky peacock invasion is dividing a Surrey, B.C. neighbourhood

Nature’s most beautiful bird or a car-attacking menace? Peafowl are causing conflict among residents. 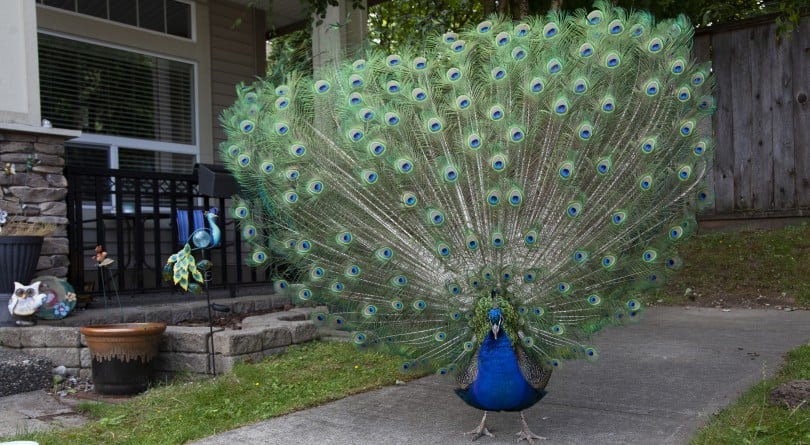 Peacocks become a disturbance to some residents in a Surrey Neighbourhood. (Photograph by Jen Osborne)

“I have been through hell, man,” says Parm Brar, standing inside his garage in Surrey, B.C., while his nine-year-old daughter pedals by on her pink bike.

His particular hell came at the hands—or rather the wings, poops and squawks—of one of the more beautiful birds on earth, the blue peafowl, a bird native to the Indian subcontinent. The male’s radiating tail fan is one of nature’s gaudy splendours.

Brar, 42, lives on a corner of the well-to-do and ethnically diverse Sullivan Heights neighbourhood of Surrey. It’s been a favourite hangout since the late 1970s for an increasingly large muster of feral peafowl. (The males, which sport the psychedelic tail plumage, are properly called peacocks; the duller-looking females are peahens.)

In particular, the peafowl—sometimes 30 or more of them—roosted for years in a tall Douglas ﬁr tucked into a corner of Brar’s backyard, just metres from one of his children’s bedroom window.

READ: The pandas are going to the Calgary Zoo. How safe will they be?

Brar bought his house seven years ago, when his daughter was two. “I hardly remember her ever playing in our backyard because you constantly clean the [peafowl] poop.” A shipper/receiver for a liquor distribution company, Brar gets up at 4:05 a.m. for work. The peafowl’s shrill, haunting calls give the neighbourhood the auditory feeling of a jungle. “When it’s mating season, they drive you nuts,” says Brar. “You get less and less sleep . . . I couldn’t handle this anymore.”

On April 29, Brar, having repeatedly but fruitlessly begged the city of Surrey for help since 2016, took matters into his own hands. He cut down his Douglas ﬁr—even though the city previously denied his request for a tree-cutting permit. That act resulted in a $1,000 ﬁne for taking down the tree without a permit. The city is now taking Brar to court in an effort to increase the fine, says Jas Rehal, manager of public safety operations for the city of Surrey. The maximum fine is $10,000.

Brar’s desperate act also reawakened long-simmering differences in attitude toward the birds, which were raised by a farmer in the area decades ago when the neighbourhood was mostly farmland. When that farmer sold to developers, local lore goes, he left some peafowl behind.

On a neighbourhood Facebook group called Nosey Neighbours, Brar has been called an “idiot,” a “scumbag” and worse for his anti-peafowl action. “They were tearing me down on that Facebook page,” he says, exasperated.

Cindy Dalglish admits she was among those who came out against Brar “with guns blazing.” But after a local media report detailed Brar’s long effort to get help from Surrey ofﬁcials, Dalglish, 43, had a change of heart. “I didn’t know how it was impacting residents here.” In apology, she took a box of Girl Guide cookies to Brar and publicly retracted her criticism of those calling on city council for a peafowl purge.

Dalglish, who lives a bit further away from the peafowl epicentre, met with Brar and other affected residents. “It opened my eyes to, yes, the peacocks are beautiful when they are just standing there . . . but the negative impact to our neighbourhood is far greater than their beauty.”

On June 25, after what some residents say was years of dithering, Surrey city council voted unanimously to live-trap and humanely remove peacocks from Sullivan Heights. The city, acknowledging in a report that it’s been getting peafowl complaints since 2010, plans to relocate the birds ﬁrst to the Surrey Animal Resource Centre. Then they’ll be adopted by zoos, sanctuaries, farms and other appropriate locations where they are wanted.

MORE: How a stressed woman found solace through looking at birds

In a report to city council, Rehal wrote that a residential neighbourhood is an inappropriate place for peafowl, and that “tensions continue to rise in the area, and staff receive a high amount of daily calls, emails and complaints.”

Among their avian transgressions, the males tend to peck at their own reflections on the sides of cars, perceiving the images as competition for peahen love. One resident pointed to beak scuffs on the side of his grey Toyota Corolla. The beaked vandals prefer darker cars, but they aren’t picky about model; over the years, they’ve scratched up BMWs and Mercedes, too, causing thousands of dollars in damage.

For Brar, the relocation plan feels too late for him. If the city had acted sooner, he says, “the tree would have been still there. I would have the same image in the neighbourhood.”

Many locals, including Ryan Cragg, point to one house as the focal point of the problem. It has a warming shelter, feeding trough and water source for the peafowl, he says. On a recent visit to the neighbourhood, cages, peahens and at least a dozen chicks could be seen in the yard. (The owner, who’s clearly on the side of the peacocks, couldn’t be reached for comment.) 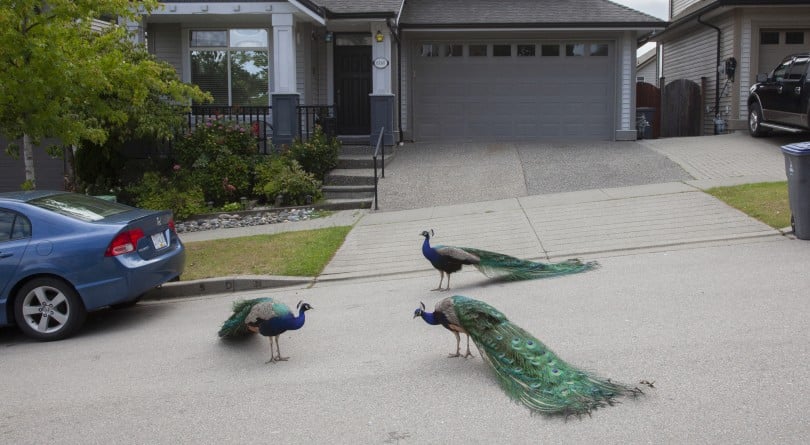 Peacocks become a disturbance to some residents in a Surrey Neighbourhood. (Photograph by Jen Osborne)

Cragg, 44, a software technology trainer, admits he’s “plinked” at peafowl in trees near his home with plastic BBs from an Airsoft gun when they vocalize at annoying hours. When they do, he says, “it sounds like someone is being killed.”

Jerry Barr, who lives on 62nd Avenue in the peafowled neighbourhood, professes himself a friend of the birds. “I’m easygoing with them. We knew what we were getting into when we bought the property [in 2009].” He ridicules the city’s estimate that about 100 peafowl populate Sullivan Heights, insisting the number is between 30 and 40 at most.

With a decision at last, it’s still unclear when the human squawking in Sullivan Heights might subside. Many residents, says Dalglish, are now miffed that the city failed to consult with the community ﬁrst, as promised, before voting on the new action plan.

The city promised an information night July 12 to inform the community how it will remove the peafowl from Sullivan Heights.

Clearly, it won’t be easy. After his department consulted other cities with a similar problem, including Longboat Key, Fla., and Rancho Palos Verdes, Calif., Rehal wrote in his report to city council that both jurisdictions failed to catch all their peafowl. With each hen laying clutches of three to eight eggs annually, escapees can quickly repopulate an area.

And there’s a suggestion that some peafowl fans and activists will foul relocation efforts by tampering with traps and releasing birds themselves.

Nevertheless, Cragg maintains he and some neighbours will get traps from the city as soon as possible for their properties, though he admits sabotage is a worry. And though he’d prefer peace reign in Sullivan Heights as peafowl are taken away, he expects he’ll get some strong backlash for being among those who pushed Surrey ofﬁcials to ﬁnally act.

“But ultimately,” he says, “having the birds gone will improve my quality of life enough that I don’t really care what those who put peacocks ahead of people think.”