Playing, with fire: How much risk should we expose our kids to? 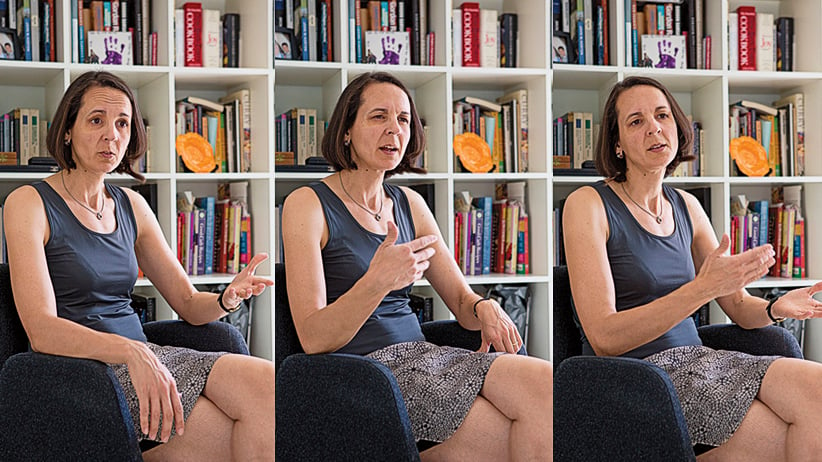 Letting children slip the leash and engage in risky outdoor play offers huge benefits to physical, emotional and social health, says Mariana Brussoni, an assistant professor at the University of British Columbia’s school of population and public health. Brussoni is lead author of a review of play research published last week in the International Journal of Environmental Research and Public Health. Overprotective parenting and tediously safe playgrounds contribute to a decline in rough-and-tumble play and a generation of sedentary children. The report concludes: “There is a need for action to slow or reverse the trend in order to promote and preserve children’s health.”

A: I was actually born in Uruguay. When I was four, we moved to Calgary. I have lots of memories of going to the Bow River in Calgary to hunt garter snakes.

Q: So how many broken bones, cuts, bruises and near-death experiences did you have?

A: As a child? Zero. As an adult, since I’ve been in injury prevention, I’ve had two [broken bones]. That’s quite ironic.

Q: It’s also ironic that the week this study was released, you were speaking at an injury-prevention conference in Halifax.

Q: Your research reviewed 18 studies that examined “play where children can disappear [or] get lost, play at great heights, and rough-and-tumble play.” I picture helicopter parents squirming in agony as I say this. Why did we develop this parental paranoia?

A: We have this growing movement to what I call anxiety-based caregiving—caregiving where decisions about childhood and what children need are made based on anxiety, rather than stepping back a bit and thinking about what might be best for child development. You’re in a playground and you hear, “Be careful!” “Get down!” “Watch out!” Those are things that are based on anxiety, not on stepping back and thinking: What does the child hear when you’re saying those things? What the child hears is: “The world is a dangerous place. You don’t trust me to navigate that world. I need you to take care of me; I can’t be independent myself.”

Q: Are those fears legitimate? Are more kids losing eyes, breaking backs, being scooped by strangers?

A: As an injury-prevention researcher, I know the data. Kids have never been safer than they are right now. When I talk to parents, they are afraid of injuries in general, but there are two things that overwhelm them. One is kidnapping—“stranger danger.” The other is motor vehicles, their child being hit by a car. Kidnappings are so rare, it’s really hard to get statistics on them. The last statistics I was able to find were from a report from the RCMP looking at kidnappings in 2000-01. Kidnappings happen, but kids are being kidnapped by people they know. In that two-year period, there was only one instance of a child getting kidnapped by a stranger. It works out to a rate of one in 14 million. The likelihood is very small. Parents are right to be afraid of motor vehicles; they are the leading cause of death for children. But what parents don’t realize is that it’s kids in cars, not kids outside of cars.

Q: So kids being driven to piano practice, as opposed to kids running across the street?

A: Exactly. Pedestrian injuries happen, but it’s eight times more common for a child to actually get seriously injured in a car than outside of it. Parents, in an effort to keep children safe, are driving them around from one supervised activity to another, not realizing that they’re actually putting them in more danger that way.

Q: What do parents say about your research? Are you considered subversive?

A: With parents, I can tell them there’s a one-in-14-million-chance that their kids will get kidnapped. I can tell them their kids are more likely to get hit in a car than out of it, and it has very little impact. What influences parents is the research showing how a lack of ability to take risks affects their child’s development, health and well-being.

Q: Let’s explore that. What are the benefits?

A: The studies showed that physical activity increased, while sedentary behaviour decreased. Social health and behaviour increased, and, what’s also important, there were no adverse effects in engaging in risky outdoor play.

Q: They also found benefits I wouldn’t have expected: conflict resolution, even negotiating decisions about substance abuse and sexual behaviour. How are they linked to risky outdoor play?

A: In supervised activities, there’s somebody else guiding the activities; they don’t have to set the goals for what they want to do and how they want to engage in it. When they’re out in the neighbourhood, they’re deciding, “Okay, let’s build a fort. Let’s play prisoner. Let’s play capture the flag.” They’re negotiating back and forth to decide what the rules will be, how it’s going to work, who’s going to do what. There’s a lot more opportunity to develop those social skills.

Q: Are you a parent?

Q: Do you have any difficulty balancing the risk-reward concept?

A: No. I live in [east] Vancouver. We have a halfway house not far from our house. We have a mental health community integration facility across the street. There are lots of diverse groups that go through our neighbourhood, but I am very comfortable with letting my kids wander it. There’s a park at the end of our block; you just have to cross a small street to get to it. I’m very comfortable letting them go to that park. There are lots of other kids on the street, so that helps. Fortunately, it seems most of the parents on the street have the same philosophy, so there are kids outside all the time, wandering around and creating games for themselves.

Q: Have they rewarded your confidence?

A: My kids are very cautious kids in general, so I worry very little about them, in that sense. We give kids too little credit. If you just button your lips and let them get on with it, they actually are really good at figuring out their limits. They’re also really good at figuring out other’s limits, and keeping each other within reasonable safety.

Q: You’ve talked about the current state of playgrounds: that they’ve become so safe, they bore kids to tears. What’s wrong with them?

A: What we look at in a play space is what we call affordances for play. When you put a piece of fixed equipment in a playground, the affordances are very limited, and they become even more limited when supervising adults get in the way and tell you, “You can’t climb up the slide; you have to slide down. And you have to slide down on your butt.” But they’re really limited, because they are fixed structures. What’s really important in playgrounds is to provide malleable materials that kids can manipulate. One of the best ways to do that is by incorporating natural materials: trees, sticks, bushes, water, sand. If you look at a tree, it affords climbing. It affords sitting in. It affords using the branches for forts. It affords using the leaves for other games. It affords shade, or putting in a treehouse.

A: Exactly. If you ask people: What was your favourite place to play as a kid? I’ve done this time and time again; it’s the very rare person who will talk about a playground. So why are we building play spaces for kids that don’t actually reflect—one, what they like to do, and, two, what child development and health tells us is best for them?

A: I don’t want to give the impression that the only good or meritorious play is physically active play. Kids need all sorts of play for development. It doesn’t have to just be running around. Sometimes kids want to sit and read and draw, or play a video game. That’s okay. They need that time.

Q: How will this next generation of coddled kids be as parents?

A: From the research I’ve seen, this move toward hyperparenting started in the late 1980s, early ’90s. Those kids are university age and beyond, so they’re starting to have their own kids. They’ve had college students report on how they were parented. Reporting that you were hyperparented was associated with higher rates of anxiety and depression. Regarding what kinds of parents they will be? I do a lot of workshops, and where I start out is: Tell me about your play memory. With this younger generation, I’m starting to get more of, “It was on a playground,” or it was a supervised activity. They don’t have a frame of reference for that free-range experience that older generations had. If you don’t have that reference, you don’t understand what you were missing out on. It’s going to be a lot harder to understand why it’s so important.