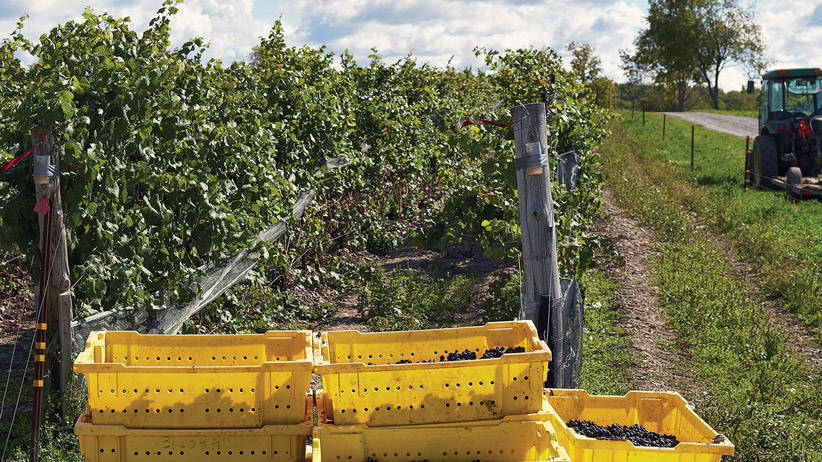 The first rumblings about a new wine region began around a decade ago. At the time, I had never heard of Prince Edward County, let alone considered it the next greatest place to grow grapes. But there were whispers of limestone, lots of limestone. Holes had been dug and soil analyzed. A promising land had been found a couple of hours east of Toronto on what is almost an island surrounded by the Bay of Quinte and Lake Ontario.

At the time there was nothing to go on. One estate, Waupoos, had planted a few winter-hardy hybrid grapes, but the wines stirred no excitement. There were a few experimental pinot noir vines in the ground, but production was negligible, counted by the bottle, not the case. Considering the cold climate, it seemed a less likely source of fine wine than Niagara in the mid-’70s.

A few intrepid souls made their way to the county (as it’s known to locals) and planted a few more vines. Land was cheap, but there was no dramatic investment, no burgundy or champagne houses sniffing about; growth was organic. It attracted wine lovers, fringe winemakers and minimally funded speculators prospecting for great wine, not expecting a rapid return on investment.

Locals began to sense something was up. Natives like Caroline Granger and Lanny Huff returned to family farms and planted vines to make wine. Funds were cobbled together, angel investment sources tapped, the occasional partnership struck between wide-eyed but impecunious wine growers and well-heeled, wine-loving businessmen. Old barns and sheds were converted, and a few modest wineries constructed to blend in with the low-key surroundings.

Since P.E.C. was granted official Vintners Quality Alliance status in 2007, it has quietly grown into Canada’s third-largest wine region with close to 40 wineries, many with little more than a shingle at the end of the drive. Napa Valley this is not, nor even Niagara; the county retains its sense of rural quaintness, a frontier land of promise, more artsy than glitzy. This will inevitably change, for the county is well on its way to being Canada’s, if not North America’s, premier spot for riveting, limestone-tinged wines.

With a growing season a month or two shorter than Niagara’s, early-ripening varieties are imperative. Chardonnay and pinot noir have robustly proved their suitability, and there are also eloquent arguments for cabernet franc, riesling and pinot gris, as well as less fashionable grapes like melon de bourgogne and gamay. To plant later-ripening grapes such as cabernet sauvignon and merlot is either market-driven thinking or quixotic folly.

What I find most striking is that even questionable operations (not all homespun wineries are sufficiently equipped with know-how and materials) manage to produce wines that are intriguing, if not downright compelling, quirky flavours and all. It’s as if the land speaks more loudly than the maker.

The secret is in the dirt, what geologists call the Trenton limestone plateau—the fractured remnants of an ancient seabed formed by billions of fossilized shelled creatures—on which the county sits. It gives wines an unmistakable minerality that wine lovers find irresistible.

It doesn’t come easily, however. Heroic efforts are necessary in Ontario’s coolest appellation. Vines, for example, are routinely buried each autumn under a layer of soil to protect the next year’s crop from winter’s bite. In the spring, the vines are painstakingly unhilled by hand to avoid damage by tractors. The top wines are costly to produce.

Yet wherever grapes struggle to ripen and demand meticulous care, unique and compelling wines emerge. Champagne, Chablis, Sancerre, Sonoma Coast and Mosel, for example, are on the fringe climatically for the grapes they specialize in. And as county vines sink their roots deeper into the limestone, and winemakers learn to contend with the climate, the wines should get even more exciting.

A word to the wise: look for “VQA Prince Edward County” on a wine’s label to ensure it’s 100 per cent county fruit. Many county wineries supplement their crops with grapes from Niagara to make the business viable. If a wine is VQA Ontario, you may only be getting a mouthful of that county limestone.