Are boys even meaner than 'mean girls'?

Author of a study on relational aggression, found boys use tactics such as rumours and social exclusion to hurt others more often than their female counterparts 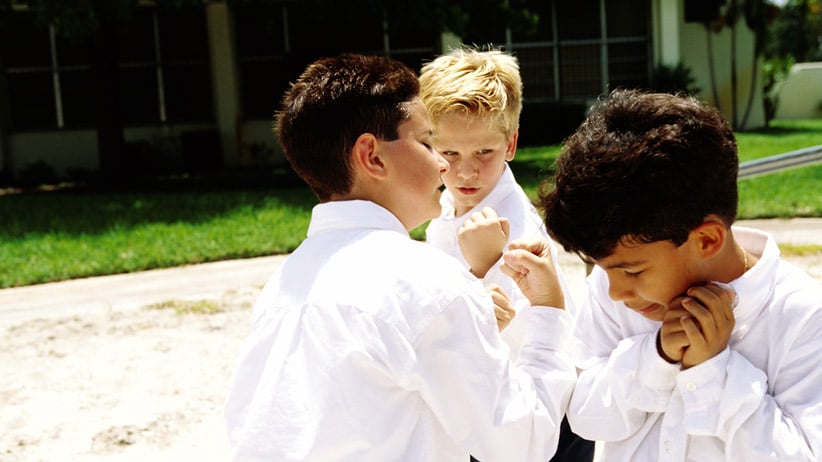 Over a decade ago, Rachel McAdams’s role as Regina George in Mean Girls brought female bullying to the forefront of social consciousness. Mean girls seemed to mostly gossip, backstab and reject others. But, according to a 2014 study from the University of Georgia, it is in fact boys who use tactics such as rumours and social exclusion to hurt others more often than their female counterparts. Mean boys? Maybe.

We spoke with Pamela Orpinas, the lead author on the seven-year study published in the journal Aggressive Behavior looking at trajectories in relational aggression from grades 6 through 12 for both males and females.

You use the term relational aggression. What are the different types of aggression?

Physical aggression, that’s hitting, punching, scratching someone. Verbal aggression, saying mean things to other people. But relational aggression is damaging the relationships among people. Damaging the reputation of others. It doesn’t have to be directly said to the victim. It can be indirect.

What are some examples of relational aggression?

Passing a rumour, posting a demeaning picture of someone on the web. Suppose that all the colleagues in your office have a party but they don’t invite you. They invite everyone else, but not you. Or someone starts saying something mean about you behind your back, but you start hearing that people are talking about you. As adults, we care less about it. But when you’re in sixth grade, seventh grade and someone is saying, “this guy is gay” or “this girl is a whore,” or “if you play with him, I’m not going to be your friend anymore,” that’s the kind of behaviour that can be really devastating for kids.

What did you expect to find when you started this survey?

Popular culture frequently says that girls are more relationally aggressive than boys. We have books and there are movies. There’s a lot of qualitative research about girls.

There have been two large [academic] meta-analyses and both found no difference between boys and girls in self-reported relational aggression, so we really expected to find no difference.

And what did you find in your study?

At every grade level for perpetration, the boys’ scores are higher than girls’. Now we found something different for victimization and there haven’t been any studies on this part, and that is that girls report more victimization.

How can that be?

We don’t know exactly. We have some hypotheses: girls are more sensitive to fairness, reciprocity and the importance of social relationships. A girl who is left out from a party might feel really bad, but a guy might say, “bah, I don’ care.” That’s one hypothesis. We don’t know whether that’s true or not. We do know that all kids do care about fitting in, having power, being popular, being liked by others.

Are there any other potential explanations for why girls report higher victimization?

The quality of the victimization might be different. For example, they say girls may be gossiping about dating and relationships. They might be gossiping about ways of controlling others. Depending on the status of the perpetrator, if someone is bullied by the boss or someone of high social status, it’s very different. All these different things play some role in how people perceive relationships. We didn’t collect any data on the gender of the perpetrator. That would have been interesting.

If girls are gossiping, what are boys doing?

We had the same questions for boys and girls. We have the same behaviour in boys and girls, like passing rumours, not letting a kid be in the group, saying things about someone to make other kids laugh.

And boys do this more than girls?

On average, for the six behaviours that we examined, every year boys reported more than girls.

Did that surprise you?

It did surprise me because most of the cross-sectional studies have shown similarities in boys and girls.

Your study was over the course of seven years. What did you find as boys and girls grew older? How did the data change?

Almost every kid reported some aggression—over 90 per cent—at some point in the seven years. So it is a fairly common behaviour.

In the past decade a lot of studies and anti-bullying programs have focused on girls. What effect does this have?

Given the numerous anti-bullying initiatives, did you notice your numbers change over the years as a result?

We don’t have that many longitudinal studies that can examine those changes. Now there’s so much more consciousness about the problem. I don’t think any school would say now, “boys will be boys.”

Canada has done a lot of really cool things with bully prevention, such as Pink Shirt Day. That was a really great thing they did. They just stood up for kids who shouldn’t be bullied.

What did you think of the movie Mean Girls?

I think it’s a little stereotypical. Some girls are mean. Most girls are not. They don’t want to be in this type of soap opera.

It’s been over 10 years since that movie’s release. How has media and pop culture evolved with the idea of “mean boys” and “mean girls”?

There’s a book now on mean boys, but I would love to see a book about positive boys and positive girls. There are some really fascinating stories about kids doing the right thing, supporting each other, saying, “Yes, you can do it!” Getting to the kid who is left out and supporting that child. I would love to see more of that, creating a norm, that being positive and supportive is the cool thing to do.

So when you hear the term “mean girl,” what goes through your mind?

It’s a biased assessment. I think there are mean girls, no doubt about it. There are mean boys too. And there are kids who are just fantastic who are not mean to each other. I don’t think we should typify girls as mean and boys as physically aggressive only. We should understand that this behaviour depends on the context. There are even more boys and girls who are very nice, positive and caring. It just doesn’t quite sell to talk about the positive.

This interview was edited and condensed for clarity.