The race to go rat-free 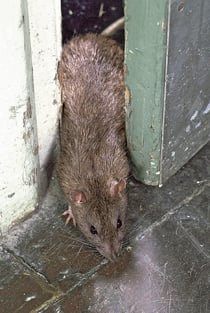 From time immemorial, humankind has been bothered by rats. They gnaw on energy cables, scratch through walls, spread disease, devour and desecrate agricultural goods and decimate endangered species—not to mention the constant urinating and defecating. Recently in a suburb of Johannesburg, an elderly woman died in hospital after rats chewed her eyelids. “They bite our children and leave them scared for life,” local resident Sheila Hlavangwani told the Look Local news agency. “Even our cats are afraid of them.”

For governments and organizations across the globe, enough is enough. From Dubai to the Haida Gwaii, South Africa to Saskatchewan, eradication campaigns are under way to beat back rat infestations. The battle lines are drawn across geography, ranging from remote unpopulated islands to bustling urban centres like Copenhagen, where officials promise the city will be rat-free by 2015.

Gregg Howald, North American regional director of California-based Island Conservation, works to eradicate the rodents from far-flung islands. “Eradication is a tool for something bigger, which is preventing extinctions,” says Howald, who has participated in over 20 rat eradications on islands all over the world. “You’ll see distribution of rats from subarctic conditions and subantarctic conditions all the way through to the deep tropics,” he says. “They can survive on virtually anything that has any degree of protein and nutrition.”

For centuries, rats have hitched rides on merchant ships and exploration vessels, scuttling around below deck until the boat makes land, says Howald. Once rats are introduced on remote islands, “there’s virtually a smorgasbord presented to them,” since birds and other island species aren’t accustomed to such versatile and resilient predators, Howald explains. Typically, he says, rats drag the carcasses of birds into their underground burrows, where they rip open their skulls to feast on their brains and eyeballs. Thanks to situations like this, rats are implicated in roughly half the world’s extinctions, Howald says. “That’s a staggering number.”

In an eradication campaign currently underway on two islands in British Columbia’s Haida Gwaii archipelago, Parks Canada is using shoebox-like traps full of poison-laced bait to attract and kill rats that are pillaging birds’ nests in the area. Elsewhere, like on Anacapa Island off the coast of southern California, rat eradicators have dropped poisonous bait from helicopters. As Howald explains, such initiatives can be highly successful. Ten years after Anacapa’s rat population was destroyed, “critically endangered” migratory birds have turned up to breed, says Howald. “This can be very rewarding.”

Grant Singleton, coordinator for the Integrated Rice Research Consortium (IRRC), knows that rat infestations in Southeast Asia can wipe out large swaths of agricultural goods, leading to a loss of income for farmers and a reduced food supply for the wider region. Across Asia, rats regularly destroy at least 10 per cent of a farmer’s rice crop, says Singleton. In February, rats “invaded” eight villages in the Philippines, devouring hundreds of hectares of corn, cocoa, coffee and rice. This prompted local authorities to declare a “state of calamity,” according to the IRRC website. Singleton says such sudden infestations are common in rural areas: since 2007, surges of rats have decimated produce in regions of India, Bangladesh, Myanmar and Laos. “Too often these losses are tolerated because farmers think that rats are too intelligent. But this need not be the case,” Singleton said in an email to Maclean’s.

To help, Singleton and his team have developed Community Trap Barrier Systems. These consist of large plastic fences complete with rat traps that surround a “lure crop,” which is planted two to three weeks before the rest of a field. When rats try to enter through the barrier, they’re caught in the fence’s traps, after which they’re either killed or, oddly enough, sold (rat meat is eaten in many parts of Southeast Asia). Because the females give birth to as many as 18 rats every three weeks, such trapping can significantly slow population growth.

Rat infestations are also a problem in urban areas, particularly when it comes to the spread of disease. As Singleton points out, rats carry a long list of dangerous ailments, including bubonic plague and leptospirosis, which can induce liver failure and kidney damage.

Although the complete eradication of rats from urban areas is an elusive goal, cities and regions have had success. Budapest, for example, has claimed to be effectively rat-free since 1972. But perhaps no place has been more successful than Alberta, which has boasted an absence of rats for over 50 years. Only 12 to 18 rats turn up each year in the province, says Phil Merrill, a veteran of the province’s rat patrol. Based on this long-term triumph over the persistent vermin, Merrill offers hope to all would-be rat eradicators: “They’re a parasite of man,” he explains. “They can be controlled.”