By the age of three, he was riding on a moped. He had a passion for motorcycles and only as a doting father did he buy a car. 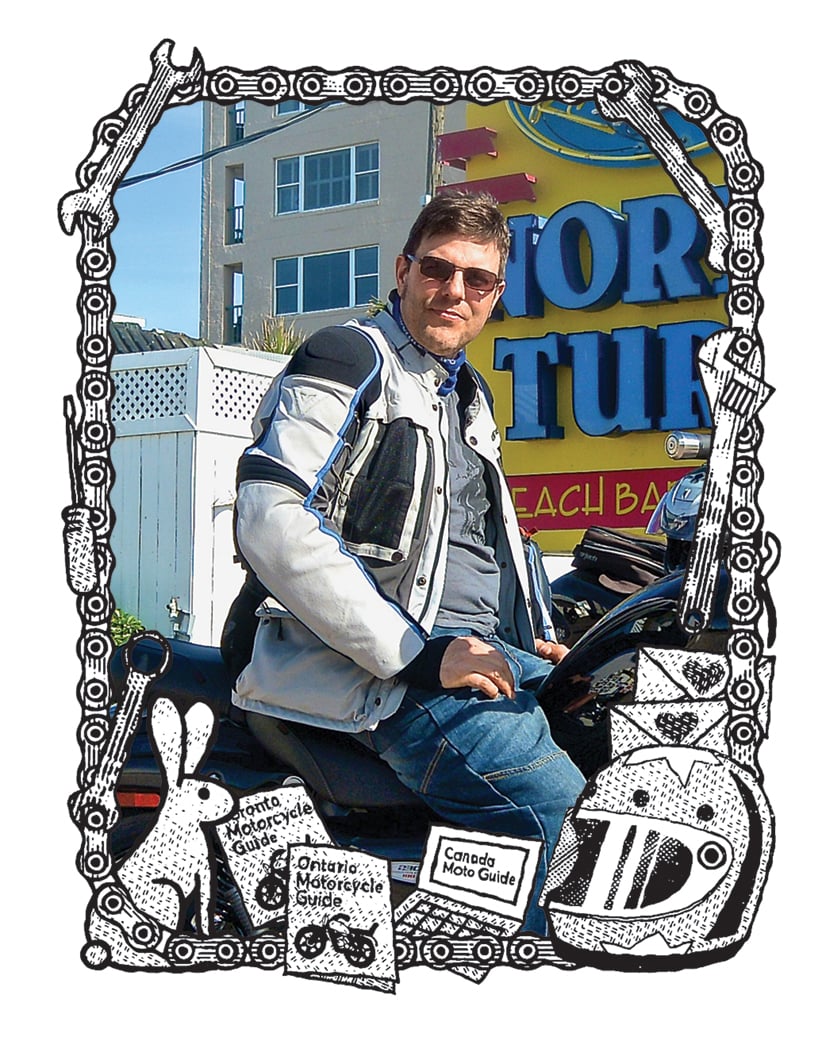 Robert James Harris was born Jan. 15, 1967, in Harrogate, U.K., the youngest of three kids to Janet, a social worker, and Donald, an urban planning inspector. Growing up in north Yorkshire, Rob was three years old when his mom bought a moped. “We used to be a little bit jealous of him because mom used to take him on the back of a moped everywhere and we had to walk,” says his sister, Sarah.

Three years later, Janet died of breast cancer and the family struggled to cope. In the summers, Donald would rent a cottage where the kids could explore nature while he commuted back to the city for work. Rob and his siblings stuck together, spending time exploring the hillside or sailing down the nearby rapids on a dinghy. Sometimes Rob and his brother, Michael, would go out hunting for rabbits with a stick. “We’d sell them to the local butchers for a pence,” Michael says. “That was good income for our pocket money.” But it was also quite gruesome work. By high school, Rob was a vegetarian.

At 17, Rob inherited some money from his grandfather and travelled to Australia. Upon his return home, he enrolled in a motorcycle mechanics program and studied mechanical engineering at Coventry University. But when he couldn’t find steady work locally, he came to Canada. He got a job at a motorcycle shop in Toronto. In his early 20s, he fell in love with a Canadian and they got married, but the relationship fell apart after a few years.

Rob found motorbike mechanic work too repetitive. But his passion for motorcycles never waned and so he started Toronto Motorcycle Guide, soon renamed Ontario Motorcycle Guide. By 1996, Rob had expanded his audience with the online magazine Canada Moto Guide. In the early 2000s, he moved to Montreal and he’d travel often to cover various motorcycle rallies for the magazine. Work sometimes involved staying several nights at a friend’s place, where “he’d take off his size 14 shoes and leave them right in front of the door,” says his close friend Jim Vernon. “When he was staying with you, you knew because his stuff would be everywhere.”

On June 4, 2005, Rob was at a rally in Montreal when he met Courtney Hay, a volunteer at the registration desk. At the end of the day Rob rode into the parking lot “and skidded to a stop on his bike two feet in front of me,” says Courtney. “It was either crazy or brilliant.” After a long chat, she asked for his email.

Though Courtney had a good government job in Ottawa, it took her less than a year to ask for a transfer to Montreal so she could live with Rob. In 2007, they went on vacation to Mexico, where one night, while Courtney was in the shower, Rob went down to the lobby and bought a ring. That night on the beach, he dropped to one knee. They never set a wedding date, as later that year they welcomed a baby girl, Cate. Two years later, they had a second girl, Chloe. Wanting to live somewhere with more green space than Montreal, they moved to Sackville, N.B. in 2009.

A doting father, Rob took the girls on long hikes and they gardened in the backyard. He always preferrred to travel on two wheels, but with two kids realized the family needed a car. “He very reluctantly—and begrudgingly—bought a Kia Rondo,” Courtney laughs. While organizing motorcycle rallies, when it came time to show riders a map of the various routes and their degree of difficulty, Rob marked the easiest path with a photo of his Kia Rondo.Though he liked to joke around, Rob was very safety-conscious on his bike­—he often insisted he ride in front with friends. In 2011, prior to a three-week motorcycle trip across Europe, he wrote a letter for his two daughters only to be opened in the event of a fatal accident.

Rob and Courtney struggled to balance family, work and riding. Courtney eventually quit her job so that she could be next to Rob full-time at the magazine. They were also creating a motorcycle adventure rally of their own. In 2014—with each daughter by his side—Rob dropped to a knee, this time holding his mother’s wedding ring, and proposed once again.

On May 14, Rob was riding a motorcycle on a trip through Ontario when, while passing through the town of Wollaston, he collided head-on with a truck and was killed. He was 49. His daughters opened the letters Rob wrote five years prior. It began: “My dearest Cate,” and “My dearest Chloe, I am so sorry that you are reading this now. It means that something has happened and that I shall not be seeing you again.”