With a deeply personal essay about grieving her husband's death, the Facebook COO reframes a fundamental human experience 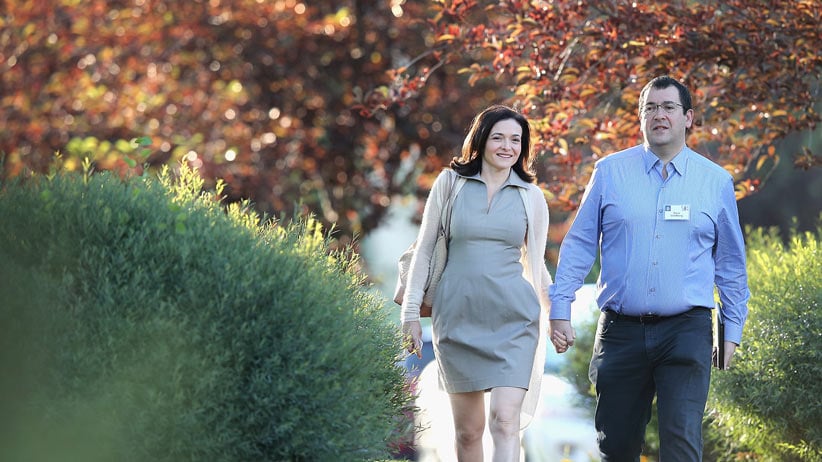 In the novel H is for Hawk, Helen Macdonald memorably wrote that “Grief is just love with nowhere to go.” On Wednesday, Facebook COO Sheryl Sandberg defied that sentiment in a powerful, moving Facebook post written a month after the sudden death of her husband, Dave Goldberg, a Silicon Valley entrepreneur.

Writing after the 30-day Judaic mourning period for a spouse, the social-media executive shares how profound grief—and her love for her husband—has given her somewhere to go: to a place of new engagement with and gratitude for life. “I think when tragedy occurs, it presents a choice,” she writes. “You can give in to the void, the emptiness that fills your heart, your lungs, constricts your ability to think or even breathe. Or you can try to find meaning.” That meaning, she has learned, comes from “giving back” and appreciating every moment, she writes, before eloquently backing up what could otherwise be mere platitudes.

Sandberg, the author of the blockbuster Lean In: Women, Work and the Will to Lead, which exhorts women to engage more fully in their work lives, is famed for approaching life positively and instructively. With yesterday’s post, however, she elevates the “Lean In” mantra to a cosmic level, one destined to appeal to a far wider audience, including anyone who is experiencing, or has ever experienced, great sorrow themselves.  Coping with the complex and singular process of grieving is little discussed in a culture that dispatches grief counsellors to mop up tragedy’s aftermath, and recently medicalized grief itself as a psychiatric condition. Small wonder, then that the post had  close to 700,000 “likes” and been shared more than 300,000 times by noon today. Already predictions are flying that it will open up discussions of grief, just as Lean In sparked widespread conversation about female ambition and work-family balance.

Sandberg addresses her fast-tracking of Elizabeth Kübler-Ross’s famous five stages of grief: “I have lived thirty years in these thirty days. I am thirty years sadder,” she writes. “I feel like I am thirty years wiser.” That wisdom brought “[r]eal gratitude for the things I took for granted before—like life. As heartbroken as I am, I look at my children each day and rejoice that they are alive.” The loss of her husband brought new connections with friends and even strangers who opened their hearts and shared their experiences, Sandler writes. And seeing the pain in her own mother’s eyes provided new insights into being a mother. She writes of learning to ask for help, and shares tips on how resilience can be learned. There are practical lessons in her essay. Addressing the social awkwardness that comes at times of tragedy, Sandberg tells people not to ask “How are you?” Ask them, “How are you, today?” instead, she writes, because they are coping one day at a time. And in an indictment of modern driver insensitivity, she begs us to yield way to an ambulance, recalling the “unbearably slow” trip to the hospital after her husband’s heart attack.

Quick fixes don’t exist, she writes; “many future moments will be consumed by the vast emptiness.” But true to her “Lean In” public persona, Sandler ends on a positive note. She will not be defeated by the loss of her “option A,” she writes, promising to honour her husband’s spirit moving ahead.  “I can still kick the shit out of option B,” she promises, delivering a grief-coping mantra for the 21st century—one that’s brave, badass, and destined to resonate with the millions who never had a “option A” to begin with.