As patents expire, companies are desperate to reclaim their monopoly on your pricey morning brew 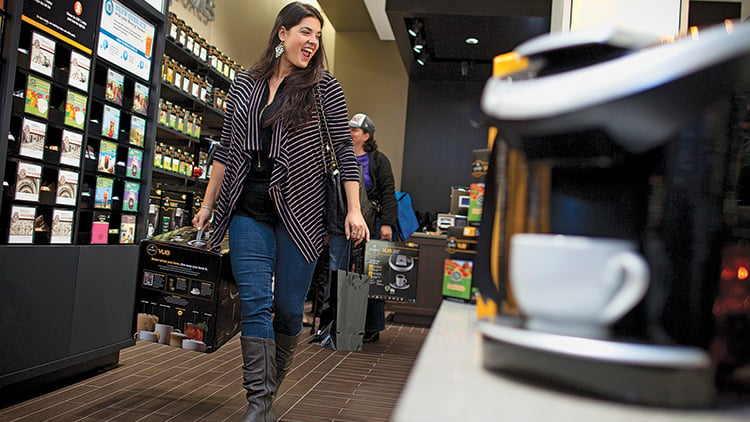 But critics say the “intelligent extraction” technology, in which each coffee pod has a bar code, is in fact a clever, or ruthless, way to protect what’s been a stranglehold on the booming market for single-serve coffee pods, which were protected by patents. Until recently, owners of single-serve machines were forced to buy their coffee from Nespresso or, in the case of rival Green Mountain Coffee Roasters, maker of the popular Keurig machines, from one of its dozens of licensed suppliers. But those patents have been expiring, and now a battle is under way to win back their dominance.

For instance, Green Mountain is rolling out radio-frequency identification technology for its K-Cups that will effectively prevent its newest machines from brewing unlicensed packs. “No monopoly likes to lose their monopoly power,” says Gene Kakaulin, the CEO and co-founder of New York-based HiLine Coffee Co., which began selling Nespresso-compatible pods last July. “If I was in their position, I would probably do the same thing.”

The dawn of a new round in the pod wars demonstrates just how valuable the single-serve business has become. U.S. sales of pods tripled to $3.1 billion between 2011 and 2013, according to data from Mintel Group. In Canada, market research firm NPD Group says nearly half of all coffee makers sold are of the single-serve variety, while Demont says coffee-pods here are now a $725-million-a-year business.

For years, Nespresso, Green Mountain and others like Kraft’s Tassimo had the market to themselves. They tapped appliance-makers to build and sell the machines, secure in the knowledge they’d make far more money selling their proprietary pods to a captive audience over the life of the appliance—a business model often compared to printer cartridges and razor blades. Despite mind-boggling mark-ups—as much as double or triple the price of a bag of roasted beans from Starbucks or the local supermarket—consumers gravitated to the format. It promised more convenience, improved consistency and fewer half-pots of stale brew poured down the sink.

But cracks began to appear when Green Mountain’s patent on its K-Cups expired in 2012, opening up its machines to unlicensed coffee suppliers. The same thing has now happened to Nespresso, which has lost several court battles aimed at preventing cheaper, third-party pods, like those made by HiLine, from finding their way into its machines. (Kakaulin says he got the idea after running out of Nespresso pods one day, forcing him to fashion his own out of a spent capsule and a piece of tin foil.) In general, Kakaulin says, the courts have viewed single-serve coffee makers the same way they view regular drip ones, meaning consumers should be entitled to fill it with whatever they want.

With the barbarians at the gate, both Nespresso and Green Mountain are scrambling to introduce new technologies to their platforms that will be eligible for patent protection. Green Mountain CEO Brian Kelley confirmed on a recent conference call the company’s upcoming Keurig 2.0 brewing system will not accept unlicensed pods because of new “interactive technology to help us perfectly brew all Keurig brew packs.” Green Mountain has argued such technology is necessary because future Keurig machines will brew both larger amounts of coffee (including, oddly enough, a full-sized pot—just like a regular drip coffee maker that can be purchased for as little as $20 at Wal-Mart) and a slew of non-coffee beverages. A new cold brew system, for example, will pump out flavoured waters, energy drinks and pop. The ploy has drawn the interest of Coca-Cola, which recently purchased a 10 per cent stake in Green Mountain for US$1.3 billion. Keurig has also inked a partnership with Campbell’s to develop K-Cup packs that will make soup.

While Demont claims Nespresso’s new VertuoLine system will have “patent protection until 2030,” he notes the machine will only be sold in North America and that the company is banking on its strong brand and reputation for customer service (Nespresso capsules are sold only in swanky boutiques or through an online “club”) to keep customers in the fold. There are no plans to start brewing non-coffee beverages, he said.

Kakaulin, for one, doubts either company’s gambit will work as planned. The former private-equity associate predicts the industry will ultimately go the way of the tech world, where the most successful firms are usually the ones that embrace third-party developers. “In time,” he says, “open systems tend to win over.”