Where everybody knows your name—because your name's Chewbacca

Theme bars hope that sometimes, you want to go where everyone dresses up 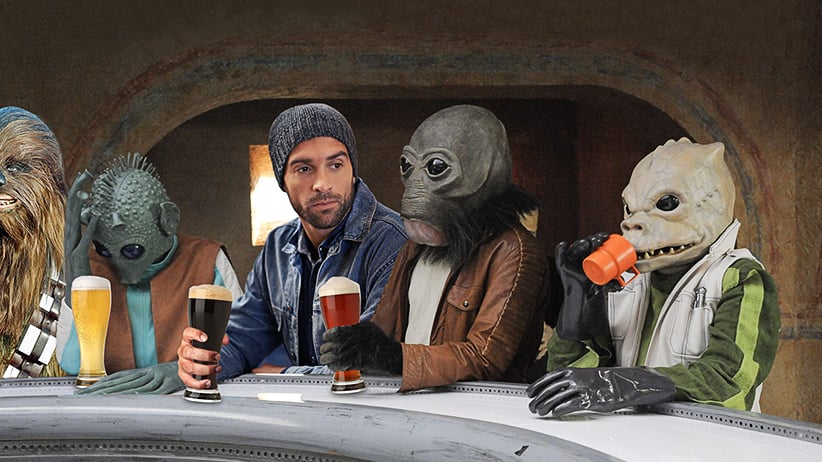 Darth Vader and Princess Leia walk into a bar. “Can we start a dart league?” asks the Dark Lord. It’s not a scene from the upcoming Star Wars: The Force Awakens; it’s just another day at the Cantina, a Star Wars–themed bar in suburban Ottawa. Named after the interstellar watering hole in the original 1977 Star Wars where Luke Skywalker and Ben Kenobi first meet Han Solo and the Wookiee Chewbacca, the Cantina’s walls are painted desert-brown to evoke the planet Tatooine. Patrons can order specialized cocktails like Bantha Milk, which isn’t the blue liquid of a bantha’s mammary glands, but rather a concoction of coconut rum, pineapple juice, milk and blue curaçao. The room is filled with movie memorabilia and, yes, some customers dress up on occasion.

“You go into a sports bar and you see Wayne Gretzky or Mario Lemieux signed [something]. The idea is the same,” says the Cantina’s co-owner Jeff St. Pierre. It’s an idea many are trying out: a bar inspired by an already well-established franchise. This summer, a Breaking Bad–themed pop-up cocktail bar opened in London, England. The Lockhart in Toronto made international headlines this year for its Harry Potter theme, where the wall of drinks says “Potions & Elixirs” and one cocktail is served from a cauldron. The Big Lebowski has such a cult following that, nearly two decades after the Coen Brothers’ film was first released, there are now three bars inspired by the movie, with the latest opening this month in San Antonio, Texas. (The other two are in Reykjavik and Berlin.) It advertises as “a place where White Russians are always on special, practising your bowling skills is a daily chore, and comments on how our rug really ties the room together fly frequently.”

When Zach Neil and Brian Link decided to open a bar in New York City, they wanted something different. “Everyone does the same thing,” says Neil. “It’s either the pretentious snob bar where everyone goes to have martinis and pretend they’re better than everyone else or you’ve got your sports bars where everyone’s crowding to have overpriced drinks around the television. And then you’ve got your standard New York pub.”

As the two were driving home from a potential property, Link cracked a line from Will Ferrell in Anchorman 2: “No offence, but you are a stupid asshole.” Then Neil said, “That’s it,” he recalls. “We should do a Will Ferrell–themed bar.”

Stay Classy New York received international media attention when it opened last month. The drinks menu includes, “Milk Was a Bad Choice,” “Great Odin’s Raven” and “You’re my Boy Blue!” When Blue Oyster Cult’s Don’t Fear the Reaper plays over the speakers, bartenders pull out the cowbells. On the night of an Anchorman-themed event, men dressed as Ron Burgundy lined up around the block. Every Ferrell movie offers a different theme-night opportunity, so long as the owners carefully avoid copyright infringement. After all, they didn’t ask for Will Ferrell’s permission.

They were told they couldn’t use Ferrell’s name in any promotion or sell anything with his name on it. And it turns out that Paramount Pictures is happy a bar is promoting films more than a decade old. Ferrell even sent them DVDs and suntan lotion, to be auctioned off with the proceeds going to his charity, Cancer for College.

Not everyone is convinced the trend has legs. “They’re somewhat gimmicky,” says John Greene, a bar consultant and host of the Food Network’s On the Rocks. “A Harry Potter bar sounds kind of cool, but how often are you going to go there in a year?” It might survive in touristy cities like New York or Toronto because of the sheer volume of people, says Vancouver-based bar consultant Shaun Layton, but it’s tough anywhere else. “You don’t want [a bar] to be a special-location place,” he says. “You want it to be a place people want to go to two or three times a week.”

Which is why St. Pierre is trying to strike a balance. “If anybody heard, ‘Let’s go down to the Cantina,’ they’d just think it’s a bar,” St. Pierre says. His bartenders aren’t dressed up like Chewbacca. On a regular day, it looks like any other bar, but with more Star Wars kitsch on the walls—and, at times, some peculiar-looking darts players.

Correction: A previous version of this story suggested that Luke Skywalker first meets Ben Kenobi in the Mos Eisley Cantina. The pair had in fact already met by that point in the film, and instead first meet Han Solo and Chewbacca in the Cantina. These are not the errors you are looking for.