Newsmakers who left the stage in 2013

After five seasons of meth and murder, fans bid farewell to Breaking Bad’s Walter White, the most captivating anti-hero since Tony Soprano. The AMC drama’s series finale went out on a high note, garnering almost universal praise from critics, and scoring a record 10.3 million viewers—up 442 per cent from the fourth season finale. Addictions form fast.

After being forced out of office in a military coup in July, the deposed Egyptian president is now charged with inciting the killing of protesters, and faces the death penalty. Proving he’s the Lindsay Lohan of the Middle East—at least when it comes to causing a scene in a courtroom—Morsi spent the first day of his trial yelling, pleading and causing general chaos. Yet that didn’t stop him from insisting he was still in charge of the country, begging the court to try the “coup leaders” instead and working supporters into such a frenzy that someone threw a shoe. After only three hours, the trial was adjourned till next year.

During his time in Ottawa, the governor of the Bank of Canada was regarded as a strong and sensible voice of reason, steering the central bank to a place of “unity and cohesion” during his five-year governorship. Maybe if we treated him like the star the British press so clearly thinks he is, the Bank of England wouldn’t have snatched him away. Instead, Carney was lured to London this June, and has since been compared by U.K. pundits to both Don Draper and Ryan Gosling. Just wait until we ship dreamboat Stephen Poloz over there in 2018.

Matt Lauer: evil mastermind? That seemed to be the log line from this year’s TV morning-show wars, in which the Today host was cast by the press as conspirator-in-chief in the at-times maniacal plot to boot his co-anchor Curry from the NBC institution. Curry, a loyal network soldier who joined Today with much hype in 2011, seemed as surprised as anybody about the move, breaking into tears during her on-air farewell, with a visibly awkward Lauer shifting in his seat beside her. At least she landed on her feet, snagging a lucrative contract with NBC Nightly News, just as ABC’s Good Morning America surpassed Today in the ratings for the first time ever. 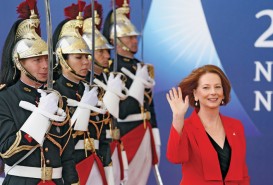 The former Australian PM’s path to the political spotlight was never an easy one. After forcing out her one-time boss, Kevin Rudd, Gillard endured a rocky three years in office plagued by party in-fighting and rampant sexism—the latter of which she deftly rebuked in a speech that went viral. Although Gillard lost the Labor leadership to a rebounding Rudd in June, perhaps she can take solace in the fact he, too, is now out of a job after losing September’s election to Tony Abbott.

Before the “cronut burger” was even a twinkle in some toxicologist’s eye, Wendy’s T. Rex burger seduced the world with its caloric excess. Alas, the nine-patty concoction—which, like many fast-food offerings these days, started as a joke a few years ago—was taken off the menu of a Wendy’s outlet in Brandon, Man., this June before it could cause a single heart attack. Somehow, Wendy’s customers will have to get their 3,000-calorie fix elsewhere on the menu.

Between disastrous earnings reports, bumbled product launches and hungry competitors, Thorsten Heins barely stood a chance when he took the helm at BlackBerry a mere 22 months ago. Don’t feel too bad for the ousted CEO—he may still walk away with $15 million. Fortunately, “creative director” Alicia Keys is staying on to keep the company afloat—if she can just learn to stop tweeting from her iPhone.

With cricket being a near-religious experience in India, it’s only natural the game’s biggest star would attain god-like status. But how to say farewell to a deity? That was the dilemma Tendulkar’s fans faced in November, as he announced his retirement after 24 years in the field. As the diminutive batsman stepped out for his final game, millions stopped what they were doing to watch, with schoolchildren donning Tendulkar masks and fans in Gujarat riding elephants across the streets in his honour. 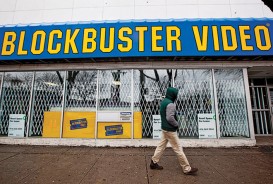 While the rise of Netflix and other online services is largely to blame for Blockbuster’s demise, the once-dominant video chain was its own worst enemy, routinely overstocking new titles and refusing to carry controversial films. Twenty-eight years after the company’s founding, owner Dish Network finally rolled the end credits, shedding 2,800 staff in the process. Fittingly, the final film rented was This Is the End.

With five world championships, seven league titles and 12 division crowns, Yankees pitcher Mariano Rivera is one of the greatest players in baseball history. And when stacked next to current MLB villains like Alex Rodriguez—who took a less dignified break from the MLB this season thanks to a league-enforced suspension over his alleged use of performance-enhancing drugs—Rivera achieves something close to unicorn-like status. The 43-year-old received a hero’s send-off when he retired this September, with New York City Mayor Michael Bloomberg declaring a “Mariano Rivera Day,” and a star-studded ceremony at Yankee Stadium honouring “the closer.”

To keep its communiqués on the quieter side, the U.S. Navy finally ditched its all-capitalized messages, which had the annoying tendency to appear as if officers were SHOUTING ALL THE TIME. The missives were a holdover of the Navy’s early teletype machines, which couldn’t produce lower-case letters.

Disappointing millions of tweens still too innocent to know of “twerking,” the clean-cut, Disney Channel-bred Jonas Brothers announced their plans to break up this October—as a band, not a family unit. “We feel like we’re best suited to do our own individual things,” Nick Jonas, clearly the John Lennon of the trio, told reporters.