Someone's in the kitchen with mommy 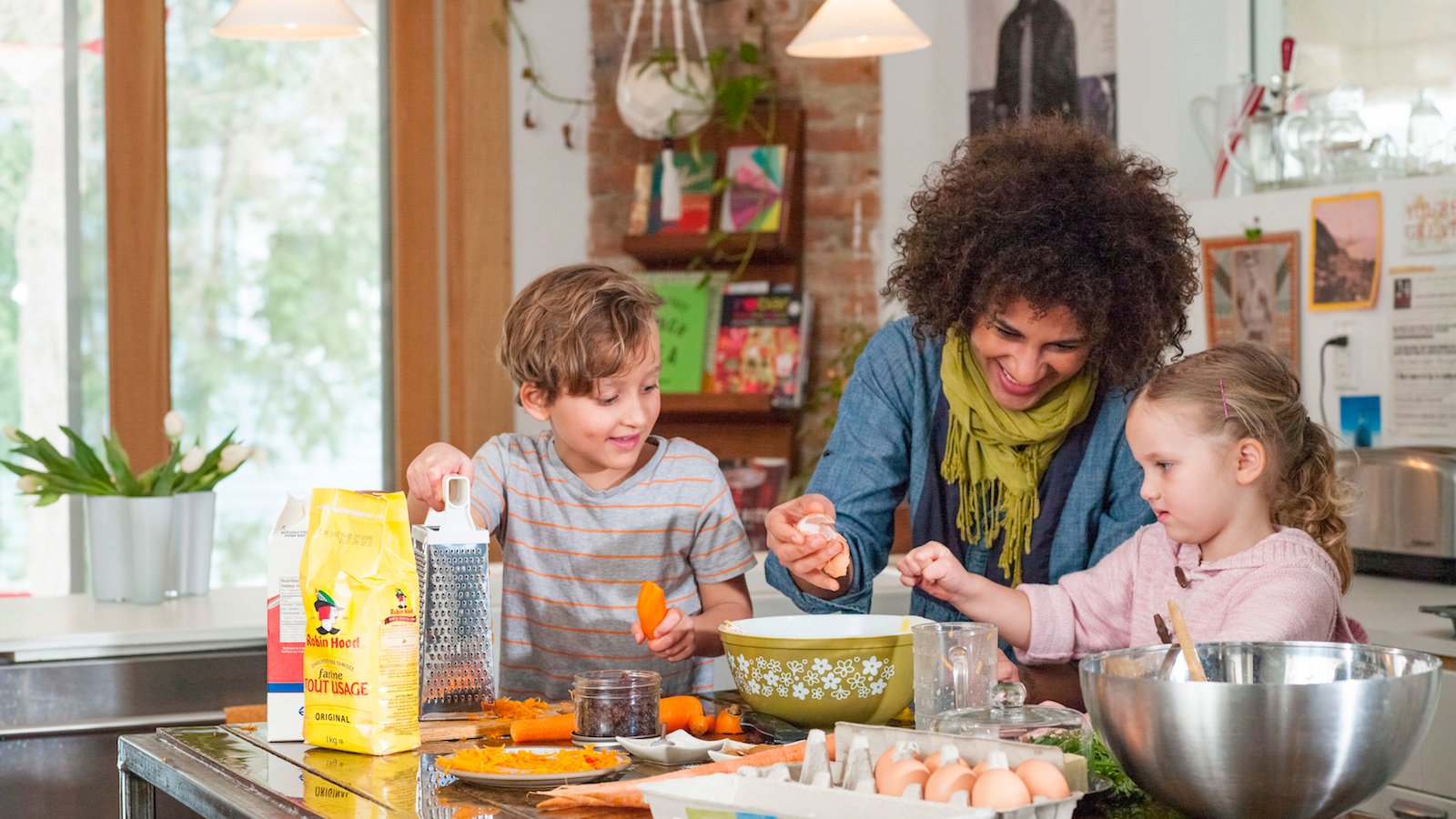 When Sarah Elton asked her two daughters, ages nine and six, what they wanted for dinner one recent night, the answer was unequivocal: “Vegetarian sushi!” Elton, a Toronto-based food journalist, was dismayed. “That’s not something we make all the time and it sounds really hard,” she recalls. But Elton had already told the girls they could do the cooking, having imagined they’d suggest a more familiar dish such as macaroni and cheese. So she retrieved a Japanese recipe book from the shelf and, in no time, her younger daughter had taken over: “She was insistent on making the rice herself, looking at the ratios, measuring—she wouldn’t even let me make sure she had it right!” Grains scattered. Elton held back. “I just tried to let go and hope it worked out,” she recalls. Eventually, “it did.”

It was a poignant home-cooking experience for Elton and her daughters, proof of how much children are capable of understanding and achieving in the kitchen when given the necessary information, tools and time. It’s a lesson that is paramount in Elton’s 2014 book, Starting from Scratch: What You Should Know about Food and Cooking. It was written for children with an appetite for culinary knowledge—sparked by celebrity chefs, foodie culture and the Food Network—whose parents may not have the skills or enthusiasm to teach them. “Fewer and fewer of us are cooking these days, so adults are disconnected from the pleasures, which means that their kids are disconnected,” says Elton. “This is an effort to engage with kids.”

But there’s nothing kiddie about the book. Among the many topics Elton covers over almost 100 illustrated pages are food history; techniques such as kneading, caramelizing and braising; and the components that create taste, including the concept of terroir, which holds that an animal’s diet or a region’s climate and soil affect flavour. When Elton first heard of terroir, she was in a Quebec dairy farmer’s field. “I felt my brain explode, like, ‘Oh my God, I can’t believe I’ve been eating cheese my whole life and I didn’t know that!’ ” she recalls. “I don’t like being an adult and finding out things that I think should have been told to me when I was seven.”

Elton’s refusal to dumb down cooking for kids has been driven by her experience at a French culinary school, where she spotted a row of chef’s knives—“those mean-looking [ones] that even I’m afraid to use,” recalls Elton—in a classroom used by children. “I said, ‘You don’t let the kids use those,’ and he said, ‘But of course! [When] they’re old enough—we wait until they’re six.’ ”

The book also tackles issues such as sustainability and fair trade, because “whether or not you know it, you are making a decision with political consequences every time you eat,” Elton says. That global thinking is evident in the range of cuisines she includes in the flavour appendix, which lists the herbs, fats, acids, veggies and other ingredients commonly used in Italian, Asian, Indian and Mexican cooking. In providing this foundation, Elton hopes to encourage creativity: “The deeper an understanding you have, the better your results when you experiment.”

In Starting from Scratch, Elton chose to feature only a few fundamental recipes that serve as reliable homemade alternatives to popular store-bought goods: pasta sauce, oatmeal cookies, lentil soup and granola. Indeed, kitchen basics are a big part of the book, which also outlines essential cooking tools, how to stock a pantry, convert measurements and make ingredient substitutions. “You want kids to be completely armed and ready,” says Elton, because knowing how to cook “serves you well as an individual. It’s a life skill. It prepares you for being an adult.”

Elton is thrilled her book has attracted a broader audience than intended: Parents have purchased it for their adolescent or grown children—one bought it for her 20-year-old daughter who couldn’t make Kraft Dinner—or even for themselves.

As for Elton’s cooking session at home, her six-year-old’s first attempt at using a chef’s knife to cut cucumber for the sushi was short-lived: “I [took] it away from her,” Elton admits. “I wasn’t comfortable with her cavalier use.”