Sophie Grégoire-What? It may be 2015, but not for political wives

How Teskey became Harper, Gregoire acquired a hyphenated add-on, and the strange case of surname morph in Canadian politics 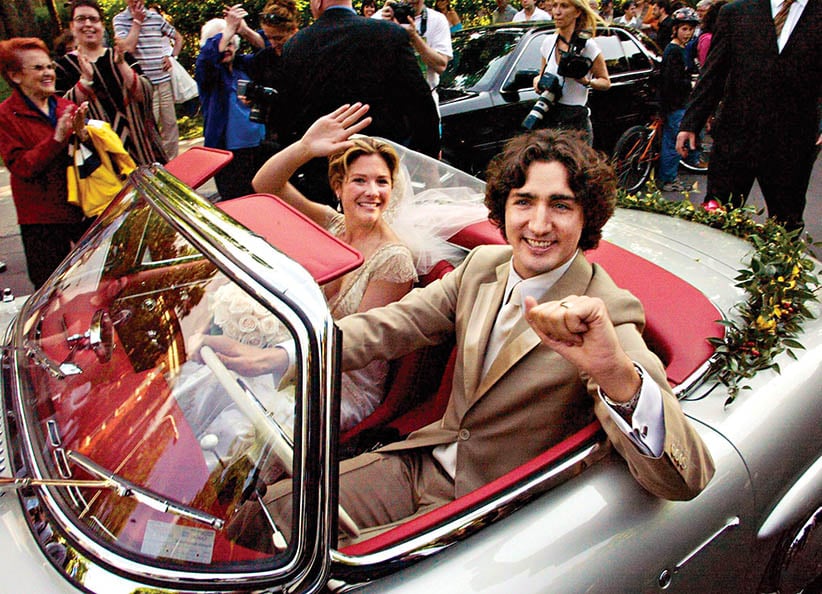 Justin Trudeau with his new bride  in his father’s 1959 Mercedes 300 SEL after their marriage ceremony in Montreal Saturday, May 28, 2005.(RYAN REMIORZ/CP)

“Because it’s 2015,” Canadian women have multiple choices when it comes to their post-marital surnames. They can keep the one they were born with—Quebec law since 1981 requires they do or go through a hassle to change it. They can take the surname of their husband or wife. They can hyphenate, a decision destined to wreak alphabetical havoc if children and children’s children carry on the tradition. They can choose to mesh their own names with their husbands like the British TV presenter Dawn Porter, who became Dawn O’Porter after she married actor Chris O’Dowd in 2012. They can even create a brand new composite last name to be shared with their spouses, a challenge that calls for Scrabble tiles and a bottle of wine.

Or, as the wives of federal political party leaders have recently indicated, there’s another option: the sudden surname-morph. That’s when women who kept their birth name for years, even decades, after marriage publicly assume (or tack on) their husband’s name at key political junctures. The most recent example is the wife of Canada’s first self-declared feminist prime minister: the former Sophie Grégoire who quietly transitioned into Sophie Grégoire-Trudeau. After the election, journalists who asked were told “Grégoire-Trudeau.” Surname-morph crosses all party lines: even “progressives” do it. We saw Catherine Pinhas, Tom Mulcair’s wife since 1976, become Catherine P. Mulcair—the P. remaining like a vestigial tail—after her husband became leader of the official Opposition. Most famously, the woman known as Laureen Teskey for years after her 1993 wedding to Stephen Harper was Laureen Harper the minute her husband was elected PM. To find a prime minister’s wife who didn’t assume part or all of her husband’s name, you have to go back more than 30 years to Maureen McTeer, the wife of Joe Clark. She still remains the exception.

“So what?” you might ask. After all, it’s 2015; women can go by whatever name they want—and change it whenever they want. But it appears some of our most high-profile women don’t have the same range of options, and that says something. Political strategists would tell you that adopting, or adding on, a political husband’s last name is simply good branding—that in a sound-bite culture, two names distract from the party line; one shared name signals unity. But is the electorate really too stupid to understand that spouses can have different names? Or that spouses with different names, the norm in many countries and cultures, are no less unified? And is there no value to a political brand—because it is 2015—in which a female partner is allowed separate billing and her own identity?

There are a host of reasons married women keep their birth names, even though the husband’s name is still typically passed on to children (because how otherwise would the world know who their father is?). Yet wives in the North American political arena, the very forum in which laws are enshrined and social policy is made, are expected to conform to more retrograde standards. There we see the last vestiges of coverture, the archaic French legal doctrine under which a wife became her husband’s property, subsumed into his identity.

The reason for it was evident in the furor surrounding McTeer. Joe Clark was ridiculed for not reigning over his own household: How can a man unable to control his wife possibly control the country? the thinking went. Decades later, Ottawa hasn’t recovered; the fallout influenced the Teskey morph to Harper, I learned when writing a profile of Laureen Harper for Maclean’s: “It was a complication they didn’t need,” a member of Harper’s inner circle at the time told me, clearly referring to the McTeer situation.

Canada likes to see itself as more progressive than the U.S., where every president’s wife has shared her husband’s surname. Hillary Clinton was slammed when she added Rodham, her birth name (or “maiden name,” a term that bristles with regressive imagery), in 1993. Our prime minister’s spouse has no official role, unlike the American first lady, who invariably ends up engaged in good works involving plants and children. Yet, barring the much-maligned McTeer, only spouses of leaders of the opposition have kept their birth names, among them Michael Ignatieff’s wife, Zsuzsanna Zsohar and Janine Kreiber, who is married to Stéphane Dion.

That makes Grégoire-Trudeau something of a trailblazer as a hyphenate, which spares her from being the “new Mrs. Trudeau,” as she was introduced on the cover of  Chatelaine’s October 2006 issue, a year after her marriage. The inside story, however, made it clear she went by Grégoire, not Trudeau, while taking a shot at her for doing so: “After they were married, Sophie held on to her surname, even though the mark she’s made with it professionally has been modest.” She was called “Madame Trudeau” from time to time, and that the name “weighs upon me in the good sense,” Grégoire said. “I feel flattered.”Given that the last name is a national institution, that’s understandable. But this was a woman who had the chance to take on that legendary name and said, “No, thanks, I’ll keep my own.”

And she did, for a while. Months after the story, which claimed Grégoire’s husband had no political aspirations, Trudeau won the party’s nomination in the Montreal riding of Papineau. The Grégoire-Trudeau morph began then, in 2007. Mentions were sporadic at first; even after Trudeau became Liberal leader, she remained Sophie Grégoire. But that slowly changed in the lead-up to the election. A “Meet Sophie” page on Liberal.ca posted in May that features a video of her talking about being a mother and reference to her advocacy work and interests, refers to her as Sophie Grégoire-Trudeau. And there were those post-election clarifications to media. Dan Louzan, a Liberal party spokesman, says, “Nothing has come out officially, to my knowledge, but when asked we always confirm: Sophie Grégoire-Trudeau.”

So far there’s been no suggestion that Justin Trudeau, who refers to his marriage as an “equal partnership” has taken a page from Jay Z (a.k.a. Shawn Carter) who made headlines when he added Beyoncé’s surname when they wed; he officially become Shawn Knowles-Carter, keeping final billing, so he and his wife shared the same name. If the prospect of Justin Grégoire-Trudeau seems preposterous, it’s worth asking why. After all, it’s 2015.