He was a talented hunter and hockey player. A natural father, he lived like he knew life was short. 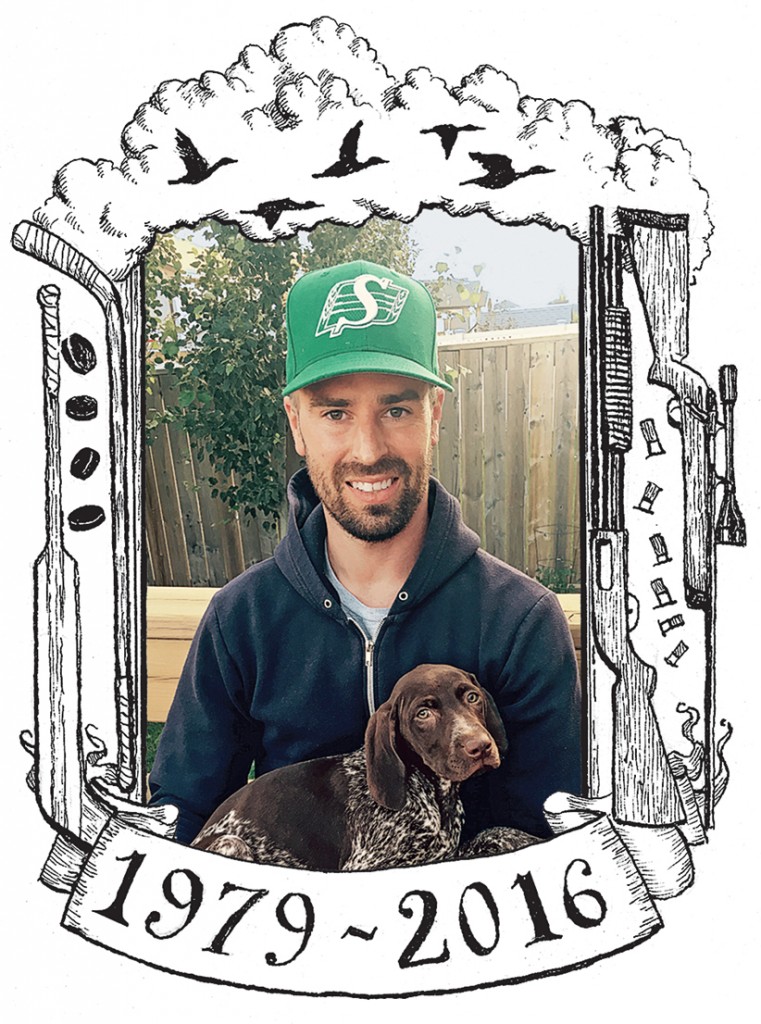 Brent and Gwen often took the kids to their maternal or paternal grandparents’ farms on holidays. On Sundays the family attended Weyburn’s Lutheran church. Though there were just a few homemade outdoor rinks around when Tanner was young, hockey was in his blood. He started playing at five, though at first he refused to go on the ice unless his dad joined him. Brent coached his boys from peewee through to junior.

Though Tanner loved other sports, he excelled at hockey. At 16 he was invited for a tryout by the Western Hockey League’s Saskatoon Blades. His mom warned Tanner as he left for camp that even if he made the team, he was not moving away. “I was not having my baby away from home!” says Gwen. Tanner didn’t make the team.

As a boy, Tanner pleaded for a dog. His parents suggested they’d get one when they moved to a farm. By age six, Tanner figured out that was never happening. But at 10, his parents caved and they got Thistle, a bichon shih-tzu, who lived 15 years. Dogs were always a big part of Tanner’s life. So was hunting.

His dad, who owned Kaufmann’s Meats when the family lived in Weyburn through the 1980s, was an avid hunter. Gwen sewed Tanner, just five, and later Matthew, bright orange mini overalls so he’d be safely visible when joining Brent, a gun safety instructor, on hunting trips. “I taught my boys hunter safety,” says Brent. “By the time Tanner was six, he could shoot a .22 and hit a gopher. He was 12 when he shot his first buck, and I made him field dress it and finish it when we got back.” Tanner often hunted deer, ducks and moose with his dad and brother.

The Kaufmanns moved to Regina in 1990. One day in May 2003, Tanner, who had started work in the autobody shop at a Nissan dealership, went to a Nitty Gritty Dirt Band show in Regina. He wasn’t a big fan of country music, but some buddies offered him a free ticket. At the show, he spotted Alyscia Herauf. They’d attended high school together in Regina, but only vaguely knew each other.

Tanner asked Alyscia to dance as NGDB played “Fishin’ in the Dark.” Gwen had made sure her boys were excellent dancers, and Tanner wowed Alyscia that night. “He’s an amazing two-stepper. I danced all over his feet . . . Within two weeks I knew he was the one.” From then on, whenever they heard “Fishin’ in the Dark,” Tanner grabbed Alyscia for a quick dance.

Tanner was “honestly just the most kind man I ever met,” says Alyscia. He could put strangers at ease with a few minutes of conversation. Alyscia and Tanner married in Regina on Sept. 29, 2007. Their first son, Parks, was born in 2009. Kolt came in 2011. Tanner was a natural father. He could, says Amy, “create the coolest games, activities, obstacle courses, silly funny songs and dances, or cardboard creations that were absolutely magnificent.” He coached the kids’ football, soccer and hockey teams. “He just had so much patience and could talk to [kids] on their level,” says Alyscia. “They would hang off his legs.”

On numerous family camping trips, Tanner entertained everyone by juggling flaming firesticks, a skill picked up during a trip to Thailand. Still, Alyscia recalls, Tanner “could be cautious to the point of annoying. Gosh, he was the guy who would draw lines around firepits and say, ‘No, kids, you can’t go across this line.’ ”

That cautious side, though, didn’t keep Tanner—a heavy-duty mechanic who worked on buses for the City of Regina and later Mack Trucks at Redhead Equipment—from packing his life to its fullest. There was a tragic reason for his intensity. In 1999, Matthew, at 18, jumped in the back seat of a car with two friends to go to a movie. The driver rolled the car, and Matthew was killed instantly. The Kaufmann family felt “destroyed” by the loss, says Gwen. As a result, Alyscia believes, Tanner “lived his life like he knew life is short.”

On Sunday, Sept. 4, around suppertime, Tanner took the family’s new German shorthaired pointer, Macy, out to a field north of Regina to train the dog as a bird hunter. Moments after he parked in the ditch next to the farm road and exited his truck, an alleged drunk driver careened out of control, smashing into Tanner’s vehicle. Tanner, 37, and Macy were killed. The driver has been charged with impaired driving causing death.