I always imagined that the cabbage rolls my mom and her sister make–the best, in my books–hail from some recipe that my grandmother’s ancestors brought to Canada from Germany’s Alsace-Lorraine region some 150 years ago.

Nevermind that cabbage rolls and Alsace-Lorraine have little to do with each other. More importantly, it turns out the Vi Moffat, the English woman who lived across the street from my mom and her siblings in Strathroy, Ont., was the one who shared the recipe with my grandmother.

Memories can be tricky.

The 7th annual Terroir hospitality and food industry symposium on Apr. 8 in Toronto, was dedicated to the stories, memories and culture that surround food. The impressive roster of speakers, with nary a French, Spanish or Italian representative in sight–an observation that Scandinavian chef and author Trine Hahnemann pointed out as being indicative of the changing of the guard, so to speak, all had narratives swathed in nostalgic memories to share.

Hahnemann spoke of Easter rituals that her family participated in every spring, which involved a picnic lunch followed by revelry, a bonfire, beer and acquavit. Magnus Nilsson of Sweden’s Faviken, whose cooking style the New York Times recently described as having “a kind of Viking bloodlust,” recounted a defining moment when he killed one of the 13 lambs he’d raised on his farm. After the lamb nuzzled up against him, trying to get to his pocket where Nilsson usually stored a handful of grain, he pet the creature one last time, then shot it in the head and slit its throat with a double-edged blade. The blood poured out and crystallized on the cold ground. When Nilsson went into the house, he wasn’t expecting to cry, but he did. If everyone had to do this before they ate meat, he suggested, it might solve many of the agricultural, economic and environmental problems that surround meat production.

Kobe Desramaults, the Belgian chef of In de Wulf, told his life story, starting with his birth–which he didn’t remember. His parents bought an old farmhouse in Dranouter and converted it into both a restaurant and a bed and breakfast. Trouble arose when every night the restaurant became a boistrous sort of late night bar while the guests of the bed and breakfast desired peace and quiet. So his parents split up.  There may have been other reasons, he confessed, but that’s the story he was fed. When the business was about to go under and his mom was going to sell, Desramaults took over. And in 2005, he became the youngest chef in Belgium to secure a Michelin star.

Rene Redzepi, the chef of the world’s best restaurant, Noma, for three years standing, recounted how he burned out in 2010 after reaching heights he’d never expected–including the best restaurant nod, and writing a bestselling cookbook filled with recipes, he admitted, that no one will actually make. He tried to remind himself why he got into the game of working 16 hour days to begin with. It was the memory of roasted chicken rubbed with chili, salt and olive oil and roasted over a fire of chestnut wood, the fat and juices seeping down onto the rice that cooked below that his extended family would prepare while holidaying in Macedonia.  “Food is like a time machine,” he said. “It fills you with memories.” The chicken epiphany caused Redzepi to ignore suggestions to buy fancy silverware and more expensive ingredients for Noma, now that the restaurant had reached such heights. “Like the food would f–king taste better if the waiter’s wore bow ties,” he said.

Peter Oliver–the Oliver of Oliver & Bonacini–recalled his mother, who raised three kids in a two-room house, and how the meals she cooked were better than any fancy fillet mignon or foie gras. The memories of them rival anything he’s had since.

Sometimes, however, certain foods are best left on the shelves of our childhoods. Chef Matty Matheson of Toronto’s Parts & Labour recalled how he loved the Acadian rappi pie he ate every Christmas as a kid.  But now?  “It’s disgusting. It tastes gross.”

And chef Jeremy Charles from Raymonds restaurant in St. John’s tried to recreate his mom’s chicken tretrazzini by making the pasta from scratch. “But it never lives up to her version,” which, he admitted, is decidedly “white trash” in spirit.

One of the most peculiar talks–besides a wonderfully odd one by JP McMahon, the chef of the Michelin-starred restaurant Aniar Restaurant in Galway, who compared the attitude of many chefs today to that of earth artists, like Robert Smithson, from the ’60s–both wanted to get out of their confines and create art you can actually experience–was that given by the CEO behind Fergus Henderson’s St John restaurant in London, UK, Trevor Gulliver. He spoke about gastronomy, a discourse, he made quite clear, that doesn’t exist: it’s not a science and it can’t be taught.”You should remember that all we’re talking about is eating,” he said, as plates of pound cake paired with a gooey, unripened cheese and a glass of milk were passed around to the audience. “Just eat the cheese.”

And even though Gulliver also believes that journalists are “writing stuff that is just rubbish,” I think, in the end, I agree. 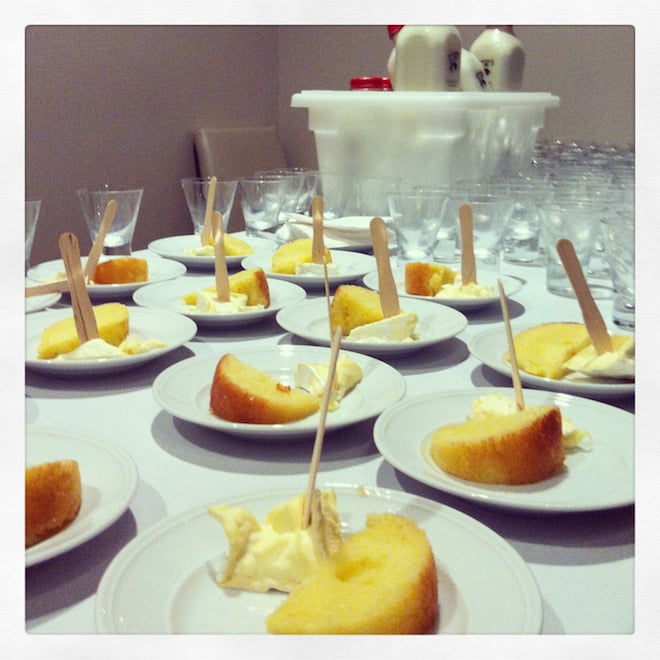