The box is empty: On iPhones, religion and disconnection 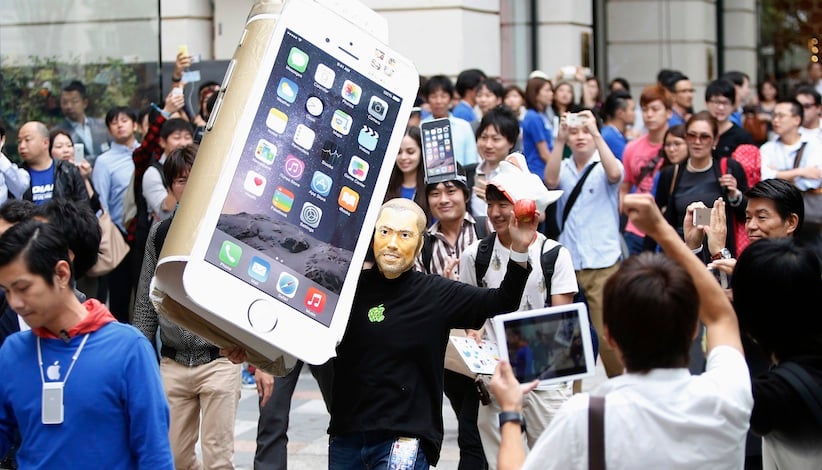 The scene outside an Apple store in Toyko earlier this week. (Yaya Shino, Reuters)

The ritual is now familiar. Apple announces a new iPhone. Several nights before it goes on sale, disciples begin to gather outside the stores, lining up respectfully, waiting for the doors to open.

If asked, some declare “it’s the most exciting thing” they’ve ever done. When the new owners finally emerge exalted, they hold their phones triumphantly above their heads, singing out with joy. Those still in line shout back with envy and anticipation. The religious undertones are inescapable.

Why do we line up? There is no shortage. The wonders of modern supply chains ensure there’s enough for all of us who want one. There is no sharp need. Those in line already have miracle-performing smartphones in their hands. And yet the ritual continues.

The photos of crowd-filled sidewalks illustrate that there is a great emptiness in the middle of our culture. We yearn for a common experience. Perhaps lining up with hundreds of strangers, bonds us with a shared objective, fills a hole in our lives. Paradoxically, although we have never been more interconnected, do we still feel disconnected and alone?

Does a new iPhone give our lives more meaning? The relentless improvements in technology give us hope in the promise of progress. It is possible that while once we were comforted by our faith in a rewarding afterlife, now we are reassured by the knowledge that our phones will get thinner, our Wi-Fi faster, our apps smarter.

I may not be singing hallelujahs at the front of this church, but I am not immune either. I sit in one of the pews nearer the back, but I am there nonetheless. I write this on a MacBook Air. My iPhone is next to me. My desk drawer is filled with old devices that were once the newest, the shiniest, the best.

But last year I did something uncharacteristic, almost blasphemous. I stopped buying things. All things. I went on a material fast. My rules were simple: I could not purchase anything durable. Food, experiences, services, repairs were fine. But no new clothes, gadgets, or gear.

I immediately went into withdrawal. I began to meticulously curate wish lists of things I needed (new Ray-Bans, a Canada Goose jacket). I began to window-shop for the first time in my life. Then I tried cheating. I needed a new woodworking tool, so I bought one – used it – and gave it to my father.

But after a few months, the yearning stopped. I began to appreciate some of my things more and realized that other things I didn’t use and didn’t need. I even began to give some away.

Here is an unsurprising but ironic secret: my only lapse was buying a new iPhone.

My old one was working but buggy. I went into the Apple store to have it fixed, and somehow walked out with a new one. I am still not sure how it happened. It could have been the gentle reassurance of the Apple Genius, promising that a new phone would solve all my problems. Or it might have been the smooth, simple lines of the store itself, so comforting and calming.

Regardless, I walked out with an iPhone box in my hand. My heart beating faster on the way home, I couldn’t wait to use it. I opened the packaging reverently. It was faster. It was smarter. But that was it. Everything else in my life was unchanged.

I went back to my material fast.

Now, nine months later, I am not a different person. I am not more zen. I am not any nicer. I am not happier. I’ve saved a lot of money, and that is about it. The truth is I have not found new meaning in my slightly more ascetic life. But neither did I find it in that iPhone box. I don’t think anyone lined up on those sidewalks has either.