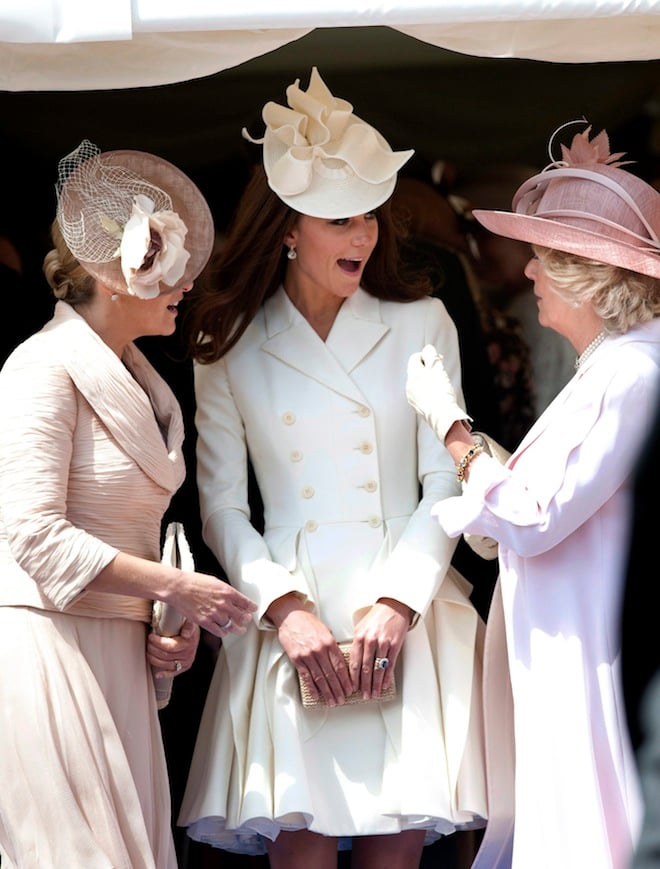 The world is so obsessed with the clothes worn by Catherine, duchess of Cambridge, that word her father-in-law Prince Charles was releasing his annual financial report this week sent everyone into a guessing game called How Much Did Kate Blow on Clothes?

But since her engagement in November 2010, Kate has had to create a wardrobe from scratch and, until the last few weeks, never repeated an outfit from one official engagement to another official function. Though she seems to always wear the same pair of beige L.K. Bennett platform pumps, a scan through her wardrobe on the authoritative Cambridge Chic site shows that she was wearing increasingly high-end, high-cost couture outfits rather than the more plebeian offerings that her sister wears. Kate is to Alexander MacQueen what Pippa is to Zara.

Though the annual report, released Friday, didn’t have a category called “Catherine’s clothes,” it is clear is that the vast majority of bills go to her father-in-law, who is, by all accounts, happy to pay. Cost for work-related clothes are allocated through his official expenses while bills for off-duty outfits funnel through his private accounts. (According to Hello, only clothes purchased specifically for overseas trips get paid for by the government, in this case the Foreign Office.) Charles’s private funds come from the Duchy of Cornwall, which is the historical estate belonging to the heir to the throne on which he pays a 50-per cent tax rate. As the annual report states:

The Prince of Wales’s private income comes from the Duchy of Cornwall, an estate comprising agricultural, commercial and residential property mostly in the South West of England. The Duchy also has a financial investment portfolio. His Royal Highness chooses to use the majority of his income from the Duchy to meet the cost of his, The Duchess of Cornwall’s, The Duke and Duchess of Cambridge’s and Prince Harry’s public and charitable work.

For the fiscal year ending March 31, the Duchy of Cornwall income amounted to $29 million. Even after paying for staff, there’s a lot left over for shoes in a colours other than beige.