The dark side of Kondo living 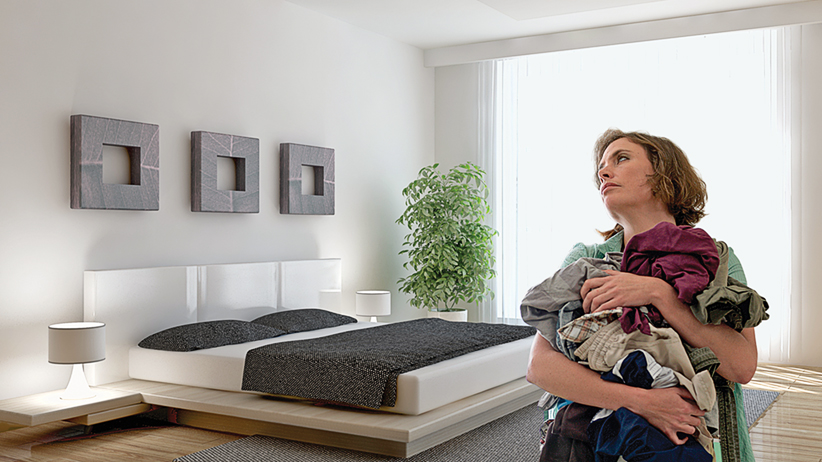 There is something oddly clarifying about the act of folding your underwear into origami-like objet d’art. To paraphrase Japanese lifestyle guru Marie Kondo in her blockbuster décor detox, The Life-Changing Magic of Tidying Up and its companion, Spark Joy: An Illustrated Master Class On the Art of Organizing and Tidying Up, the ritual induces something akin to a meditative state. Kondo’s tutorial boasts nearly two million hits on YouTube, but it’s while one is folding unmentionables that the magic of Kondo’s aesthetic begins to dim.

Which is a polite way of saying the novelty wears off. For an instant you might feel disappointed in yourself. Then an epiphany: you have no real problem with traditional underwear storage methods, i.e. horizontal piles, or with giving little thought to where (and how) to keep almost everything in your home. None of these things, you realize, are your problems. They are Kondo’s. Far from symbolizing the triumph of order, our unequivocal embrace of the KonMari POV represents the sweeping triumph of neurosis over common sense. We are not “detoxing” our environment as much borrowing someone else’s neurosis as a form of distraction.

Since its release in 2014, the international bestseller has been almost universally hailed as a life-changer (never underestimate how a book’s title shapes its reviews). Its elegant 31-year-old author, who runs a lifestyle consulting business in Tokyo, has been feted in Vogue and Good Housekeeping, and named one of Time’s most influential people. But you don’t have to look hard to be unnerved by how Kondo transforms her fascination with lifestyle editorial into a quasi-religion.

To her credit, Kondo does what no reviewer has had the courage to do: she makes no secret of her obsession and how it has consumed her. She confides that as a child she was lonely, shy and awkward. She tells us her busy parents didn’t take much interest in nurturing her. “Because I was poor at developing bonds of trust with people, I had an unusually strong attachment to things . . . It was material things and my house that taught me to appreciate unconditional love first,” she writes. At one point, tormented by her inability to create a blank tidy space, an adolescent Kondo cries out: “I don’t want to tidy anymore!”

Weirdly, that crisis of faith is the moment she hit on the perfect tidying method: “At that moment, I heard a voice. ‘Look more closely at what is there.’ ” By listening to that nagging voice in her head—rather than her own sensibly distraught voice—she settles on her mantra: “Keep only those possessions that ‘spark joy.’ ”

It says something about the culture that the home-organization shamans of our time—including Justin Klosky, founder of home-organization consulting firm O.C.D. Experience and author of Organize & Create Discipline—are people who not only struggle with OCD but elevate it to a virtue.

But feeling compelled to dry the shampoo, conditioner and soap after every shower doesn’t leaven the spirit. Neither does Kondo’s famous wind-down ritual, in which she thanks every piece of clothing before she can “finally relax and enjoy a cup of tea.” Kondo’s animism, always seen as a dash of cultural whimsy, has a dark side. She gives more thought to how socks “feel” than she does the humans who wear them. Husbands, kids and parents are presented as the obstacles to achieving one’s dream lifestyle. Call them spark-joy-killers. Her family eventually prohibited her from purging their goods without permission. “Don’t let your family see” is one of the rules she imparts.

Spark Joy takes a more tolerant approach: “You don’t have to make yourself like someone else’s things,” she writes. “It’s enough just to be able to accept them.” Her solution: Divide the house into personal space. Guess who gets the kitchen, bathroom and living room.

When the tyranny of OCD becomes our model for “life-changing” happiness, it’s clear we’ve confused narcissism with nirvana. As for whether transforming a home into a “space” and a life into a “lifestyle” represents a positive shift, you can’t say Kondo didn’t warn you.