The donair, adored by the East Coast, heads south

Roasted on a spit and slathered in a unique sweet sauce, the snack favoured by Maritimers is set for a new adventure 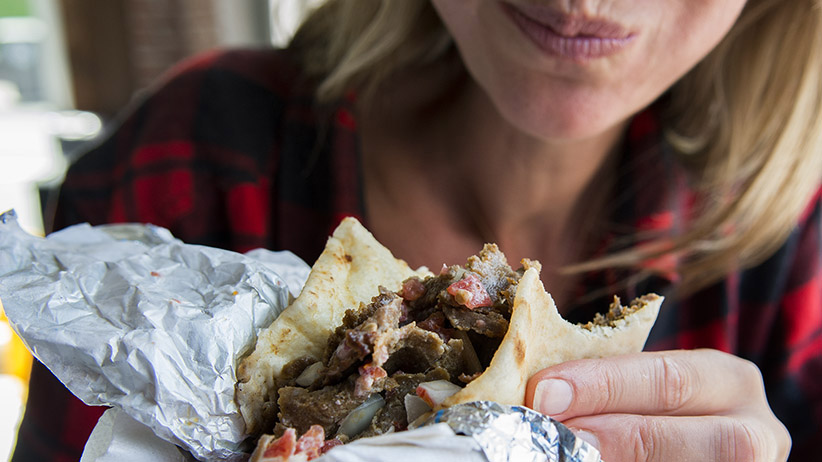 On a recent Saturday afternoon, 200 Haligonians gathered downtown for a common interest: that absurdly tender kebab of ground beef dressed in a sweet, milky sauce called the donair that is the real last call after a night on any East Coast town. The first-ever Halifax Donair Crawl began at King of Donair, a franchise credited for inventing the signature snack, and continued for two hours until the sixth and final stop on “Pizza Corner”—the Halifax intersection that once featured three pizzerias and where one of the first wraps was sold, in 1973.

“Everyone thinks it’s just roast beef on a spit. Most people don’t realize it’s spicy ground beef up there,” says Mike Whittaker, president of donair supplier Bonté Foods, who recalls his first taste in the late ’70s. “It looked like a big ball of meat sitting on that spit. And I remember taking that first bite and thinking, ‘This is the best thing I’ve ever tasted.’ ”

These days, the donair isn’t limited to pita form. It’s pizza topping and burger filling, fashioned into sausages and egg rolls—and a $147-million industry, notes Bonté. Alberta and B.C., paradoxically, account for two-thirds of these figures, thanks to the appetites of migrant Maritime labourers. But while donairs flank the country, they’re a rarity in the centre, where other street meats with the same Turkish rotisserie linkage reign. The Lebanese shawarma shares the beef and pita ingredients, but is unprocessed, marinated and packed with pickled vegetables. Its Greco-American cousin, the gyro, is a blend of lamb and herbs, served with tzatziki sauce.

Tony’s Meats is trying to change that by opening new markets, not just out west, but down south. The company from Antigonish, N.S., bought the original recipe and trademark in 2005 from its surviving Greco-Canadian inventor, and expects to have USDA approval next month, in time for the Americas Food and Beverage Show in Miami. And in May, sales manager Aaron Tingley gave many Americans their first taste at a conference in Chicago. Several distributors and a major deep-dish pizza chain expressed interest, he says. “The sauce was especially appealing.”

The donair has tried going south before. In the late 1990s, Bonté Foods, owner of the Moncton-based chain Greco Donair, targeted the area of Bangor, Maine, for an expansion. Living two hours from New Brunswick, some Mainers were already familiar with the meat. But Bonté’s four Greco Donair express counters and quick-service restaurants closed within a year.“People just weren’t used to it,” Whittaker recalls. “Once someone gets used to eating that meat with the tzatziki sauce, to switch them over and say, ‘Now try this,’ that’s not how [they] eat it.”

For people weaned on donairs, the tantalizing sweet sauce—a mixture of vinegar, garlic, sugar and condensed milk—is the heart of the street meat. But it’s proven a hard sell for gyro eaters. “If we can’t make it click in Ontario, what makes us think it can click in Boston or New York?”

In fact, one New York restaurant has made it click. King Bee, an Acadian-inspired East Village restaurant, debuted an upscale donair in April (an “Acadian gyro,” as New York magazine called it). Chef Jeremie Tomczak tweaked the recipe, using a beef-pork blend and topping it with a fried egg. He also added fresh lettuce, which is acceptable in Alberta but heresy in the Maritimes. “New Yorkers don’t have the background to be zealots,” notes co-owner Ken Jackson. “Because they’re eating it during daylight hours, you want some contrast or texture to lighten it up.” It’s now one of King Bee’s most popular brunch items.

This gives Tingley hope. “In these markets that don’t have traditional donairs, it just takes one or two to make it work and then we can expand,” he says. He thinks name recognition is the biggest obstacle. “They don’t understand the term ‘donair,’ ” he says. “Once we ask, ‘Have you had a gyro?’ they get it.” It’s left him wondering if his company should take a note from “Canadian bacon,” the U.S. usage for back bacon, and market it as the Atlantic or Canadian gyro.

Either way, Whittaker wishes them luck—“because, if they can open up the market there, I’ll be on their heels.”