He proved everyone who doubted him wrong, overcoming a brutal attack in his 20s. His positivity earned him the nickname 'Mr. Awesome'. 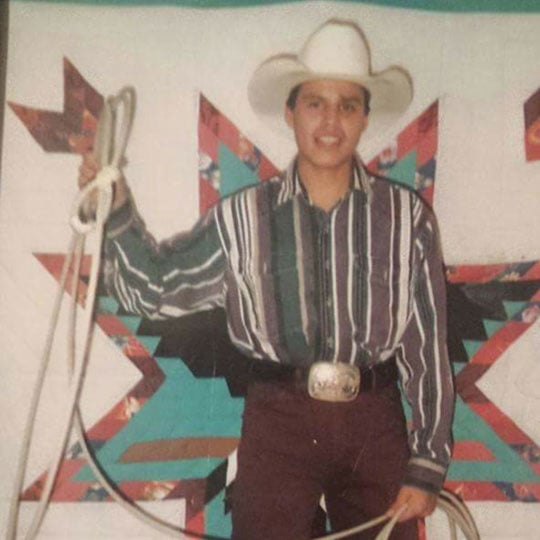 Burton Jay Tacan was born in Brandon, Man., on April 8, 1978, to Debra, a community health representative and Lyle, an educator, both members of the Dakota (Sioux) First Nations.

Burton grew up in Sioux Valley, about 45 minutes west of Brandon, as the oldest of five children; he had three sisters and a step-sister. His parents split when he was four.

“He was very adventurous as a little boy,” says Debra, who raised Burton and her other children as a single working mother. “He did stuff like what little boys did. He played with snakes and spiders. He was happy and he did well in school. He even was a valedictorian for his class in Grade Eight.”

Burton was also athletic. He played everything; hockey, volleyball, baseball and, his favorite sport, basketball. At 16 he decided he wanted to try his hand at rodeo, taking lessons at a rodeo school in nearby Oak Lake.

Burton took pride in his Dakota heritage. He was given the Indigenous name Walking Fire, the same as his great-great grandfather Norman Chaske, who fought in WWI. Burton joined the first annual Unity Ride by a group of Dakota men and women riding from Southern Manitoba to South Dakota. The journey raised awareness about the Little Crow’s War of 1862, when, breaking its treaties, the United States hanged 38 Dakota men in the largest mass execution in U.S. history.

At 21, Burton was brutally beaten by two teenagers at a party in Sioux Valley. Debra had just checked into a hotel in North Dakota, to attend a memorial ceremony, when she got a call that Burton had been airlifted to a Winnipeg hospital. Burton had started drinking in high school, says Debra, but he “was always a popular, handsome guy. And I know that people got jealous of him. I think that’s the reason why he got beaten up that night.”

Debra rushed to the Winnipeg hospital to see him. He was in a comma with a severe brain injury. “There he was laying in a hospital bed and his head two or three times bigger than normal size.” Burton remained in a coma for six weeks. “When he came to he didn’t even know who we were. He was like a baby. He couldn’t talk or walk.”

Burton spent a year in hospital recovering in Brandon. He would continue to suffer from short-term memory loss and did not regain full use of his left arm. When he left the hospital to stay with his mother, she had to do everything for him until he learned to walk again. She would bathe him, feed him and, just as importantly, cheer him on to bring his spirit back.

Four years after coming home, Debra nudged Burton to move into a small apartment in Brandon. Despite a life of constant physical pain, the old happy-go-lucky Burton began to re-emerge. He volunteered at Brandon’s Samaritan House, a skills training centre for disadvantaged people.

He also attended or visited practically every church in Brandon, estimates his mother. Part of that was just Burton’s gregarious, sunny nature and desire to be around good people. Part of it was his belief in God, says Debra.

In his spare time, Burton loved to read, do puzzles and listen to music. He was a huge fan of Winnipeg-based aboriginal folksinger and musician Don Amero, meeting him once at a concert. Burton also met Prime Minister Justin Trudeau and kept a newspaper photograph of the encounter.

Burton had three children, two girls and a boy; the youngest nine, the oldest 21. “He loved them so much and he was a good father,” says his sister Pernella, adding, “he had come from a long way and sure proved wrong everyone who doubted him.”

Lyndon Bournon, the Adult Education coordinator of the Brandon Friendship Centre, met Burton 10 years ago when Burton began a literacy program there. “He had this aura of positivity and determination,” recalls Lyndon. Whenever Burton came to the centre—and pretty much anywhere else he went—he’d make a grand entrance, announcing he was doing “awesome!” That earned him the nickname Mr. Awesome.

On Sept. 30 a man and a woman followed Burton to his apartment, gained entry, and savagely beat him during a robbery. Airlifted to a Winnipeg hospital with severe head injuries for the second time in his life, he died on Oct. 3. He was 39.