He always looked out for his brothers and sisters. As a ﬁre chief he watched over a much larger family—the town he loved. 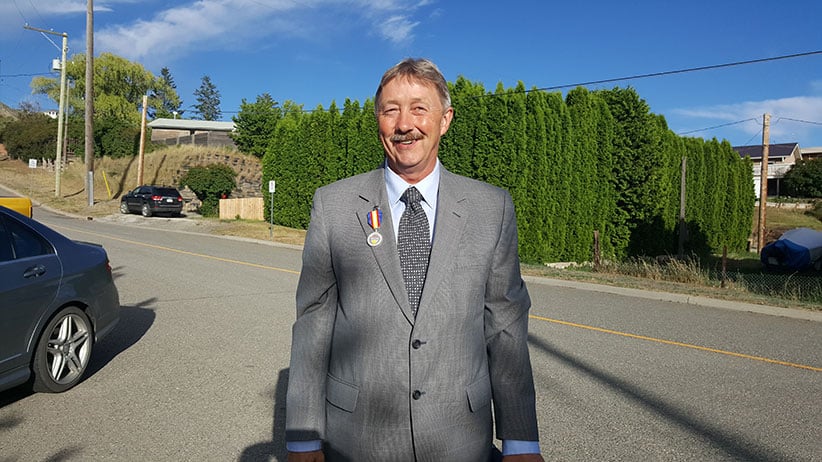 Clayton Kenneth Cassidy was born on Feb. 12, 1958, in Vegreville, Alta., to Kenneth and Juanita. He was the fourth-oldest of eight children—six boys and two girls. The family lived on a farm just outside of town where they grew alfalfa and raised cattle, pigs, chicken and horses.

As the middle child, Clayton took on the role of mediator in a family of rambunctious children. “He was always concerned about everyone else,” says his brother Patrick. “He liked to spread good karma around because it made him feel good.”

Clayton was a meticulous youngster as well. “His toys always lasted years and years,” says Patrick. “So we were always bugging Clayton to borrow his toys. He’d allow that to happen, but only with complete supervision,” he laughs.

In 1969, a ﬁre destroyed the family’s barn and crop, forcing them to sell and move. In 1971, they wound up in Keremeos, B.C., where Clayton’s dad bought a Tastee-Freez franchise connected to a drive-in theatre, renamed the Cassidy Drive-In. The Cassidy kids all worked there, for 25 cents an hour. For about ﬁve years, the Cassidys lived in a movie theatre next door to the drive-in. They took out the seats and the kids all slept there while their parents lived in an upstairs apartment. “We got to play indoor hockey, a little bit of football. We had a stage with a big movie screen on it,” says Patrick. But, alas, they had no projector.

Soon after Clayton graduated from Similkameen Elementary Secondary School, the family moved to Cache Creek, B.C., where Kenneth bought a Pay-N-Save gas station. Clayton worked for his dad, then, at 19, got a job with what was later known as the Highland Valley Copper mine. In Cache Creek, mutual friends introduced Clayton to Rose Brezina. They married on April 12, 1980, and had three boys: Kenneth, Kevin and Derek.

An avid curler and “beer-belly” hockey league player, Clayton kept his kids very active, says Rose. He coached them in hockey, soccer and other sports, and took them hunting, camping, boating, snowmobiling and ﬁshing.

Clayton was also a car nut and a mechanic who “could ﬁx anything,” says Rose. Wyatt McMurray, a good friend of Clayton’s, raced stock cars in Vernon, B.C. Clayton helped with his pit crew. Last year, and in 2015, Clayton was Wyatt’s navigator in the famed Baja 1000 rally race in Mexico. In the 2016 race, they were speeding through the black desert night when “all of a sudden our lights had nothing to shine on,” says Wyatt, who jammed on the brakes. They came to a stop just short of a deep, steep ravine. Clayton was unfazed. He “was just that guy you could never rattle,” says Wyatt.

Ken worked with Clayton at the Highland Valley mine, where Clayton was a senior foreman. His dad, says Ken, would “take the time, on a one-on-one basis, to really talk to” his workers, remembering who their families were and asking about them. Clayton’s philosophy was that “just being a good person” was a big part of being a good foreman.

Clayton’s calm demeanour came in handy as a volunteer ﬁreﬁghter in Cache Creek. As ﬁre chief from 1992 to 2002, he oversaw 25 volunteers and fought a number of dangerous blazes. Just over a year ago, after a four-year stint as a town councillor, Clayton, who’d just retired from his mine job at age 57, was re-elected as ﬁre chief. He was drawn to ﬁreﬁghting, says Rose, not so much by adventure as by his desire to serve the community.

In May 2015, flash flooding hit Cache Creek. Clayton, umbrella in hand, walked out in a metre of water to help whomever he could. For nearly six months after the crisis he continued to help people dig out and repair their properties. Premier Christy Clark awarded him the Medal of Good Citizenship for his efforts.

Around midnight on May 5, Clayton, as ﬁre chief, was inspecting rising water levels in Cache Creek. He ran into a friend and talked about things dear to him—his children and his seven grandkids. After they parted, Clayton was standing on a small bridge when rushing water tore it away, sweeping him into the frigid creek. His pickup was found the next morning, running with the door open.

More than 1,000 people searched for days and then weeks for Clayton. On the morning of May 27, his body was ﬁnally discovered a short distance from the bridge. He was 59.