She was an avid reader and outdoorswoman. When her father died, she lost her faith but not her defining generous spirit. 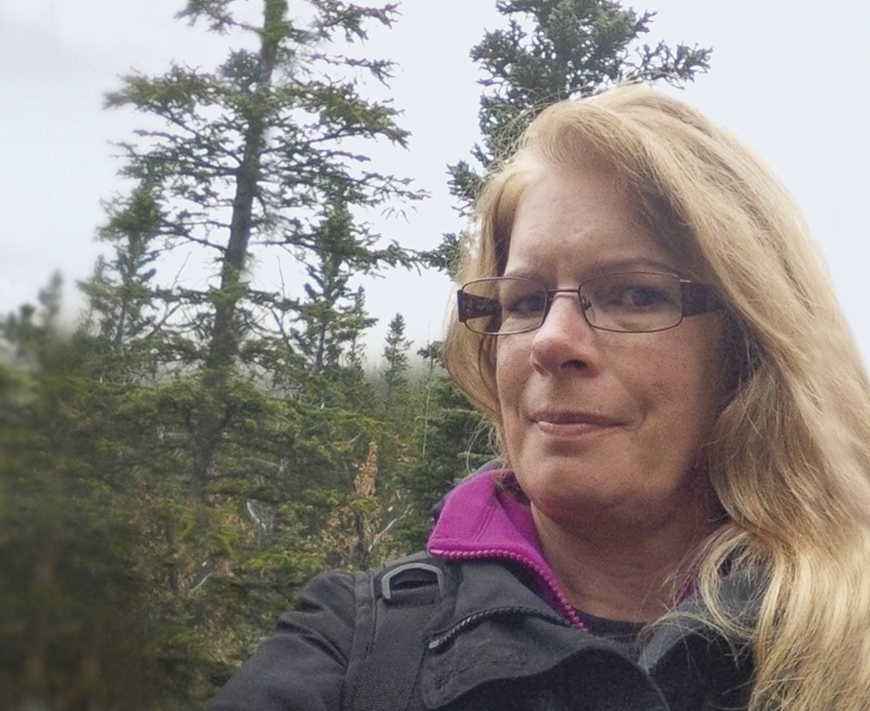 Heather Anderson was born Feb. 8, 1966, in Montreal to David McAsey, who was in public relations, and Maureen, who stayed home to look after Heather and her two younger brothers, Brian and Sean.

The McAseys moved from Montreal to Sarnia in 1970. On a trip to a local farm, five-year-old Heather delighted in all the apples. “For the first year of school, every picture she drew was of apples. She became an expert apple drawer,” says Maureen.

Two years later, the family relocated to Calgary when David got a PR job with an oil firm. They loved camping in the mountains. Each summer, before heading to campsites around Banff National Park, Heather made her parents stop at a library “to fill up a whole shopping bag with books,” says her mother. “She’d sneak them into the car because they took up so much room.” In addition to being a book lover, Heather stood out from a young age for her kind, generous spirit, says her family.

The McAseys attended St. Gerard’s Parish in Calgary every Sunday. “We always sat in the front pew because my husband’s hearing was a bit off,” says Maureen.

After graduating from high school, Heather got a job as a gas jockey at a Calgary Co-op station. One of her co-workers there was Wally Anderson. “I thought she was beautiful, of course,” he recalls. “And her red hair! She had red hair at that time, which I thought was real. I found out later it wasn’t,” he laughs. There was something else that attracted him to Heather, that thing anyone who knew her said: “She was just such a nice person.”

Wally left Co-op after a short time, but not before asking Heather out. They married in September 1990 and had daughters Sarah in 1996 and Jennifer in 1999.

At first, Heather stayed home to raise their kids. In 2003, she worked as a lunchroom aide at an elementary school. Then, after taking courses, she started working with special needs children in 2006. “I think she had the patience of Job, to tell you the truth,” says Maureen.

Three years ago, recounts Wally, Heather learned two brothers attending the elementary school she worked at “went through the school day with nothing to eat.” For the rest of the school year, Heather bought extra groceries to make them sandwiches. Later, at Don Bosco School in Calgary, Heather volunteered with the Breakfast Club, helping prepare food for children who came to school without having proper meals.

The Andersons were campers. Every summer they spent a few weeks tenting at Scotch Creek, near B.C.’s Shuswap Lake. Three generations of family would camp together. “It looked like a tent city,” says Wally. Often, Heather reposed on the beach with a book.

She never lost that love of reading. The house was kept loaded with books—crime novels, romances, mysteries. In an average year, she’d read 60 or so books. Some years she topped 100.

Heather was also an avid hiker and went snowshoeing in the winter. After snowshoeing with one of her friends, “they would have a fondue and wine in the parking lot,” says Jennifer.

When her daughters were young, Heather wanted to put them in Girl Guides. Learning there was no leader, she took on the role herself. She didn’t cut her children any slack, says Jennifer. “She definitely wanted us to get all our badges—more than the other kids.”

Four years ago, Heather’s dad, who had a pacemaker, passed away from a heart attack. The two had been very close. For many summers, Heather and her daughters joined her dad in volunteering with the Okanagan Gleaners Society. They would harvest vegetables that were later dehydrated and shipped to Third World countries.

Though Heather continued to go to church regularly with her mother as she always had, she couldn’t bring herself to go inside anymore. She was angry and confused that God could take her father away. So she sat in her car during the service and read.

Around 1:30 a.m. on Dec. 29, Heather was returning to Calgary after driving Sarah to Edmonton when the semi in front of her careened into a ditch. Heather pulled over to help the 36-year-old driver, Elayaraja Balasundaram. As they stood by the rig, another semi, hitting debris, crashed into the pair, killing them both. Heather was 50.