The hell of a perfect, cubicle-filled office 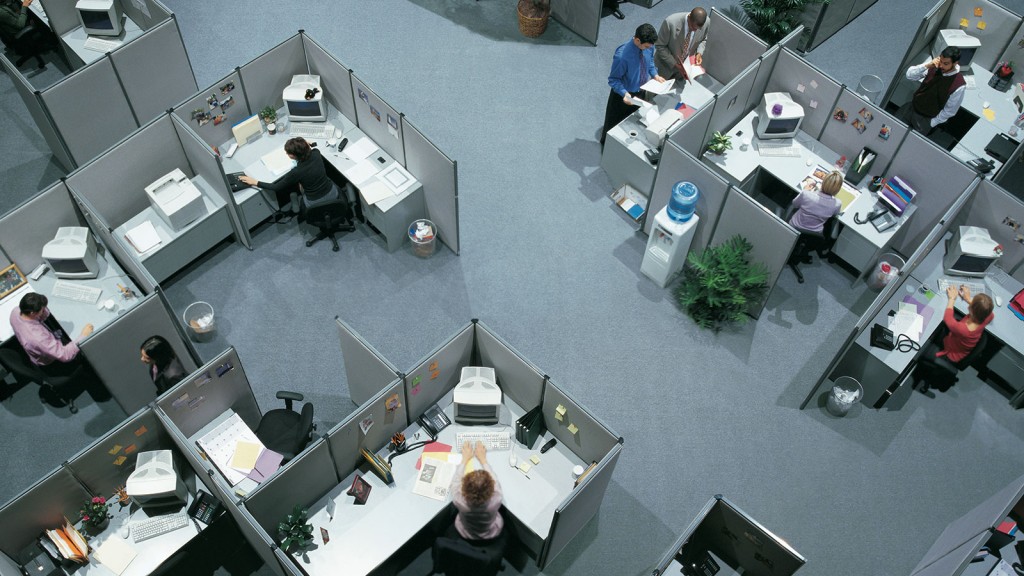 In 1958, an art professor named Robert Propst set out to design the perfect office. As head of research for the Herman Miller furniture company, Propst began to study the meaning of the modern-day workplace. He conducted extensive studies of office workers: identifying their every inefﬁciency, useless motion and wasted second—in the wild hope that he might, through architecture, correct them. Propst is seen as an early inventor of “ergonomics.” His observations on the importance of periodic physical activity spurred his invention of the stand-up desk. His belief that “fortuitous encounter[s]” between employees fuelled creativity led him to design porous workspaces with plenty of meeting spots. When his magnum opus was released onto the American market in 1964, its clean lines, movable walls and swivel chairs were “received as a liberation.” Propst called his creation the “Action Office,” but today it is known as “the cubicle.”

By 2011, according to Nikil Saval’s 2014 book, Cubed: A Secret History of the Workplace, at least 60 per cent of working Americans performed their labour in some form of cubicle. But only seven per cent claimed to prefer it to other kinds of work environments. In popular culture, “cube farms” are depicted as stagnant, anonymous incubators of petty grievance (think Dilbert and The Office)—not the liberating engines of creativity and social mobility that Propst hoped they would be. “Man is born free,” Saval writes, playing on Rousseau, “but he is everywhere in cubicles.”

It wasn’t meant to be this way. Above all, Cubed is a history of “office utopianism”: the belief that the perfect office is both attainable and inevitable—and that, once realized, it will nurture a state of pure efficiency. Saval takes readers on a zippy whirl through the greatest workplace inventions of the last two centuries: the “office clerk” and the “type-girl;” the air conditioner and the Modern Efficiency Desk; skyscrapers, suburban office parks, and “wacky” dot-com work spaces.

The first office was created to handle the first paperwork—which belonged to 18th-century merchants. By 1910, there were some 4.4 million American office workers. By the turn of the century, the world had its first “efficiency expert”: Frederick Taylor, whose crude model of workplace incentives fed the era’s obsession with productivity. Taylor turned desks away from the door (to minimize distraction and maximize supervisors’ snooping abilities). Later, his teachings gave rise to departments of personnel management (“human resources”) and the professional manager. Even Lenin, writing after the Bolshevik Revolution, granted that “Taylorism” was both “the refined brutality of the bourgeois exploitation” and something that “the Soviet Republic must at all costs adapt.”

Today’s designers see offices not as potential tools of management science but as organisms that should adapt to the human animal. Saval writes that furniture companies have recently “intensified their use of anthropological techniques . . . to design around behaviour rather than attempt to inﬂuence or change it.” The utopian office is thus über-adaptive, minimizing its own bearing. “We’re not designing private offices anymore; we’re designing community spaces,” Lisa Fulford-Roy, a senior vice-president at the design firm HOK, told Maclean’s. (HOK famously designed Toronto’s Google HQ, which features a fireplace lounge, a “grassy knoll,” a secret lounge hidden behind a bookshelf and carpeting made from “recycled fishing line harvested from the ocean floor.”) Fulford-Roy says the trend is toward “evidence-based designs,” which privilege flexibility.

But flexibility oft proves elusive. The original cubicle was designed to be flexible. But over time, its walls grew rigid. “What passed for workers’ welfare,” writes Saval, “could with a little imagination also be seen as social control.”