Journey of a West Coast oyster

How a couple of farmers grow, harvest and transport their prized and sustainable bivalves to eateries and shops across Canada 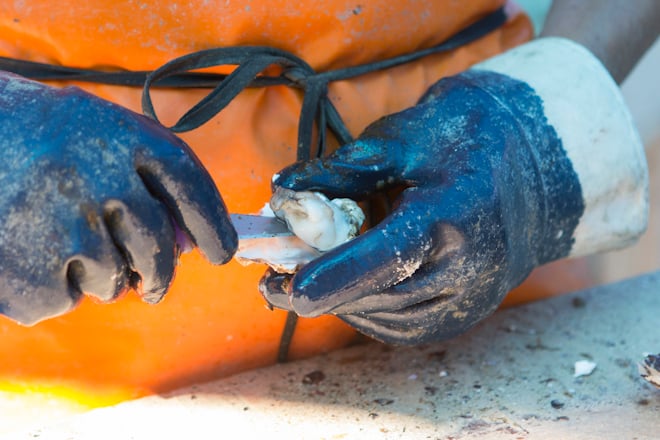 It’s not yet 10 in the morning when Jules Frank shucks a Black Pearl oyster, tilts her head back and slides it into her mouth. “You want one?” She asks me, digging around in the pile on the sorting table in front of her. She inserts her shucking knife into the hinge of a plump oyster with purple black frills, a signature of the Pacific oyster. Loosening the meat, Frank flips it over, so the underside is perfectly presented on the half shell. “A little shucker’s trick,” she winks.

The taste raises the bar for any oyster I will ever eat again. Clear and clean, sweet yet salty, it boasts the perfect ratio of liquor to meat. “That’s a number one Black Pearl right there,” she says. “Nice round shape, fat little belly, hard shell.” This is the kind of oyster Frank and her partner Ian Mowat, members of Out Landish Shellfish Guild and Oceanwise partners, hope most of the 25,000 dozen oysters from this year’s harvest will be. 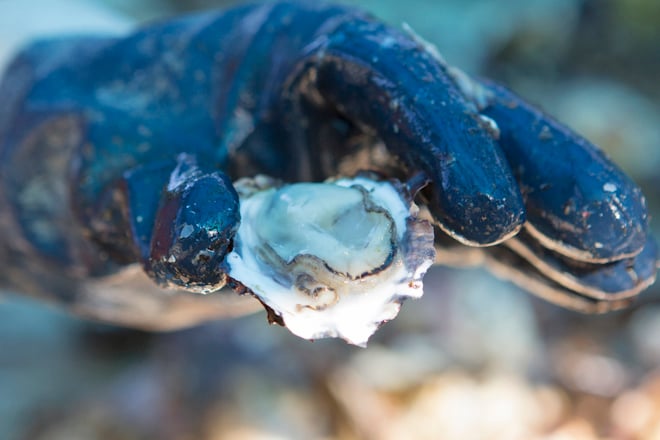 A Black Pearl, one of Out Landish Shellfish Guilds’ prized products (photograph by Greg Miller)

The Black Pearl is a trademark of the guild and a product that’s in high demand at restaurants and seafood shops across the country. Joe Beef in Montreal was one of their first customers. And it’s why I’ve come by plane, car, two ferries and a boat to Quadra Island, BC, to see these tastemakers in action.

They’ve invited my photographer Greg Miller and me to spend the day touring two of the guild’s farms; a deep-water lease where “pampered oysters” are raised and a beach lease. “You can really tell the difference between a beach oyster and a tray oyster,” says Mowat. “They want the beach stuff out east, but it’s harder to grow.” It takes three to four years for a beach oyster to reach market size, while a tray oyster from the deep-water lease is ready in two.

We met them at the docks in Quadra’s tiny community of Heriot Bay and make the 25-minute commute up a narrowing channel at the northern reach of the Strait of Georgia, across to the south-eastern tip of Read Island, a Google Earth-defying mass of land accessed only by private boat or float plane. 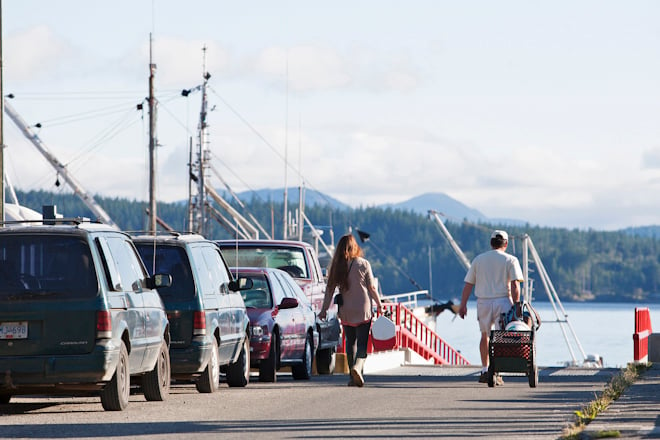 The day starts in Heriot Bay, with Mowat heading to the dock (photograph by Greg Miller)

“We saw whales out here the other day,” says Mowat at the wheel, pointing to a rippling area of ocean with a mountain backdrop. It’s a playground for sea life here and a fertile opportunity for farmers who aren’t afraid to get wet. Forty years ago this area was populated with fishermen and loggers, but things have changed. “The shellfish industry has essentially superseded the fishing industry,” says Michael Griswold, president of the Quadra Island Harbour Authority. Just last February, Heriot Bay got a new float and gangway to help accommodate this shift.

Industry sustainability is why Mowat and Frank bought this deep-water lease 11 years ago. “We can replenish our own stock,” says Frank, referring to the roughly 1-million oyster seeds the guild buys each year to share. However, this year seed has been hard to come by and they’re hoping for a hatchery to open in the area. Black’s buoys, bobbing in the waves, anchor sacks still filled with last years’ seed. 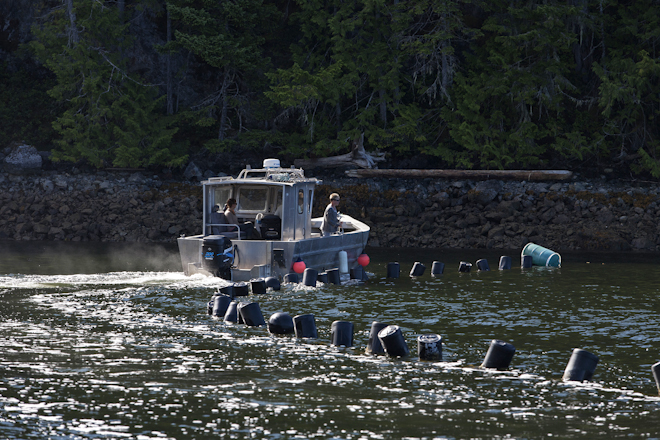 Soon they’ll be moved and spaced out in trays where they’ll have ample room to grow up beautifully—something that Frank and Mowat have a hand in accomplishing. 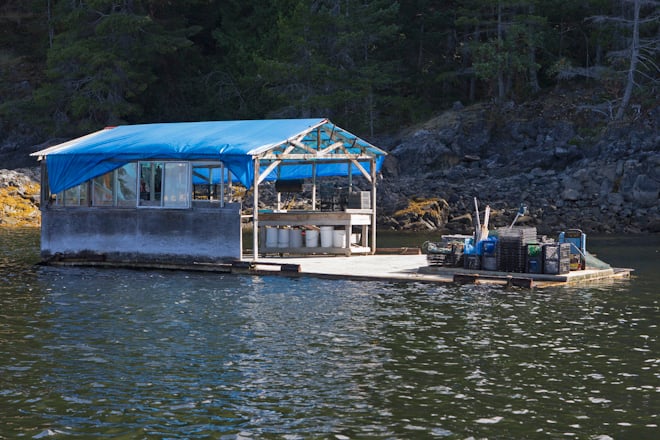 Decked out in waterproof aprons and armed with scrub brushes and shucker knives, they methodically sift through piles of oysters, taken from the trays hoisted up by winch from underwater. 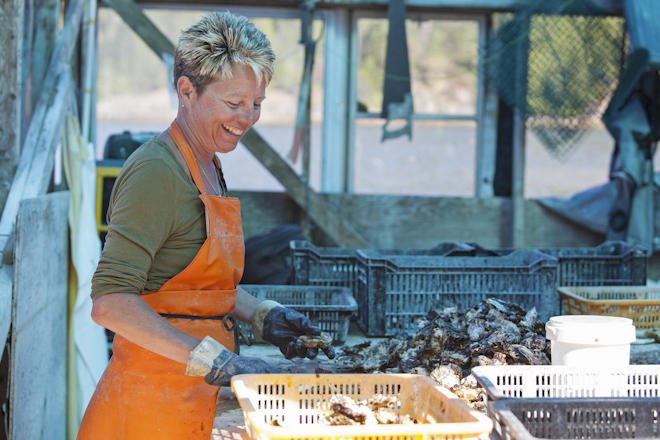 Frank size-grades and sorts the oysters (photograph by Greg Miller)

“We spend all day doing this,” says Mowat. They sort oysters into three main categories: petite Black Pearls, small-sized Gems and Big Extra Smalls for custom orders. “Then whatever isn’t market size we put back underwater and let it grow up,” says Mowat. 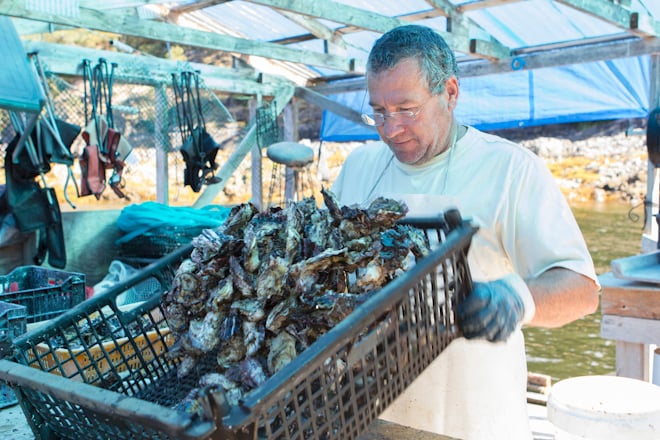 While they sort, they’re also hand-tumbling. “You knock these oysters around a bit to take off some of their frill,” says Frank. It’s an undesired feature for consumers. “But we don’t want to start knocking too much off,” he says, “because these guys have to make it all the way to Toronto. As soon as you break their edge, they lose their water and then they’re dry when they’re opened on the plate.” It’s this hand-tumbling that separates their oysters from Kusshi; the mechanically tumbled Pacific oyster from the same species. 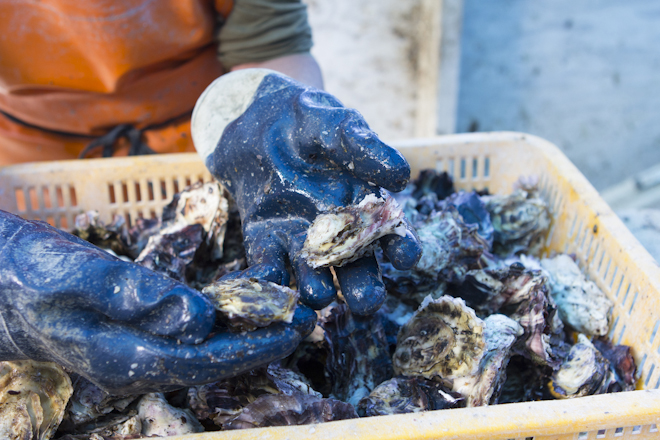 As they’re working Frank and Mowat stockpile sea urchins pulled up with the oysters. They’ve been placed in the trays on purpose and will be recycled in other trays. “Urchins toughen the oyster shell up,” says Frank. “They chip away at the frills and the shell grows back stronger, creating a heavier oyster that feels good to hold.” Frank swears that the urchin’s roe, eaten raw, tastes like candy. 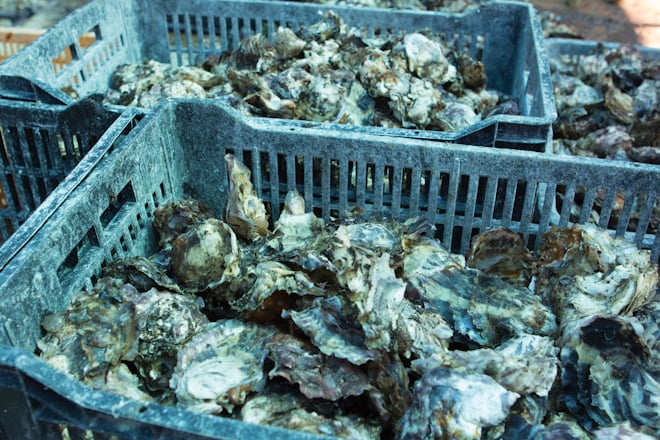 Oysters wait to be sorted (photograph by Greg Miller)

By the end of each day they’ve sorted about 3,600 oysters, which they count out into sacks of 10 dozen and lay on the beach to let the tides wash over them. On Monday afternoons, they’re taken to Heriot Bay where they start their three-day journey early Tuesday mornings to be delivered—still very much alive—to restaurants on Thursday night, just in time for dinner service. 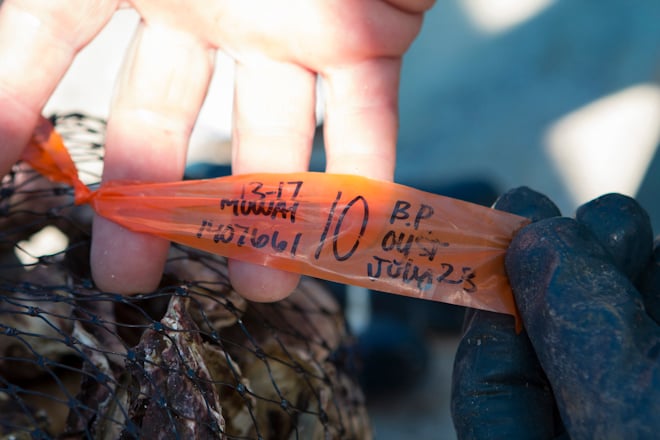 Soon we’re off to visit Kathy and Victor McLaggan’s beach lease on nearby Marina Island, where the guild’s Beach Angels are raised. Like the taste they’re prized for, the place is rugged and wild. “The only way you can tell somebody is farming here is if you see the signs saying oyster lease up in the trees,” explains Mowat as we pull up into shore after picking Kathy McLaggan up to give us a tour of the beach she’s been farming for 22 years. 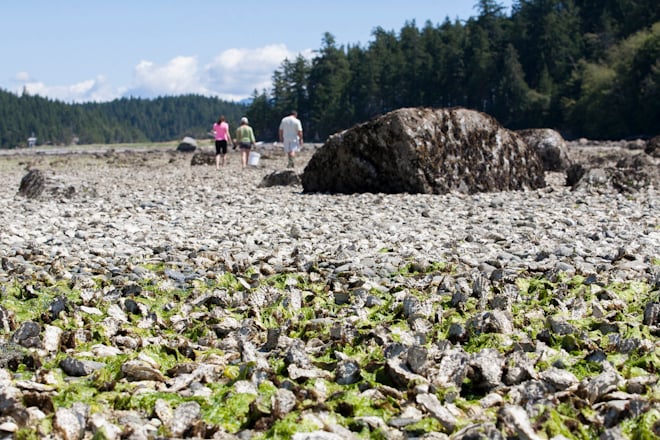 A regular day on the farm involves de-clustering the oysters; walking around and separating those that are growing together. McLaggan pokes at them as she navigates the beach, pointing out where she was just working yesterday. “Sometimes I pick up an ugly oyster and say, my gosh! I’ve picked up you before,” she says. 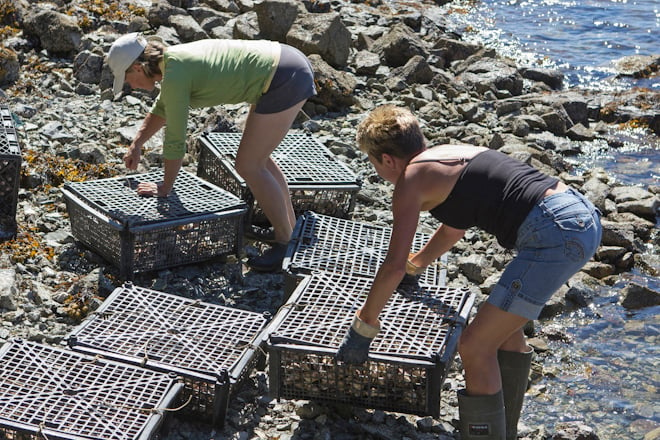 When the pretty ones become a marketable size, they too are taken into Heriot Bay to start their journey. To replenish the beach, the McLaggans throw seed on it. Occasionally, the conditions are right for the oysters to “set” on their own, but that hasn’t happened in four years, a reality that has the couple even more desperate to buy seed.

In this same time, the guild has started hosting Chef’s Getaways, inviting chefs from across the country to come and visit their farms. “It’s about educating people about our product,” says Frank. Last spring, more than a dozen chefs and their families came out to take part in their fourth annual two-day event connecting tastemakers and forming new and valuable bonds between producers and restaurateurs. “We eat oysters and sit up late by the fire.” 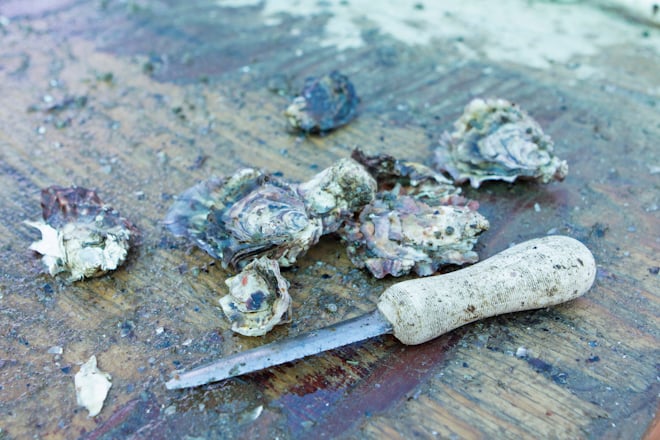 The shucker's knife: an essential tool (photograph by Greg Miller)

While most gastronomes are more inclined to eat their oysters raw and naked, Mowat says Frank’s recipe is a winner: “Put your oyster on the barbecue or open fire, to get that really smoky taste. Cook it until the juice disappears a bit and when the lid pops, scoop hollandaise on. Put it back on the heat and cook it just so the hollandaise thickens up.”

Somewhere, an entrepreneurially minded foodie just got an idea for a food truck.