Supplies may be tight, but loyal customers are always lining up for those seal flippers 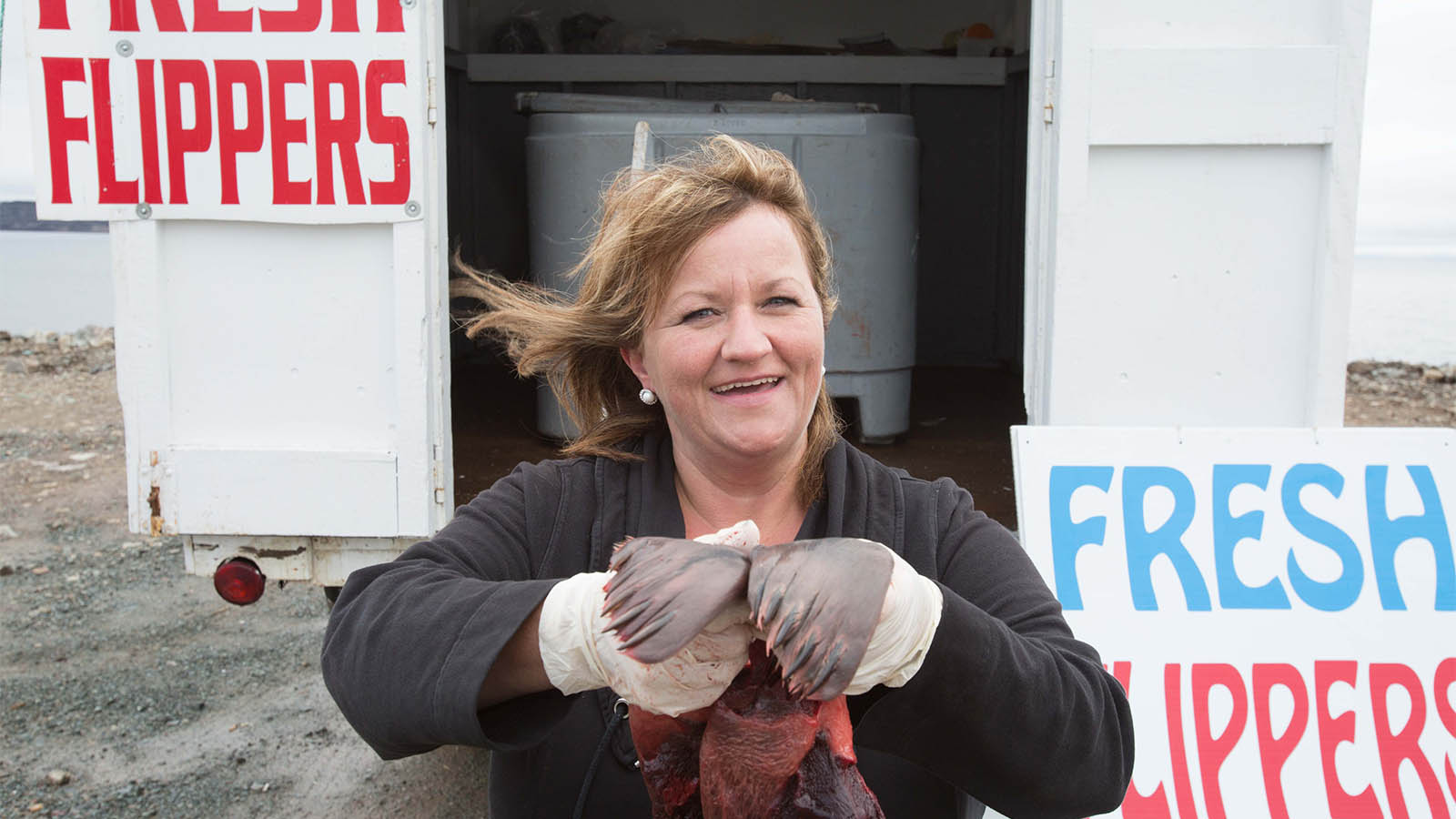 In the spring, the weather on the Avalon Peninsula turns mauzy. Unremitting fog, of the sort to drive people mad, cloaks the land. A 2008 Chevy Silverado pickup parks on the apron of the St. John’s waterfront, the driver puts out a sign reading “Fresh flippers” and the word is, literally, on the street. Those with a hunger have been anticipating its arrival, and sales commence in short order. The Taylors have been selling seal meat (and at other times of the year halibut, whole cod and fillet) out of the back of a truck here for more than 40 years.

This morning Heidi Taylor, in her 20th year purveying harbourside, sells out in little more than an hour. “There’s not so much demand for the pelts this year,” she explains, “and the sealers won’t kill an animal for its meat alone.” The harvesters, or swilers, are either landsmen, small-boat fishermen from the many fishing communities along Newfoundland’s northeast coast, or teams aboard longliners—fishing vessels anywhere between 10 and 20 m in length, capable of going further offshore (though still within the parameters of the 100-mile diet). They travel to the leading edge of the pack ice, a field of slowly thawing sea ice 15 times the size of Prince Edward Island, strewn with more than a million harp and hood seals. For Taylor, this year’s stock is coming exclusively from the longliners.

Scarcity of supply (not of resource: the population of seals has been exploding ever since the large-scale commercial hunt ended in the 1970s) has driven up the price: cleaned flippers are $5 each this year. They’ve never been so dear. In times, prices have been half that.

The appetite for seal is undiminished in Heidi’s two decades selling them. When her family business has access to enough product, they can move between 15,000-20,000 flippers a season. That’s a lot of meat pie. Having been at it this long, Heidi knows many of the returning customers well—not, she says, by name, “but by their stories.” It’s a ritual seasonal delicacy for Taylor’s older clients. “Younger ones,” says Heidi, “are eating it because it’s so healthy.”

They sell mostly flippers. They are the easiest part of the seal for the home cook to handle, and are conveniently a serving each. The carcass is more cumbersome, Heidi says. Its fans like to “buy them three or four at a time, and they’ll get together in someone’s shed and bottle them. To have something to take up in the country hunting.”

When Heidi’s father, Doug, first started, taking the reins from his father before him, the truck was a 1969 Ford half-ton and there were three or four other purveyors in the business, all parked further west, around Steers Cove. It’s only the Taylors now. The spring seal harvest was a good time of the year to be in a cash business, with “little going February and March,” as Heidi puts it, and money needed for rapeseed to plant the fields of strictly pesticide-free “greens,” the next season’s efforts, on their land in Foxtrap, half an hour’s drive west of St. John’s.

Before the Taylors can put seal meat aboard the truck to sell, they have to meet standing orders for around 3,000 flippers for traditional fundraising “flipper dinners” held by local church groups and service organizations. Now that they’ve been taken care of, whatever else now comes their way will be sold on the street.

If you are lucky enough to get your feed of flippers this year, dredge them lightly in flour and then brown them in some fat rendered from salt pork. Salt and pepper and then braise them in just so much water, covered, with a small onion and one chunked carrot per seal flipper for 90 minutes at 325°. To make a pie, cover this with a butter-laden biscuit pastry batter (leavened with baking powder), and return to the oven for 30 minutes at 425° until it has a crust. Serve with abundant black tea.