A Recipe To Riches dinner party

I have never seen an episode of Recipe to Riches, the Food Network Canada show now in its second season. But I really like the premise: Thousands of Canadians cook up their best home recipes to compete in seven different categories (think savoury snacks, cookies and squares and entrees). In each of the seven episodes, one winner is chosen from the three finalists in each of those seven categories. At the end of the season, that leaves seven winners, all of whom take home $25,000 and have their recipe turned into a President’s Choice product that’s sold in grocery stores across the country.

Tonight (Dec. 12 at 9 p.m. ET/8 p.m. PT) the country gets to vote on which of these seven dishes they think is the best. The final winner stands to win $250,000–the largest cash prize in Canadian reality show history.

I hosted a dinner party with all seven dishes so that we could judge the PC products for ourselves. Four Maclean’s staff memebers ranked each product from the best (7) to the worst (1). On the show, “recipes are judged based on taste, presentation, originality, the story behind the recipe and its suitability to become a mass produced grocery store product.”  Our judging criteria? Taste, and taste alone, although it was hard for our science writer not to comment on the appearance of the food and our art director to ignore the packaging of the products. The three panelists I chose have never judged food professionally. They are lay people, much like the consumers to whom these products are presumably marketed. I advised them to consider whether or not they would be enthusiastic about recommending each dish to a friend to buy.

Jessica Darmanin, Associate Photo Editor
Takes a lot of photos to illustrate the magazine, plus does a ton of photo research when she’s not out taking pictures; Loves grocery shopping at No Frills. The only vegetarian on the panel, but tried everything. Favourite frozen foods include “seafood medley” and spinach.

Stephen Gregory, Art Director
You know the cover of the magazine every week? This guy makes that, plus he oversees the design of every other page. Very new to frozen foods, but has discovered the world of endless possibilities that is Dr. Oetker’s frozen pizza. Also, ate Campbell’s tomato soup in his youth.

Jessica Allen, Assistant Web Editor
Writes arts and culture stories and the “Eat It Up” food blog. Worked in restaurants for 10 years before coming to Maclean’s. Favourite packaged and frozen foods include too many to list. (But Dr. Oetker makes an appearance at least one night a week at my place.)

THE SEVEN CATEGORY WINNERS (in the order that we tasted them):

Verdict: If I brought this home, I wouldn’t feel comfortable serving it to anybody.

Verdict: Although Darmanin liked the size and “the back and forth between crisp to jam,” Lunau was horrified by the appearance of the cups, even the morning after our dinner. And I assumed, on account of the mozzarella, that this one was an appetizer, which it is not. It’s a dessert. This one may have divided the Maclean’s panel the most.

Verdict: The best savoury sampling, both texturally and flavour-wise, of the night. Still, they left us desiring another level of flavour.

4. Triple “S” Korean Meatballs, by Jackie Koh of Vancouver, B.C. (Hors d’Oeuvres)
The PR promise: This Korean-inspired meatball recipe begins as a simple blend of beef and pork, but the final creation is a deliciously complex combination of flavours–sweet, spicy and savoury. These succulent meatballs are fully cooked, so you can enjoy them in minutes–perfect as an hors d’oeuvre.

Verdict: So promising out of the oven, but texturally, these were a nightmare. And flavour-wise, it felt like the initial blast of spice fooled you into thinking it was tasty, but after that one note, these balls left us hanging.

5. Butter Chicken Lasagna, by Rick Matharu of Brampton, Ont. (Entrées)
The PR promise: True to its creator’s roots, this extraordinary lasagna is made with tandoori-spiced seasoned chicken in an Indian-inspired sauce made with garam masala, sautéed red onions, green peppers and mushrooms–a deliciously irresistible fusion of fragrant flavours.

Verdict: I’ve always felt funny about ground turkey and chicken. When I peeled back the pasta to examine the ground chicken, we were all shocked at its purple-tinged colour. Do not make the mistake of dissecting it.

Verdict: Initially, we were all very excited about the brownies. We were unanimous in them being the best thing we’d tried so far. But each of us could only manage a sliver. It’s pretty rich.

The PR promise: Like its creator, this is a real treat. Almonds, cashews, pine nuts and sesame seeds topped with buttery toffee and milk chocolatey buttons, all on a graham cracker crust.

Verdict: Seeing that this was the only dish the four of us polished off, Harquail’s toffee was the clear winner.

In short, “everything tastes mass-produced and cheap, like they only plan on selling it for a couple of months,” said Lunau, a sentiment I think we all shared. I wonder if something was lost once these recipes were mass-produced. I can not–will not, in fact–believe that Laura Calder, one of the show’s four judges, tasted the versions of these dishes that we did and said favourable things about them. I think the sad truth of it all was best summarized by, perhaps surprisingly, our art director: “The problem here,” said Gregory, “is that they’ve taken something personal, a moment of cooking creativity that may say something about the individuals or their lives or just their desire to put some random s–t in a blender and see how it tastes, and applied god-knows-what industrial processes to it and spat out a ground-up, imperishable, never fail (or succeed), too sweet or too salty (or both at once) perverted version of it.”

THE RESULTS! (click on the chart to enlarge it)

AND DON’T FORGET TO TAKE A LOOK AT HOW THE NIGHT ROLLED OUT IN PHOTOS: 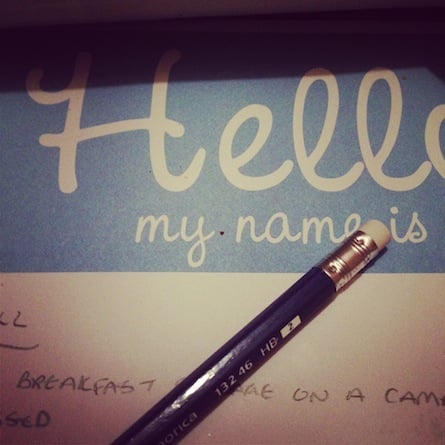 Getting ready to record our tasting notes