The marriage secret: it makes you richer and happier

With marriage rates in decline in Canada, why is no one talking about the benefits? Marriage is both a poverty fighter and predictor of success. 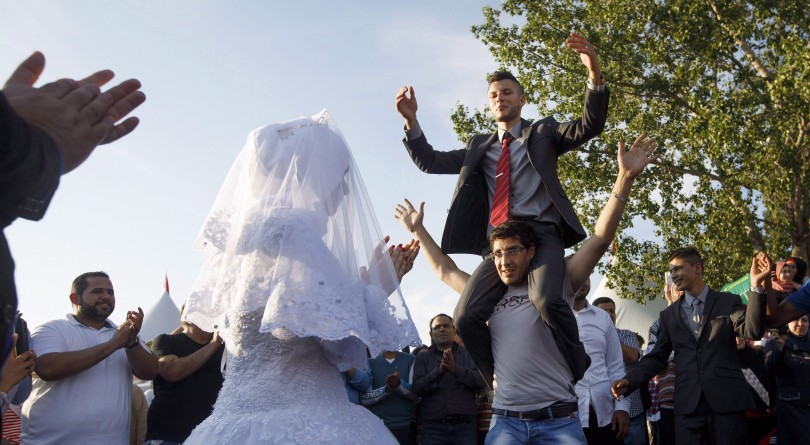 Manar Shakeouf watches as her husband Mostafa Khalis is carried around during a traditional Syrian wedding ceremony in Edmonton, Alta, on Saturday Aug. 5, 2017. (THE CANADIAN PRESS/Jason Franson)

According to a recent poll, Canadians claim to be in favour of greater inequality, more poverty and lower overall happiness. If that sounds like a strange set of values, it’s probably because most Canadians don’t realize how important marriage really is.

Earlier this week a survey of 1,520 Canadians by the Angus Reid Institute asked “When two people plan to spend the rest of their lives together, how important is it to you that they legally marry, meaning exchange vows in a public ceremony, whether civil or religious?” Fifty-three per cent said it wasn’t important. According to the pollster, this means a majority of Canadians now think “marriage is simply not necessary.”

Evidence that the institution of marriage is in decline hardly counts as news anymore. Marriage rates have been sliding for decades. In 1981, over 60 per cent of Canadians above the age of 15 were married; today that’s fallen to 45 per cent as cohabitating couples and lone parent households rise in step. The fact a majority of Canadians now think legal marriage is obsolete looks to be the logical conclusion of this long-term trend.

And yet a closer examination of the evidence suggest Canadians may not understand the real implications of getting hitched. Beyond the ring and the ceremony, marriage offers substantial and persistent benefits in terms of health, wealth and well-being for both spouses and their children. Many of these advantages are not present to the same degree in cohabitation arrangements—despite the fact Canadians apparently don’t see any difference between the two types of relationships. Marriage, in other words, is worth shouting about. So why isn’t anybody shouting?

Financial issues figure prominently in the Angus Reid survey as explanations for the waning interest in marriage versus living as a couple. Nearly half (47 per cent) of young men aged 18 to 34 years said a lack of financial stability was a major reason for why they’re not currently married. Among women the same age, insufficient financial resources was a major reason for 39 per cent. And asked if it was likely more people would get married if the cost of weddings was not so high, 61 per cent of all respondents agreed.

Entire television channels appear to be dedicated to promoting the notion that weddings have become impossibly elaborate and expensive. But it would be a grave mistake to put off or abandon marriage simply because of the cost of a chocolate fountain for the reception hall. If financial stability is your goal, the best advice is to get married as quickly as possible. Rather than an economic burden, marriage is a powerful insurance policy against poverty.

READ MORE: The worst age for women to have kids in terms of career

One of the few groups in Canada to make a crusade out of proclaiming the benefits of marriage is Cardus, a faith-based think tank based in Hamilton, Ont. It’s 2014 report “The Marriage Gap between Rich and Poor Canadians,” by former Statistics Canada chief economist Philip Cross and researcher Peter Jon Mitchell, parses census data to lay bare the powerful connections between marriage, income and inequality−those who marry are far more likely to end up atop the heap.

“The differences in marital status between income groups is quite dramatic,” the study observes.

Significantly, these results are not simply because the top quartile is filled with older, more successful couples. Rather married couples of all ages tend to accumulate in higher income brackets. Marriage is thus a marker of success, not age. The authors also show the ‘marriage gap’ effect on income distribution is growing over time. Inequality, from this perspective, is exacerbated by a sharp decline in marriage rates among lower income groups.

While living as a couple can offer many advantages in terms of expenses and savings, ample research confirms significant differences between married and cohabitating spouses, particularly with respect to financial arrangements. Married couples, for example, are far more likely to pool their money into one pot and treat their combined finances as a single, cohesive planning unit. This streamlines budgeting and signals a deeper commitment to family priorities. Common law partners are less likely to pool their money, and hence display a weaker form of family commitment.

The financial planning gap between married and unmarried couples holds even when cohabitation becomes the dominant type of family formation. Consider Quebec, where attitudes towards marriage differ significantly from the rest of Canada—a majority of babies in Quebec, for example, are born to cohabitating spouses rather than married couples. Yet research in the Journal of Marriage and Family finds the same differences in resource pooling between married and cohabitating couples within and outside Quebec.

In the U.S., where the relative success of racial groups is an area of intense focus, research by the Brookings Institution points to the “success sequence” as a key factor in avoiding poverty. This refers to a multi-stage process of finishing high school, getting a job, getting married and then having children. Do these steps in this order and your chances of entering the middle class or higher rise dramatically, regardless of race.

Recent work by the Institute for Family Studies shows that among Americans aged 28 to 34 who failed to complete the sequence in order, 53 per cent were poor. By comparison, those who followed the traditional path to adulthood had a 90 per cent change of being middle class or above. Marriage is the central aspect of this sequence; and as a defense against poverty it is an option available to all in a way that a college education – another indicator of future success – may not be. (Although children from married homes are more likely to graduate college.) Being married combines “sex, parenthood, economic cooperation and emotional intimacy into a permanent union,” observes Bradford Wilcox, a University of Virginia sociologist and co-author of the above report. It also makes you happy.

Research published last year by two economists from the Vancouver School of Economics at the University of British Columbia examines the impact marriage can have on reported happiness and life satisfaction levels of married couples. “Those who marry are more satisfied than those who remain single,” say professors Shawn Grover and John Helliwell. Significantly, marriage offers a welcome bulwark against a mid-life crisis. Happiness surveys around the world consistently show a U-shaped trajectory for life satisfaction, with the lowest point coming in the late 40s or early 50s. “The social support provided by a spouse helps ease the stress of middle age” the authors report. And while couples in common law relationships do better than singles when navigating sagging middle-aged fortunes, married couples again display noticeably better results.

Other avenues of research on marriage have shown it to have a powerful effect on health as well as the future success of children. But given this lengthy list of benefits arising from marriage, why isn’t all this information more widely available? When is the last time anyone (other than your mother) explained to young Canadians the additional and substantial advantages that arise from being married as compared to cohabitating?

The absence of a broader political or public debate regarding the vast returns to marriage is striking. Our governments are certainly not shy about telling us how to live our lives in so many other regards. We are constantly nudged, poke and cajoled to make healthy choices and avoid unhealthy behaviours: what to eat, what not to eat, how to get to work, how much to exercise, what to recycle, how to treat your neighbour etc. etc. And yet when it comes to informing the public about the tremendous personal and social benefits arising from marriage … well, nothing but crickets.

Of course no one wants government officials forcing single mothers into unwanted relationships. Marriage remains a deeply personal decision that can only be entered into by two committed individuals. But marriage is also a powerful poverty fighter and a surprisingly reliable predictor of future success, stability and happiness. Why keep that a secret?

At the very least, someone should tell young men and women to stop worrying about how much weddings cost. Whatever the upfront price, this is one deal that pays off big time in the long run.