The quest to fix Quebec's wines

It has a reputation of being a wine hinterland. But Quebec’s 30-year-old industry is finally growing–almost despite itself 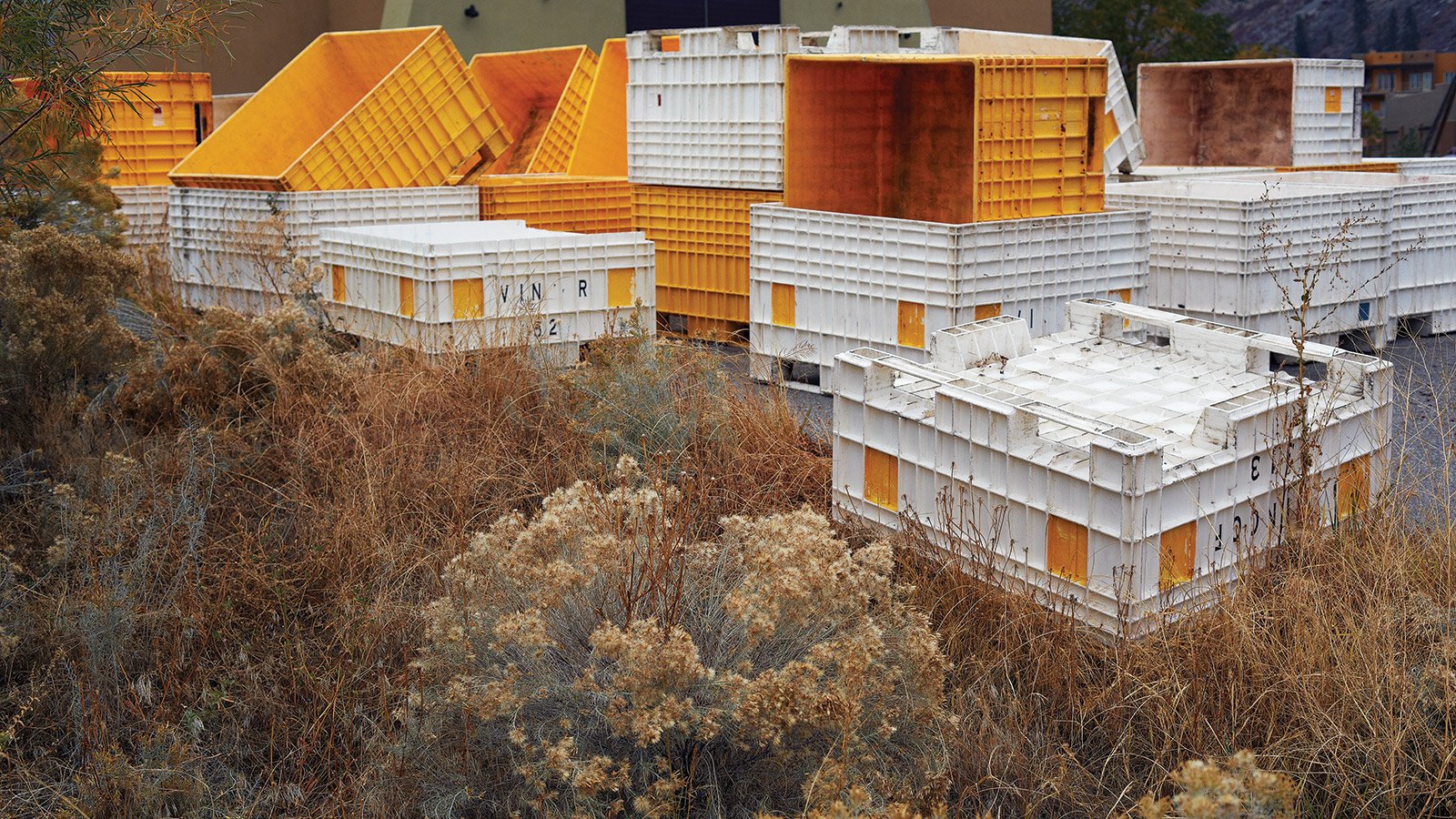 Since 1997, Anthony Carone has coaxed pinot noir from the ground in Lanoraie, Que., a place wholly unsuited to the notoriously temperamental grape. Every November, he prunes all but four of the winery’s 4,000 vines down to stubs. He pins the remaining four, which he selects for their ability to bear plentiful, sweeter, top-of-the-vine fruit, to the ground. He then buries each under a foot of earth. The resulting mound, he hopes, will keep the vine at a consistent -5° even as the temperature outside at times flirts with -40°.

In summer, he has the opposite problem at his winery on the northern banks of the St. Lawrence about 70 km east of Montreal. Hot, wet summers bring the threat of blight and mildew; each vine must be regularly cleaned because the thin-skinned grapes are so prone to disease. Intense heat, like that of last July when the town recorded 17 days of above-average temperatures, will burn the crop. Last year, he left the west-facing leaves untrimmed so that the grapes would be shaded from the day’s most intense sunlight.

This process yields about 2,000 litres—about 2,600 bottles—of light, airy pinot noir that’s more reminiscent of Old World French wine than its North American cousins. Production is small and, at $36 a bottle, the price is high. It won silver at the 2010 InterVin International Wine Awards; Daenna Van Mulligen of winescores.ca, in awarding it four out of five stars, noting its “loads of lilacs and rose petals, raspberry and vanilla notes.”

Carone, a compact 47-year-old ball of energy with grey hair and an off-putting stare, shrugs off the wine’s steep price relative to other Quebec wines. “I’m the only one to produce a full pinot noir in Quebec,” he says from a table in Carone’s tasting room, in between bites of dark chocolate and prosciutto. “At first, everyone said we can’t do wine at all. Then it was, well, we can do whites. Then it was we can do icewines. Now we’re producing decent reds.”

He flashes that stare of his. “The target is moving,” he says.

Carone, like many Quebec vintners, tends to do things out of either doggedness or spite—fighting against climate, sometimes other producers and the prevailing belief that, well, Quebec is and will forever remain a wine-making hinterland. Quebec isn’t thought to do wine. Blueberries? Corn? Apples? Political scandals? Sure. Decent wine? Not so much.

Carone’s yearly dance with pinot noir is a somewhat exaggerated example of why this may be. When it isn’t buried under snow, Quebec is either being drenched by rain or baked by an unrelenting sun. The growing season is too short, and the downtime too long, to produce anything worth fermenting.

Yet skipping over Quebec wine is to deny the palate, for some of the province’s 100-odd wineries are producing some very respectable whites and reds.

In many ways, Quebec in 2013 is where Ontario was in the mid-’80s; strewn with disparate, stubborn winemakers eager to overcome their backwater reputation. Unlike Ontario, where winemakers benefited from promotion by the Grape Growers of Ontario wine association, Quebec has two winemaking associations that are completely at odds on how to move forward.

Grapes have grown in Quebec for centuries. When Jacques Cartier first saw Ile-d’Orléans in 1535, the mouth-shaped island in the St. Lawrence was overrun with native vitis riparia grapes. He called it Ile de Bacchus, even though the small blue grape was unsuited for wine. The province’s first winery, Côtes d’Ardoise (“slate hills”), opened in 1981 in Dunham, which sits in the valley between Sutton and Bromont mountains in the Eastern Townships. It did so illegally; the Quebec government had yet to devise a licence for residents to make alcohol, let alone sell it.

Then Charles-Henri de Coussergues, an agricultural exchange student from the Languedoc region of France, arrived in 1982. Languedoc was in the midst of a crisis because demand for its cheap table wine had collapsed; essentially, the French were becoming wine snobs. De Coussergues bought a 20-hectare dairy farm just down the road from Côtes d’Ardoise and began making and selling wine from the premises.

Today, his is the largest winery in the province, producing upwards of 160,000 bottles of white, red and ice wine every year. Wild-haired chansonnier Gilles Vigneault, a friend of de Coussergues’s partner, baptized it L’Orpailleur (“panner for gold”), a nod to the many rivers that flow nearby. At one of the main stops on the area’s wine route, de Coussergues is clearly frustrated by the quality of the wine in the province.

“Some producers think that if you put a fleur-de-lys on the bottle, Quebecers will buy it,” he says, shaking a meaty finger in the air. “Ah, non. We need to know that we have competition, and it’s the world.”

The trouble is Quebec’s 107 or so wineries can’t agree on how exactly to meet that challenge. It is a fundamentally divided industry, with the more established Association des Vignerons du Québec (AVQ) challenged by the upstart Vignerons Indépendants du Québec (VIQ), founded in 2006. Winemakers are a stubborn bunch, and there are many sticking points. But one of the main ones is certification and what varietals should and shouldn’t be part of it.

Standards are inconsistent. In 2007, an attempt to create a Canada-wide Vintners Quality Alliance (VQA) stalled; Ontario and British Columbia wanted nothing to do with hybrid grapes­­—thought to be of lower quality­—and objected to the method many wineries used to harvest ice wine grapes. The AVQ has its own certification process, though only 22 wineries take part.

Then there’s the climate. Quebec is cold. Ontario and British Columbia less so. The crux of the argument is what, exactly, Quebec wine should be. People like Carone say Quebec will only be recognized as a true winemaking region when its wineries adopt the vitis vinifera grapes grown in Europe. The first commercial crop in Canada was planted in Ontario’s Niagara Region in 1978.

De Coussergues, along with a majority of the province’s winemakers, feel hardier grape hybrids—like frontenac, a variety developed at the University of Minnesota expressly for cold climates—make excellent wine, and Quebec producers shouldn’t copy the Old World. “Our climate is part of our wine,” de Coussergues says. “You have to adapt to the environment you work in.”

Michael Marler, co-owner of the well-regarded Les Pervenches in nearby Farnham, is torn. He grows hybrids (frontenac, marechal foch and zweigelt are staples), but says the reds aren’t good enough since the grapes can tend toward brutishness. “White wines are generally well made from quality grape varieties, yet a lot of winter-hardy hybrid red grapes have been planted and I’m not convinced that it is with these varieties that we will increase our reputation.”

It’s worth remembering that Ontario didn’t shake its spotty winemaking reputation by aggressive marketing alone. Many of the province’s winemakers, with the help of a federal subsidy, ripped out their hybrid vines in the late ’80s, replacing them with vitis vinifera varietals like riesling and chardonnay. In Quebec, this would mean a backbreaking, low-yield crop like that of Carone’s, with prices to match.

In short, the province is stuck, says master sommelier and wine writer John Szabo. To be sure, he is a fan. He says Les Pervenches is “exciting,” and namechecks Quebec’s Clos Saragnat (“excellent vin de paille,” a dessert wine), the riesling from Domaine Les Bromes, the whites at L’Orpailleur, the late-harvest and icewines of Vignoble du Marathonien. Yet there is “little to no market outside Quebec” for the hybrids, while the climate makes the cost of producing a truly great red too high to be worth it. Quebec, Szabo says, should stick to “icewine, ice cider and a few whites.”

At the Gagliano Vineyards next door to L’Orpailleur, Alphonso Gagliano bristles at the suggestion that Quebec-friendly grapes aren’t up to snuff. “Canada can compete with California and Europe in terms of quality, but not with the same types of grapes. It’s unrealistic,” he says.

The former Liberal cabinet minister only grows hybrids on his 10-acre winery. His tinello, a blend of frontenac and sabrevois grapes, came second out of 16 Canadian and international wines in a blind taste test put on by La Presse in April 2012. “They thought tinello was a pinot noir,” Gagliano chuckles.

A pinot from Quebec. Imagine that.