The resurrection of John Galliano? 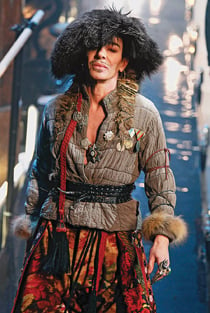 Earlier this month, a Paris court found fashion designer John Galliano guilty of “public insults based on origin, religious affiliation, race or ethnicity,” for his now-notorious anti-Semitic rant in a Paris café.

It was, of course, a crime for which the disgraced designer had months ago been sentenced in the court of public opinion, and rightly so. The diatribe in which he slurred “I love Hitler” in the faces of a couple of astonished women was caught on video and later posted online. After Galliano’s arrest in February, for which he was dropped both as head of the House of Dior as well as his own eponymous label, his career prospects seemed forever dashed. But now that the court case is over and the dust is beginning to settle, some fashion world observers are speculating that a comeback might be in the cards. “Given how superficial the fashion world can be—and how cynical—it could be that Galliano’s very notoriety makes him a short-term money-spinner,” Telegraph deputy fashion editor Luke Leitch wrote last week after the verdict came down.

The court found the designer guilty after hearing testimony from patrons who’d experienced Galliano’s abuse on several separate occasions over the past year. Plaintiff Geraldine Bloch testified that the designer remarked on her “dirty Jewish face” and called her a “ ‘dirty whore’ at least a thousand times” in a 45-minute rant as she shared a drink with a friend on the patio of La Perle, an establishment located in the Marais, the lively gay district and historic Jewish quarter of Paris. And another victim, Fatiha Oummedour, told the court of a separate occasion on which an inebriated Galliano taunted her as “ugly Jewish” at the same café a few months earlier.

Galliano was given a suspended $8,100 fine, which means the conviction will appear on his record but he will not be required to pay the court unless he reoffends in the next five years. As punishments go, it was a remarkably lenient one. The designer’s crime carried a maximum penalty of $30,000 and a six-month prison sentence. The presiding judge, who noted the “values of respect and tolerance to which the defendant generally adheres” in his work, also stated the British designer had “sufficient awareness of his act despite his triple addiction and fragile state.” During testimony, Galliano expressed deep regret over his actions but claimed he had no memory of the events, due to an addiction to alcohol, sedatives and Valium. His lawyer also highlighted the fact that, since the scandal broke, he has spent two separate periods in rehab, one in Arizona and the other in Switzerland.

How far these high-end detox stints actually went toward curing the fashion icon of his professed anti-Semitism is not entirely clear, but Galliano certainly has his apologists. Shortly after the scandal, the New York stylist Patricia Field dismissed his outbursts, calling them “theatre” and “farce.” And more recently, Kate Moss employed Galliano to design the much-anticipated dress for her wedding to Jamie Hince, guitarist for the British band the Kills. “When I put the dress on, I’m really happy. I forget about everything. [I wanted] a classic Galliano, those chiffon thirties kind,” the supermodel, who rarely gives interviews, gushed in U.S. Vogue. Galliano, for his part, was slightly more contrite. “She dared me to be John Galliano again,” he said of Moss. “I couldn’t pick up a pencil. It’s been my creative rehab.”

The July wedding, attended by such fashion luminaries as U.S. Vogue editor Anna Wintour, Mario Testino and Marc Jacobs, was Galliano’s first major appearance since his arrest and dismissal. When the father of the bride thanked the designer in his speech, Galliano received a standing ovation, moving him to tears and making his widely rumoured comeback seem all but imminent.

It wouldn’t be the first time Galliano came back from the dead. Brought up in hardscrabble south London, the son of a plumber from Gibraltar and his Spanish wife, Galliano has long been a beloved underdog in the rarefied world of haute couture. In his youth, he found a champion in Wintour (who helped resurrect his career in the early 1990s by arranging financial backing after he ran into money troubles), and his legendary penchant for outlandishness—both behavioural and sartorial—was long regarded as simply part of the eccentric Galliano package.

While some members of the fashion elite seem willing to welcome Galliano back into the fold, it seems unlikely others will soon forget his bad behaviour. When the scandal broke, the Jewish actress Natalie Portman, the face of the perfume Miss Dior Cherie, released a statement saying she was “disgusted” by Galliano’s comments. And the Guardian’s fashion columnist Hadley Freeman (who is also Jewish) condemned those fashion writers and celebrities who attempt “to conjure up pity for Galliano claiming that he’d always been encouraged to be ‘controversial’ by his bosses and, golly gosh, it’s so lonely at the top where all one can do for entertainment is spout hate speech.”

Whether last week’s lenient verdict will lead to another high profile post for Galliano anytime soon is not yet clear. But his lawyer, Aurelien Hamelle, speaking after the trial, confirmed things were looking up. “This is a good decision. It amounts to no penalty,” adding his client’s mood was “serene, relieved and pleased that this is all behind him. He hopes to face the future with happiness and forgiveness.” Amazing how quickly the spectre of such ugliness can fade in an industry obsessed with beauty.