Did a missed pull-up cost Bennett the No. 1 NHL draft spot? 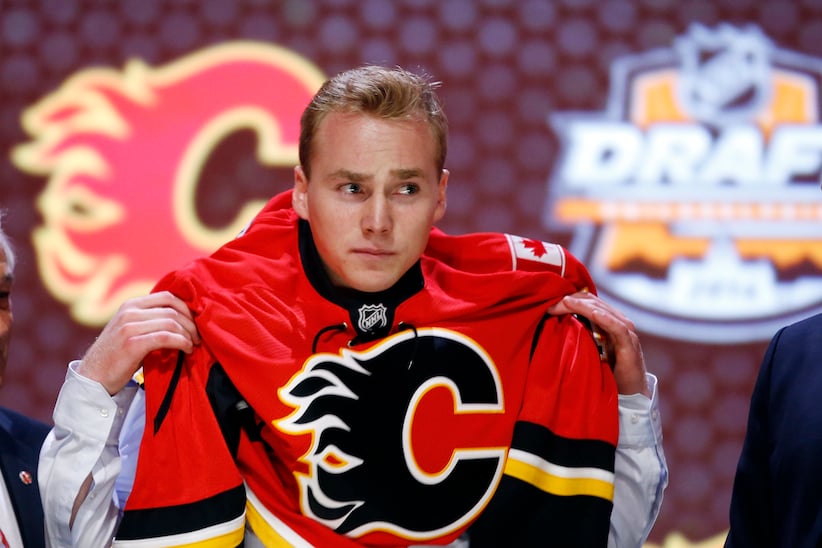 Samuel Bennett pulls on a Calgary Flames sweater after being chosen fourth overall during the first round of the NHL hockey draft on Friday, June 27, 2014, in Philadelphia. (AP Photo/Matt Slocum)

PHILADELPHIA — It is a measure of how poised top hockey prospects are—how prepared, controlled and rehearsed—that this is what passed for controversy in the run-up to the 2014 NHL draft.

One failed pull-up at the NHL combine and Samuel Bennett was in question. Was he tough enough? Was he serious about playing NHL hockey? Had dozens of scouts who braved arena coffee in the Ontario Hockey League so they could watch the ferocious 18-year-old set the competition ablaze—had all those guys muffed it?

No general manager would say so in Philadelphia this week. But you have to wonder.

Bennett, a dazzling, tireless centre with the Kingston Frontenacs slid three spots from his presumptive No. 1 ranking, and was picked fourth overall by the Calgary Flames. His family members, including his grandparents, waited anxiously in the stands to hear his name. So did Bennett.

“Those minutes started to feel like hours,” he later acknowledged. “But to end up in Calgary, I really couldn’t be happier. I’m going to do everything I can to make that team come training camp.”

The slip will have little effect on Bennett’s career. He’s still a big draw for endorsement deals by dint of his top-five selection. He remains a star in the making.

But it does provide an intriguing glimpse into fear that grips management types as they draw closer to that moment when commissioner Gary Bettman calls their team’s name. Herd mentality, you might call it. Or just plain anxiety.

The background: Bennett was rated all year as the No. 1 prospect among North American skaters in the NHL’s draft rankings. The youngster from Holland Landing, Ont. was counted by many as one of two or three ready to make the leap to the NHL this season, and by spring looked like a no-brainer for the Florida Panthers, who had the first-overall slot.

All that changed, though, when he stepped up to the high bar at the late-May NHL combine—an annual meet where top prospects submit to physical and psychological tests for the benefit NHL managers mulling their draft options.

The idea of this exercise is to show yourself off at your sinewy best. Some players can do more than a dozen pull-ups, but when Bennett approached the bar, everything went pear-shaped. He grunted and strained and the veins on his neck bulged. But try as he might he just couldn’t get his chin to the bar.

Publicly, scouts who’d followed him claimed it hadn’t affected their opinion. Four days before the draft, Dan Marr, the head of the NHL’s central scouting department, told the Buffalo News that Bennett remained his pick to go first overall.

Behind closed doors, though, it was a different story. Thursday evening, during a last-minute interview in the basement of a downtown Philadelphia hotel, senior hockey staff with the Panthers, including GM Dale Tallon, asked Bennett how he’d dealt with the issue.

He told them that he took it seriously, that he’d seized it as an opportunity to prove his critics wrong. He pointed to a sequence he’d taped for TSN that was to run later that night in which he did five pull-ups.

Indeed, he’d taken it more than seriously. The day of the combine, he set about working on pull-ups, says his agent Darren Ferris, and while Bennett kept a brave face, telling reporters it wasn’t a big enough setback to distract him, his parents knew better.

“I knew right away he’d be embarrassed by that,” his mother Diane told Maclean’s. “He likes to succeed in everything he ever tries. Now we can joke about it, but when it first went down it was like, oh, buddy, yikes.

“The fact that some people in the media doubted his motivation made me think, ‘Oh God. They don’t know Sammy at all.’”

Said Bennett’s father Dave: “In the end, I think it was not a bad thing. It was something to kind of toughen him up, so he doesn’t take everything for granted.”

Thus begins a new chapter in Bennett’s story, and one that holds much hazard for Florida, Buffalo and Edmonton, the teams who took a pass on the speedy youngster.

Bennett racked up 91 points in 57 games this season. He became known for his relentlessness on the attack. He took 118 minutes in penalties, few of them the bone-headed variety, and while nobody noticed, he aced most of the other strength and fitness tests at the combine.

In short, work ethic is not an issue with Bennett, and if the brain trusts of three franchises read the pull-up fail as lack of work ethic, they may have miscalculated badly. “I’d hate to be the team that passed on Sam Bennett,” said Ferris, who has been in the hockey representation business for two decades, told me, and it didn’t seem self-serving. “The kid is special. What he does out there, his enthusiasm for the game, is infectious. This kid will be a culture-changer for his team.”

Watch Maclean’s and Macleans.ca for more coverage of Sam Bennett’s effort to be on the ice when the puck drops for the 2014-15 NHL season. Follow @ChasGillis on Twitter.